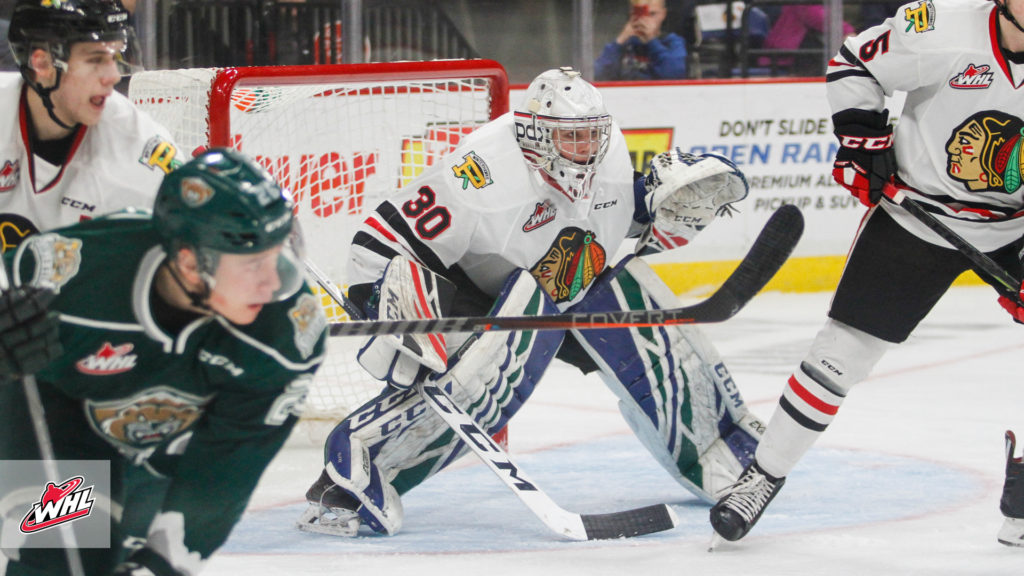 1. Baron Thompson, Brandon Wheat Kings: Brandon Wheat Kings forward Baron Thompson scored the first hat trick of his WHL career Saturday as the Wheaties swept a two-game home set against the Kootenay ICE with a 7-5 victory. Thompson scored the third, fourth, and sixth goals of the game at even strength for the Wheat Kings, securing the fourth game-winning goal of his WHL career in the process as well.

3. Eric Florchuk, Saskatoon Blades: Washington Capitals prospect Eric Florchuk of the Saskatoon Blades scored twice Saturday as the Blades secured a home-and-home sweep of the Regina Pats with a 4-2 victory at the Brandt Centre. Florchuk scored the first and third goals of the game for the Blades, earning his third multi-goal game of the season. 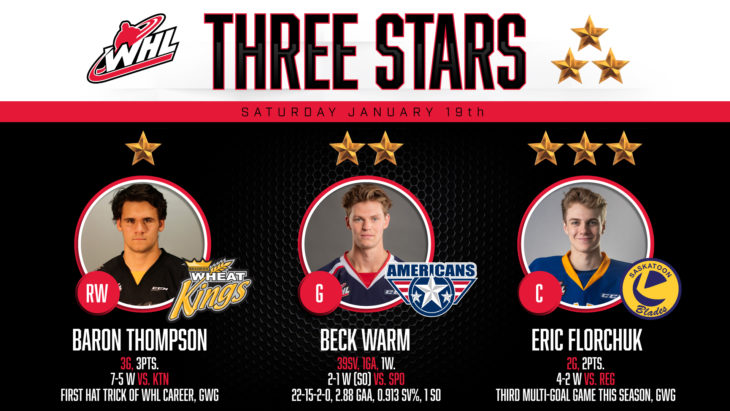 While the ICE ultimately fell to the Wheat Kings, a bright spot was found with 2018 WHL Bantam Draft second-overall selection Carson Lambos scoring his first career WHL goal. Jaegar White scored twice, while Jakin Smallwood and Austin Schellenberg also put up scores on the board for the ICE.

Taking the win in both games of a home-and-home series this weekend, the Saskatoon Blades beat the Regina Pats 4-2.

Starting the game strong, Eric Florchuk (Washington Capitals) scored twice and Cyle McNabb added a third goal to lead the Regina Pats after two periods. Coming out for the third period with a different game in mind, Duncan Pierce capitalized on a penalty shot by going backhanded on Saskatoon’s Nolan Maier, to put the Pats on the board, early in the third period. Regaining the Blades’ three-goal lead, McNabb scored his second goal of the night, recording his third goal as a Saskatoon Blade. Exploiting another short-handed opportunity for the Pats, Riley Krane scored on his second attempt of a breakaway, finishing the score 4-2 in the Blades favour.

Earning his second win of the weekend against the Pats, Maier stopped 31 of 34 shots.

In the second half of a home-and-home series, the Medicine Hat Tigers defended home turf with a 5-3 win, scoring twice late to send the Swift Current Broncos to a heart-breaking defeat.

Three first-period goals had the Tigers rolling early as Nick McCarry’s first WHL goal, as well as goals from Dylan MacPherson and 2019 NHL Draft prospect Brett Kemp, put the home side into a comfortable 3-0 lead. The Broncos would chip away gradually though as goals from Owen Blocker and Ethan O’Rourke finishing off a nice passing play, and a blast from the point on the power play by Connor Horning tied up the game with 9:38 to go in the third.

However, a shot from the blue line by Trevor Longo just inside the final minute of regulation beat Isaac Poulter to put the Tigers ahead for good. Captain James Hamblin closed out the game with an empty-net goal.

Elijah Brown picked up a pair of helpers with four other Tigers added a single assist. Ian Briscoe contributed a pair of assists for the Broncos in the loss.

On Sportsnet’s Saturday Showcase, the Edmonton Oil Kings extended their undefeated-in-regulation streak to five games with a 3-2 win against the visiting Calgary Hitmen.

Sporting some sharp threads for the first RE/MAX Presents: WHL Suits Up with Don Cherry to promote Organ Donation game, the Oil Kings opened the scoring via 2019 NHL Draft prospect Matthew Robertson, who had the lone goal of the first. Carter Souch made it a 2-0 game early in the second, but Luke Coleman responded for Calgary to keep the advantage at one after 40 minutes.

In the third, 2019 NHL Draft prospect Vladimir Alistrov notched the game-winning goal on a feed from behind the net by Souch while Carson Focht brought the Hitmen back within a goal later on in the period.

Dylan Myskiw stopped 25 of 27 shots for the victory, beating out Jack McNaughton, who stopped 24 shots in the narrow loss. Oil Kings defenceman Conner McDonald added a pair of assists to reach 100 points for his WHL career.

In a close game between second and third placeholders in the Central Division standings, the Lethbridge Hurricanes pulled ahead to the second place position with a win over Red Deer Rebels by a 2-1 score.

In the first period, Red Deer’s captain Reese Johnson managed to get a pass to Alexander Alexeyev (Washington Capitals), from his knees to which Alexeyev was able to bomb a shot from the blue line where Jeff de Wit tipped it in for the Rebels first and only goal of the night. Responding with goals in the second and third period, Lethbridge would hold out with a 2-1 win.

A sharp shot from the blue line by Jake Leschyshyn (Vegas Golden Knights) put the Hurricanes on the board in the second period and a goal from Jackson Shepard would seal the deal in the third for Lethbridge.

Holding onto the win for the Hurricanes was Lethbridge-native Carl Tetachuk, who stopped 35 shots.

B.C. Division rivals fighting for fourth spot had the Kamloops Blazers win 3-1 over the Cougars in Prince George.

A beautiful two-on-one play between Kyrell Sopotyk and Kobe Mohr earned the Blazers their first goal of the night. In the second period, Kamloops’ Connor Zary found a loose puck after a broken play occurred and was able to bury the puck past Prince George. Responding just minutes later, Josh Maser cut the Blazers’ lead to one goal with his tipped shot. Returning the favour in the third period, 2019 NHL Draft prospect Martin Lang threw the puck in front of the net and scored to regain Kamloops’ two-goal lead.

Goaltender Joel Hofer (St. Louis Blues) came within 15 seconds of a shutout in his home debut with the Portland Winterhawks Saturday as they downed the Everett Silvertips by a 5-1 score.

Captain Cody Glass (Vegas Golden Knights) and WHL leading scorer Joachim Blichfeld (San Jose Sharks) each had a goal and two assists while Brendan De Jong (Carolina Hurricanes) scored in the 300th game of his WHL career to add to the special night.

All the scoring happened in the third period Saturday as Blichfeld opened the scoring 3:56 into the final period, followed 69 seconds later by Jared Freadrich’s seventh of the season. Glass struck with 4:41 left in regulation while Jake Gricius and De Jong scored empty-net goals.

A late strike by Jackson Berezowski broke up Hofer’s shutout bid, but the goaltender still finished with 33 saves on 34 shots for the win. 2019 NHL Draft prospect Dustin Wolf stopped 27 shots in the loss. Josh Paterson picked up an assist in his home debut with the Winterhawks.

Triggering a shower of stuffed animals, Noah Philp scored an easy one on the Royals, 15:07 into the first period, along with teammate Sean Richards who also scored, to put the Thunderbirds up 2-0. With D-Jay Jerome scoring the only goal of the second period, the Royals trailed by one heading to the third.

In that final period the two teams combined for seven goals, as Kaid Oliver, Igor Martynov, and Mitchell Prowse scoring for the Royals. In response, Matthew Wedman, Simon Kubicek and captain Nolan Volcan scored for the Thunderbirds, emerging with the well-earned 6-4 victory.

Seattle’s Cole Schwebius earned his third win of the season, stopping 18 out of 22 shots.

A pair of defencemen had the only goals through 60 minutes as Jett Woo (Vancouver Canucks) and 2019 NHL Draft prospect Bowen Byram tallied goals 2:28 apart in the first period.

Nearly three minutes into overtime, the Giants had wrestled control of the puck back from the Warriors and were working the puck around when Koch slipped past the Warriors’ defence, where Dylan Plouffe put the puck on his stick for the easy tap in, sending the Giants to the win column for their sixth-straight victory.

2019 NHL Draft prospect Trent Miner stopped 26 of 27 shots for the victory. Brodan Salmond turned aside 25 shots in the one-goal loss.

Milos Roman (Calgary Flames), Brayden Watts, and Tristen Nielsen also picked up helpers for the Giants while 2019 NHL Draft prospect Brayden Tracey had the lone assist for the Warriors.

For the second-straight night, the Kelowna Rockets took down one of the top teams in the WHL, beating the league-leading Prince Albert Raiders 4-3 in a shootout.

Regulation was a see-saw battle as the lead changed three times in the first 60 minutes of the game. 2019 NHL Draft prospect Aliaksei Protas opened the scoring, but fellow draft prospects Kyle Topping and Nolan Foote responded for the Rockets, leaving them up 2-1 after 20 minutes.

Goals from Dante Hannoun and Parker Kelly (Ottawa Senators) helped the Raiders regain the lead 7:52 into the third period, but a late blue-line blast from 2019 NHL Draft prospect Lassi Thomson would equalize the game with just over five minutes to go in regulation.

After no one won the game in overtime, they progressed to a shootout, where Foote had the only goal through three shooters for each side. Roman Basran added three stops to his 30 saves from regulation and overtime for the victory.

Tri-City Americans 2 at Spokane Chiefs 1 (SO)

In the closest meeting yet between the Tri-City Americans and Spokane Chiefs this season, the Americans took away the shootout win 2-1.

After 40 minutes of scoreless play, co-captain Jaret Anderson-Dolan (Los Angeles Kings) shocked the game after splitting the Americans’ defencemen and scoring a top-shelf goal for the Chiefs. But, just three minutes later, Parker AuCoin scored his 25th goal of the season on a rebound to tie the game. Running out of time with the game tied, the two teams headed into overtime where they continued to keep the game tied.

Winning 2-1 in a five-round shootout, Kyle Olson (Anaheim Ducks) and 2019 NHL Draft prospect Sasha Mutala were the heros for Tri-City, along with goaltender Beck Warm who advanced his shootout record to 8-1 and also stopped 39 of 40 shots in 65 minutes of play.