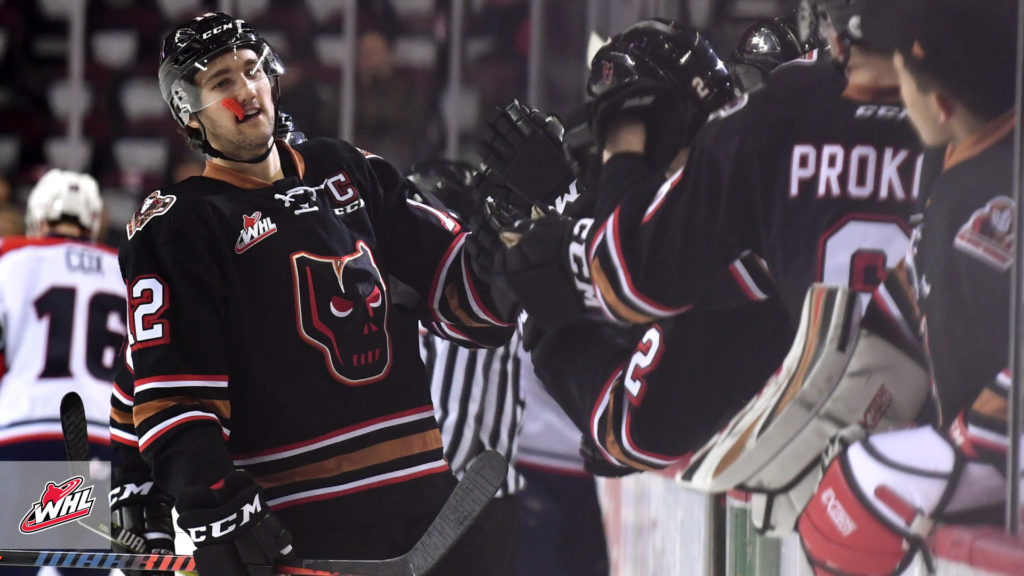 The rugged defenceman opened the scoring 5:30 into the first period before providing the primary assist on Connor Gutenberg’s overtime winner. In between, he sandwiched his third goal of the season and two more helpers.

With 11 points (3G-8A) in six outings, the five-year WHL veteran is well on his way to smashing previous career highs in all major categories – goals (5), assists (23) and points (28).

2. Max Gerlach, Saskatoon Blades: The 20-year-old product of Flower Mound, Texas did 100 per cent of the damage for the Blades Friday night, registering three goals in a 3-2 win over the Red Deer Rebels.

With seven goals in nine contests, the four-year WHL veteran is producing admirably for the Blades and finds himself planted firmly among the league leaders, tied for fourth in goal scoring.

3. Connor Dewar, Everett Silvertips: The 19-year-old prospect of the Minnesota Wild notched two goals and two assists as the ‘Tips knocked off the Edmonton Oil Kings by a 5-3 margin Friday night.

Dewar secured the primary assist on Bryce Kindopp’s game-winning goal, which broke a 3-3 tie with 2:59 to go in the third period. From there, Dewar – a product of The Pas, Manitoba – added an insurance goal with 1:41 to play. 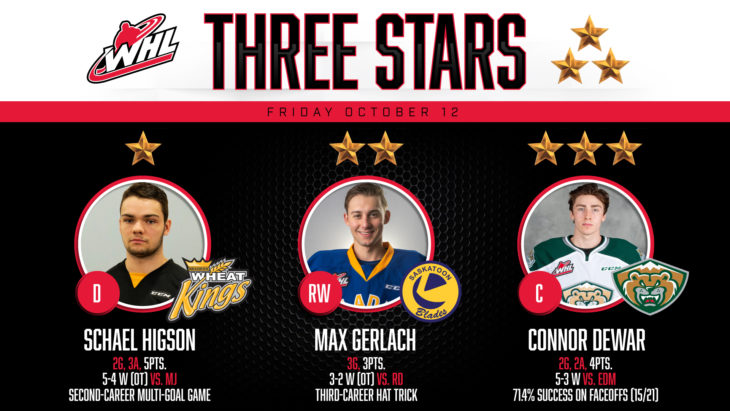 Luka Burzan struck late in regulation to force overtime before Connor Gutenberg’s third of the season gave the Brandon Wheat Kings a 5-4 victory over the Moose Jaw Warriors at Westoba Place Friday evening.

Trailing 3-2 heading into the third period, the Warriors tied the game courtesy Jett Woo’s first goal of the season before Tristin Langan’s seventh put them ahead with 3:49 to play. But it was Burzan, the former Warrior, spoiling the night for his former mates.

Wheat Kings defenceman Schael Higson finished with five points (2G-3A), while Langan (2G-2A) and Justin Almeida (4A) had productive evenings for the Warriors.

One might argue Friday’s outcome from SaskTel Centre was actually Max Gerlach outscoring the Red Deer Rebels by a 3-2 margin.

The product of Flower Mound, Texas did all the scoring for the Saskatoon Blades on Friday night, including a one-timer to tie the game with 16 seconds to go in regulation before adding the overtime winner with 1:16 to go in the extra period.

Dan Lambert’s latest return to Swift Current resulted in a 4-1 victory for the Spokane Chiefs over the Broncos Friday.

Jake McGrew (San Jose Sharks) and Riley Woods each tallied a goal and an assist while Bailey Brkin stopped 28 of 29 shots for his third victory of the season.

Eli Zummack had the lone goal of the first period and Carter Chorney’s second of the season doubled the Chiefs lead after 40 minutes. McGrew’s and Wood’s goals featured in the third while Noah King scored his first of the season.

Despite taking the loss, Isaac Poulter was outstanding between the pipes for the Broncos, stopping 44 of 47 shots.

Austin Pratt’s fourth goal of the season proved to be the difference in Friday’s contest between the Regina Pats and Kootenay ICE in Cranbrook, B.C. with the visiting Pats winning by a 3-2 final.

Robbie Holmes scored the lone goal of the first period and Sergei Alkhimov scored on a penalty shot 7:46 into the second before Pratt scored 12:24 into the middle period. Cameron Hausinger and Jaegar White responded for the ICE, but it wasn’t enough to earn the victory Friday.

Max Paddock stopped 29 of 31 for his first victory of the season.

It took a season-high six goals and every last second of Friday’s game, but the Calgary Hitmen have their first victory of the 2018-19 WHL Regular Season.

The Hitmen scored two goals evenly across the three periods while the Hurricanes overcame a slow start to score once in the second and four times in the third.

Hitmen captain Mark Kastelic led the way with a pair of goals and three points while Jake Kryski had a goal and two assists. Vladislav Yeryomenko (Nashville Predators) added three assists in the contest.

2019 NHL Draft prospect Logan Barlage scored twice while Jake Elmer had a goal and an assist. Rookie Noah Boyko had a pair of assists in the contest.

The Medicine Hat Tigers gave the Prince George Cougars a rough welcome to Alberta Friday night to the tune of a 4-1 victory.

Ryan Jevne scored twice while Linus Nassen (Florida Panthers) added a goal and two assists and Tyler Preziuso had a goal and one assist. Nassen scored 28 seconds into the first while Preziuso and Jevne’s first of the game came in the second. Jevne added his second of the game in the third. Josh Curtis had the Cougars’ lone goal of the game.

Mads Sogaard stopped 22 of 23 shots to out-duel Taylor Gautheir, who stopped 26 of 30 shots.

In a rematch of a hotly-contest Round One matchup from the 2018 WHL Playoffs, the Kelowna Rockets earned a small measure of revenge with a 3-2 regulation victory Friday at the Toyota Centre.

Dallon Wilton’s first career WHL goal and Libor Zabransky’s first of the season featured in the first while Isaac Johnson responded for the Americans with his third of the season. That’d be all the scoring until the third when 2019 NHL Draft prospect Kyle Topping and the first career WHL goal from Blake Stevenson featured in the period, preserving the one-goal victory for the visitors.

Roman Basran stopped 20 shots to earn the victory while Beck Warm stopped 34 of 37 shots in the narrow loss.

The Everett Silvertips added to the Edmonton Oil Kings’ bad luck south of the 49th parallel Friday, scoring a 5-3 win over the visitors from Alberta’s capital.

Captain Connor Dewar (Minnesota Wild) tallied a pair of goals as part of a four-point night while Bryce Kindopp and Jake Christiansen each had a goal and an assist. Riley Sutter (Washington Capitals) added a pair of assists while Dustin Wolf stopped 17 shots. Dawson Butt also scored for the Silvertips.

Conner McDonald, Vince Loschiavo, and Vladimir Alistrov scored for Edmonton in the loss. Boston Bilous stopped 39 of 44 shots to keep his team in the game.

Kamloops Blazers 3 at Vancouver Giants 4 — SO

After a furious comeback in the late stages of the third period, the Vancouver Giants waited until the 13th round of the shootout to secure a 4-3 win over the Kamloops Blazers.

Giants captain Jared Dmytriw scored the first goal of the game, but the Blazers responded with Zane Franklin’s sixth of the season and a pair of goals from Luc Smith to take a two-goal lead with 4:27 to go. The Giants battled back though with the second goals of the year from Davis Koch and Milos Roman (Calgary Flames), Roman’s coming with less than 11 seconds to go in the contest.