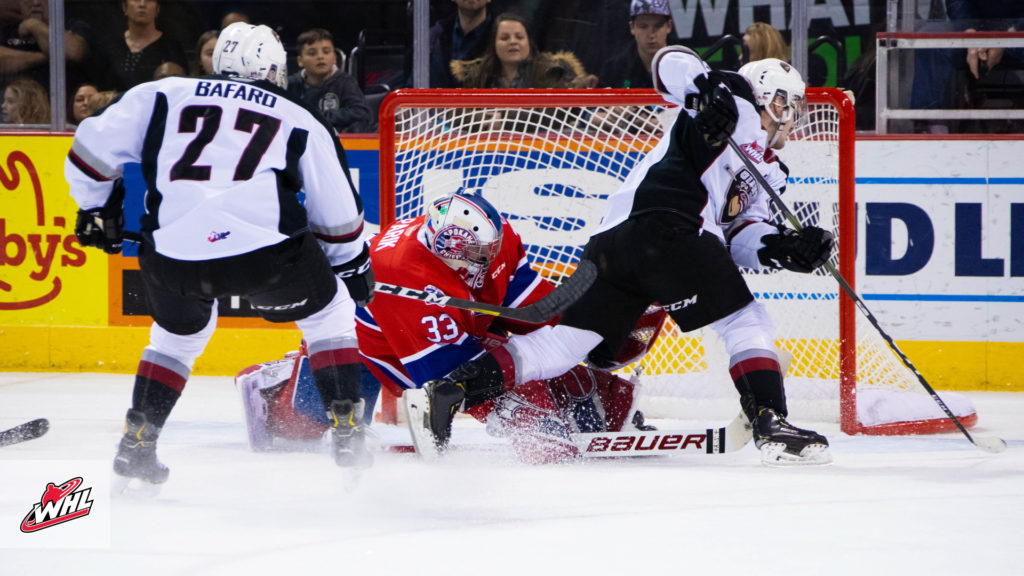 Friday’s Western Hockey League action saw eight games bring teams one game closer to the end of November with plenty of thrills to provide. In another edition of the Battle of Manitoba, Cole Reinhardt powered the Brandon Wheat Kings with a five-point performance against the Winnipeg ICE. In Moose Jaw, the Medicine Hat Tigers kept their hosts off the scoreboard while they filled the back of the net on their own terms. In the northern part of the province, the regulars contributed to another home victory for the Prince Albert Raiders. Over in Alberta, the Calgary Hitmen made their triumphant return home with a win over the Regina Pats. In southern Alberta, the Saskatoon Blades used some late-game magic to earn a shootout victory. A goaltending battle was brewing in B.C.’s interior, with the Portland Winterhawks outlasting the Kamloops Blazers. In the U.S. Division, the Victoria Royals continued their winning ways in Kennewick while the Vancouver Giants dug deep in an overtime victory against the Spokane Chiefs. 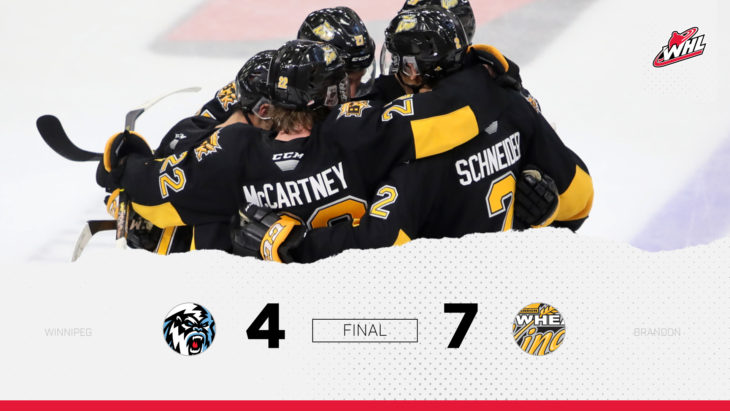 Cole Reinhardt recorded the second hat trick of his WHL career as part of a five-point night Friday as the Brandon Wheat Kings topped the Winnipeg ICE 7-4 on home ice.

Captain Connor Gutenberg, 2020 NHL Draft prospect Ridly Greig, and Marcus Sekundiak each contributed a goal and an assist in the victory.

Trailing 2-1 after 20 minutes, Brandon responded with three goals in the second and three more in the third, allowing a single goal to the ICE in each of the last two periods. Lynden McCallum had the other goal for the Wheaties in the win.

2020 NHL Draft prospect Braden Schneider and Vincent Iorio also contributed a pair of helpers each for the home side. Between the pipes, Jiri Patera (Vegas Golden Knights) stopped 36 of 40 shots to earn the victory.

Jackson Leppard and Owen Pederson each had a pair of goals for the ICE in the loss. 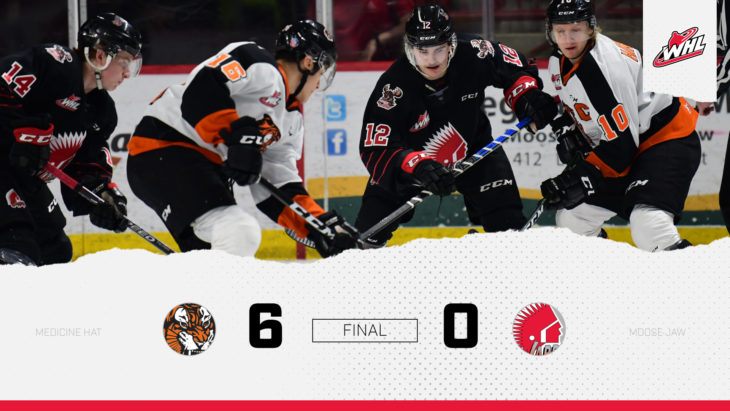 Hamblin opened the scoring in a three-goal first period with strikes from Eric Van Impe and Daniel Baker featuring as well. The Tigers struck three more times in the third as Jonathan Brinkman, Baxter Anderson, and Hamblin’s second goal of the night came in the final period.

Cole Clayton and Tyler Preziuso each added a pair of helpers in the win while Baker added an assist for the multi-point night.

Facing 51 shots, Adam Evanoff turned aside 45 in the loss. 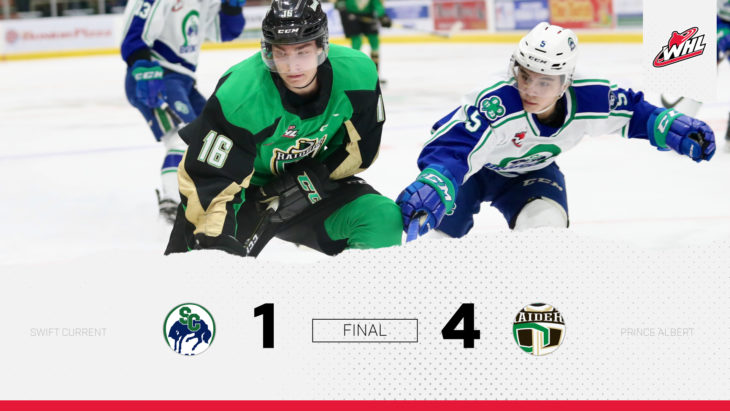 Aliaksei Protas (Washington Capitals) scored his 18th goal of the season as part of a three-point game Friday as the Prince Albert Raiders downed the Swift Current Broncos by a 4-1 final at the Art Hauser Centre.

Cole Nagy and the first goal of Raphael Pelletier’s WHL career featured in the second period to keep the teams tied through 40 minutes. In the third, Protas put the Raiders ahead for good while Spencer Moe also scored and Brayden Watts added an empty-net goal to close out the game.

Boston Bilous stopped 21 of 22 shots for the win. 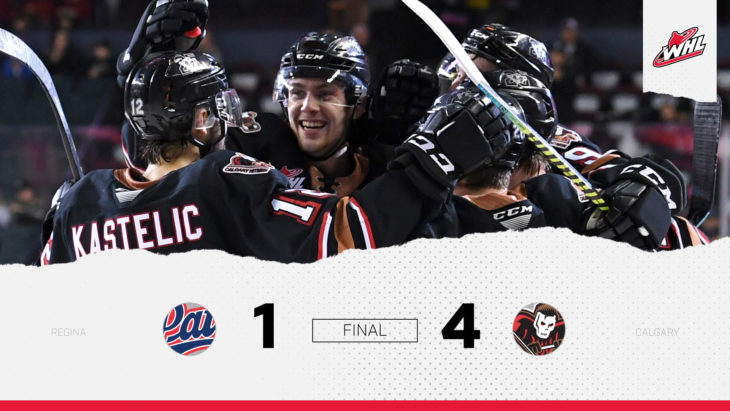 The Calgary Hitmen embraced their first home game in nearly three weeks, topping the Regina Pats by a 4-1 score.

Pats’ captain Austin Pratt had the lone goal of the first period, but the Hitmen responded in the second with goals by Hunter Campbell and Stotts’ game-winning goal.

In the third, Jonas Peterek and Carson Focht (Vancouver Giants) each found the back of the net to provide extra comfort for the Hitmen in earning the victory. Defenceman Egor Zamula (Philadelphia Flyers) contributed a pair of helpers in the win. 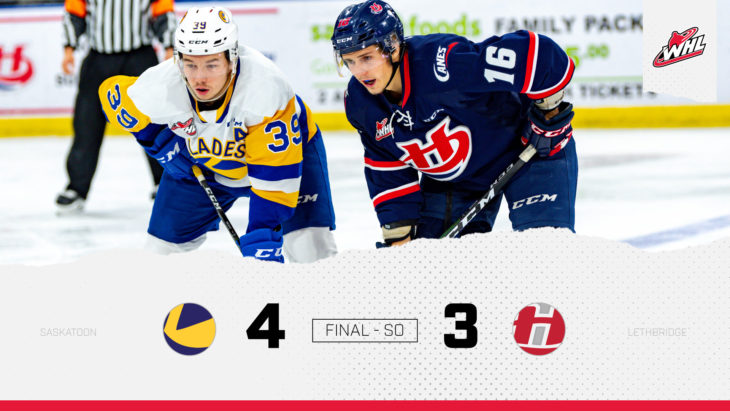 Nolan Maier stopped D-Jay Jerome in the third round of the shootout as the Saskatoon Blades clawed back to earn a 4-3 win over the Lethbridge Hurricanes Friday in southern Alberta.

It was all Hurricanes in the first as both Alex Thacker and Oliver Okuliar scored for the home side. The Blades responded in the second with goals from Eric Florchuk (Washington Capitals) and Jayden Wiens to tie up the game through 40 minutes.

Okuliar’s second of the game put the Hurricanes ahead 77 seconds into the third period, but Zach Huber struck late to push the game into overtime. With the game prolonged into the shootout, Kyle Crnkovic scored the first and only goal of all six shooters to help the Blades claim the win.

Aidan De La Gorgendiere contributed a pair of assists in the game.

In addition to not surrendering a goal on three shootout attempts, Maier stopped 40 of 43 shots through 65 minutes of action. 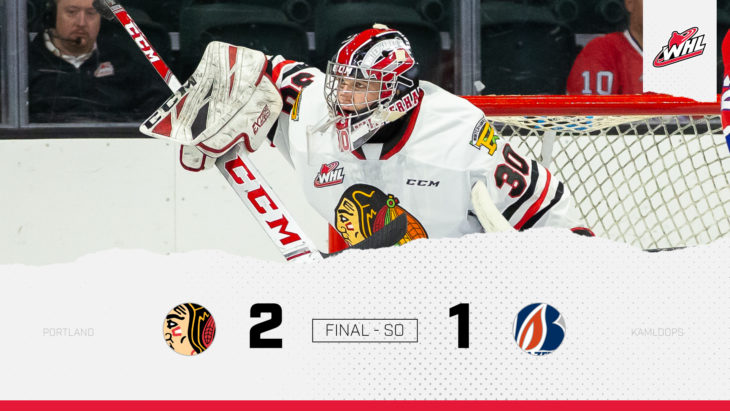 Kade Nolan and 2020 NHL Draft prospect Connor Zary had the only goals through 65 minutes of action with Hofer stopped 34 shots to Garand’s 33. Nolan’s goal came in the first while Zary’s equalizer came in the second.

In the shootout, another 2020 NHL Draft prospect Seth Jarvis was the lone player from the five shooters to score as Hofer aptly protected the crease on all three attempts by the Blazers. 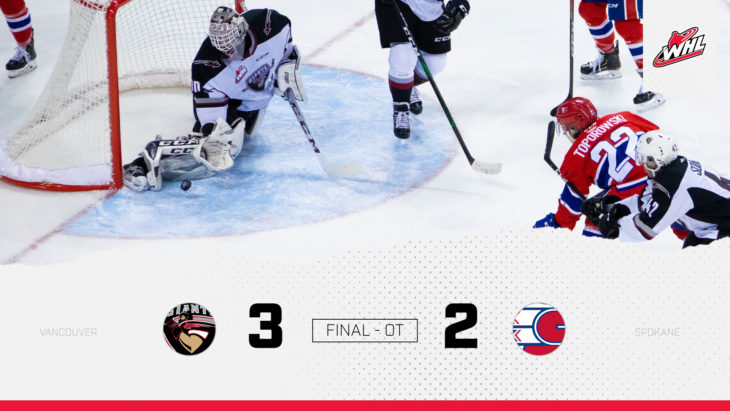 Down 2-0 after 40 minutes, the Vancouver Giants came all the way back to earn a 3-2 victory in overtime Friday against the Spokane Chiefs.

Goals from Adam Beckman (Minnesota Wild) and Erik Atchison had the home side up by a pair through 20 minutes and Lukáš Pařík (Los Angeles Kings) was stellar between the pipes to extend that lead through 40.

The comeback began 3:47 into the third period as 2020 NHL Draft prospect Justin Sourdif notched his 11th of the season. Near the midway mark of the period, Milos Roman (Calgary Flames) tied up the contest.

That set the stage for Tristen Nielsen’s game-winning goal on a breakaway 3:41 into the extra period.

After allowing two goals on 11 shots in the opening 20 minutes, David Tendeck (Arizona Coyotes) stopped all 11 shots sent his way through the rest of regulation and overtime to hold the fort for the Giants. 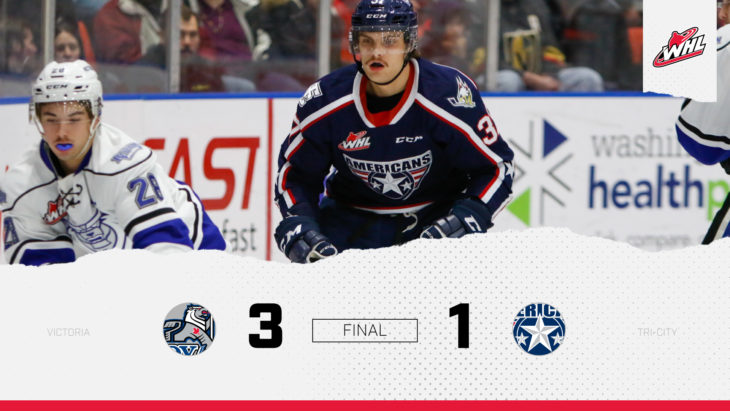 The Victoria Royals scored twice in the third period Friday night to secure a 3-1 win over the Tri-City Americans.

Shane Farkas led the way defensively with a 30-save performance to hold the Americans to just a single goal in the contest.

Offensively, Gary Haden opened the scoring in the first. Edge Lambert tied up the game early in the third, but the Royals followed it up with the game-winning goal by Graeme Bryks and an empty-net goal by Will Warm.