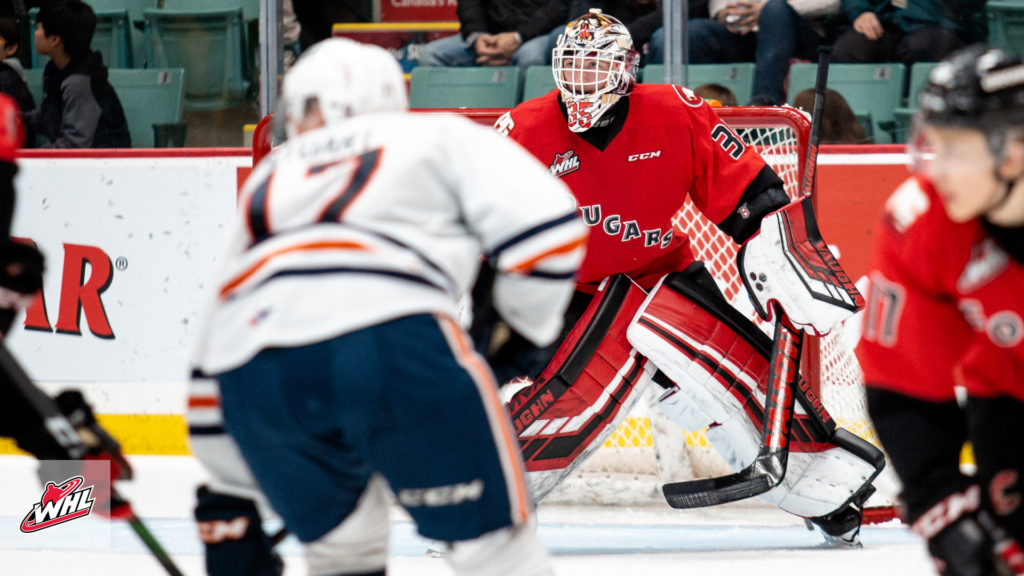 A 10-game schedule of action in the Western Hockey League saw plenty of action. All four division leaders entering the night went down to defeat on the road. From the Eastern Conference, the Medicine Hat Tigers beat the Prince Albert Raiders while the Edmonton Oil Kings lost in overtime to the Vancouver Giants. In the Western Conference, the Portland Winterhawks downed the Everett Silvertips while the Prince George Cougars completed a weekend sweep of the Kamloops Blazers. The losses opened doors for two new teams to take over division leads this evening as the Winterhawks took over top spot in the U.S. Division while the Lethbridge Hurricanes overtook the Oil Kings after a thrashing of the Red Deer Rebels. In other WHL action, the Regina Pats, Calgary Hitmen, Kelowna Rockets, Spokane Chiefs, and Seattle Thunderbirds also earned victories Saturday. 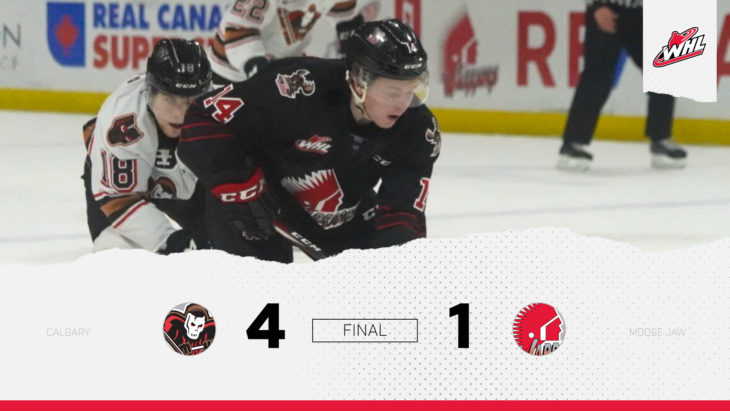 Jett Woo (Vancouver Canucks) had a goal and an assist against his former team Saturday as the Calgary Hitmen downed the Moose Jaw Warriors 4-1.

Woo picked up his helper on the opening goal of the game as Jonas Peterek sniped home his sixth of the season. In the second, goals from Orca Wiesblatt and captain Mark Kastelic (Ottawa Senators) bookended a goal by Cole Jordan to make the score 3-1 after 40 minutes.

In the third, Woo scored his third of the season. Brayden Peters stopped 17 of 18 shots for the victory. 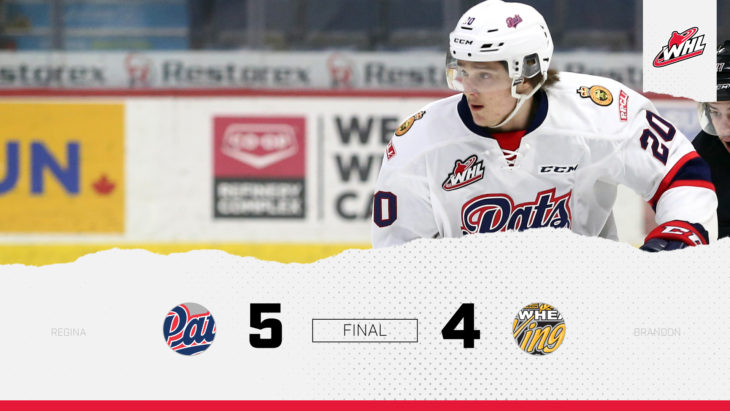 The Regina Pats made it back-to-back road wins with a 5-4 decision against the Brandon Wheat Kings Saturday.

Robbie Holmes and Carter Chorney each had a goal and an assist while Kyle Walker’s second goal of the season stood up as the game-winning goal. Riley Krane and Carson Denomie also scored for the Pats in the victory.

In his first start with the Pats, Donovan Buskey stopped 27 of 31 shots for the victory. 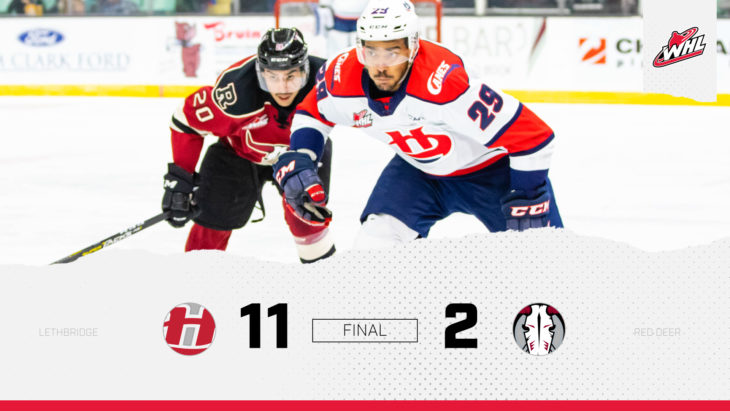 The visitors scored five times in the first, followed by three-goal performances in each of the second and third periods.

D-Jay Jerome scored twice while Dylan Cozens (Buffalo Sabres) scored his 17th of the season as part of a five-point night. Logan Barlage and 2020 NHL Draft prospect Noah Boyko each finished with a goal and three points.

Justin Hall, Trevor Thurston, and Koletrane Wilson each had a goal and an assist as well. Ethan Sakowich and Cameron Hausinger scored for Red Deer in the loss.

Despite the lopsided score, 2020 NHL Draft prospect Bryan Thomson had to be sharp for 60 minutes, stopping 26 of 28 shots. 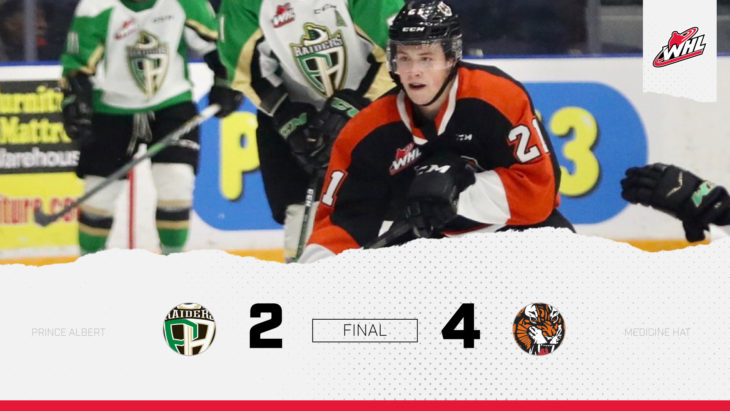 The Medicine Hat Tigers denied the Prince Albert Raiders a sweep of their three-game Albertan road trip Saturday, doubling up the defending WHL Champions by a 4-2 score.

Cole Sillinger and Jonathan Brinkman struck 34 seconds apart in the opening period as the Tigers made it a 2-0 game early. The Raiders responded in the second with goals from Remy Aquilon and Spencer Moe in a span of 77 seconds.

The game would be decided in the third as Brett Kemp and Corson Hopwo found the back of the net for the home side, earning the pair of points for the Tigers. 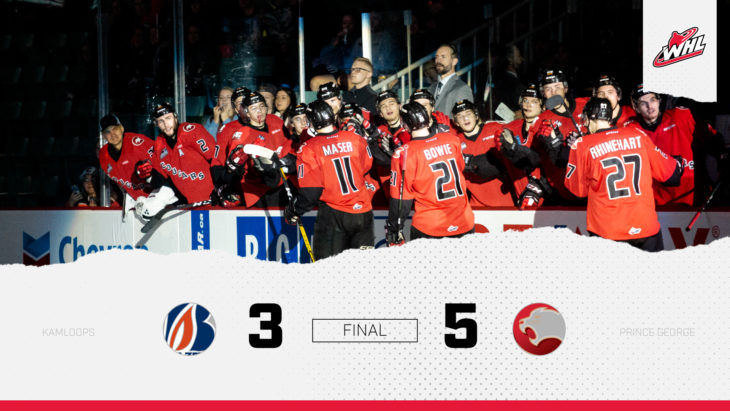 The Prince George Cougars completed a weekend sweep of the Kamloops Blazers Sunday, earning a 5-3 win Saturday at the CN Centre.

Pelted with 51 shots by the division-leading Blazers, Taylor Gauthier stood tall with a season-high 48 saves to earn the victory.

Offensively, captain Josh Maser and Mitchell Kohner each had a goal and an assist. Vladislav Mikhalchuk, Ethan Browne, and Tyson Upper also scored for the Cougars. Prince George scored twice in each of the first and third periods, adding a single goal in the second. 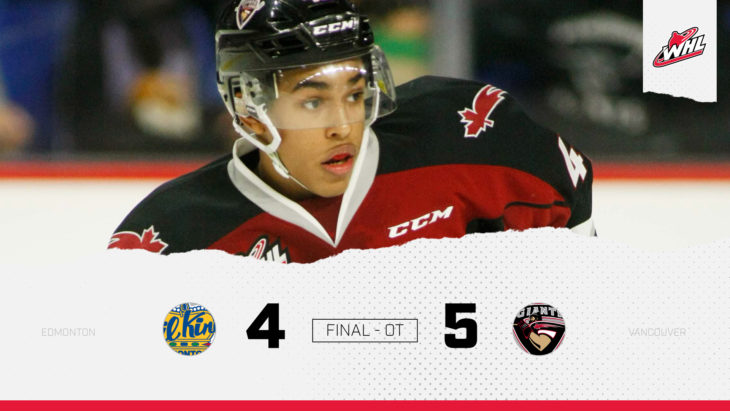 Just 87 seconds after Robertson’s tying goal in the third, Nielsen put the Giants ahead with his second of the game, but Josh Williams responded later in the period to force extra time.

Trent Miner (Colorado Avalanche) stopped 32 of 36 shots for the win. 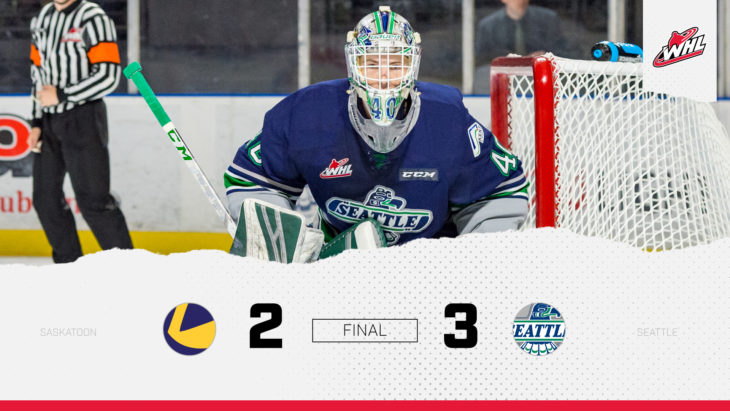 The Seattle Thunderbirds scored twice in the first period, then held off the Saskatoon Blades for a 3-2 win on home ice.

Keltie Jeri-Leon scored 25 seconds into the game to put Seattle ahead early and 2020 NHL Draft prospect Simon Kubicek found the back of the net later in the period to double that lead.

After Nolan Kneen and Payton Mount traded goals in the second, Matéj Toman scored the only goal of the third to bring the Blades within a goal, though they couldn’t find the equalizer.

Captain Matthew Wedman (Florida Panthers) and forward Conner Bruggen-Cate each had a pair of assists in the win.

Blake Lyda protected the crease with 35 saves on 37 shots for the first win of his WHL career. 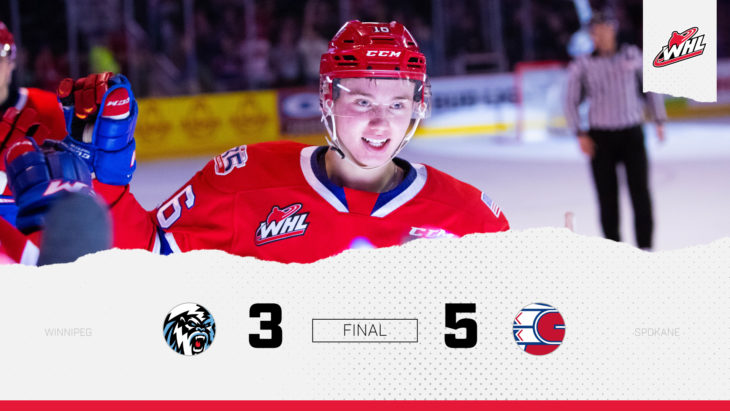 A three-goal third period propelled the Spokane Chiefs into the win column Saturday with a 5-3 result over the Winnipeg ICE.

It was the visitors rolling early though as 2020 NHL Draft prospect Connor McClennon and defenceman Reece Harsch struck for goals. Noah King and Cordel Larson would tie up the game in the middle period before Jakin Smallwood put the ICE ahead 3-2 after 40 minutes.

The Chiefs began to gain steam midway through the third with a short-handed goal from Adam Beckman (Minnesota Wild) and the game-winning goal by Eli Zummack. Larson put his second of the game into the empty net to secure the win late. 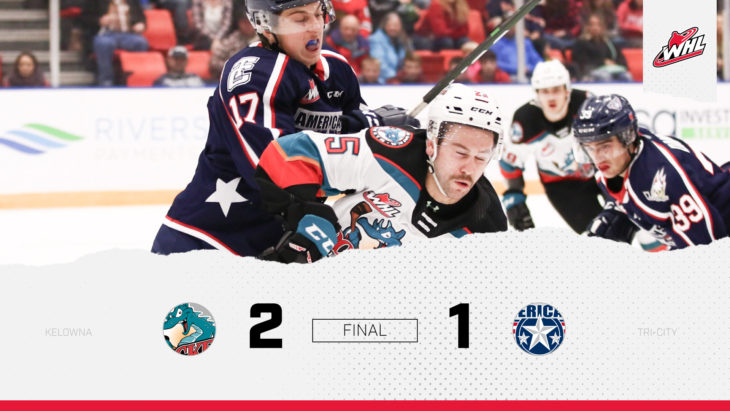 Leif Mattson scored twice as the Kelowna Rockets doubled up the Tri-City Americans by a 2-1 score Saturday south of the 49th parallel.

A short-handed goal from Krystof Hrabik opened the scoring in favour of the Americans, but Mattson tied it up on the power play 33 seconds later and scored early in the third for the game-winning goal.

Roman Basran stopped 24 of 25 shots to earn the victory. 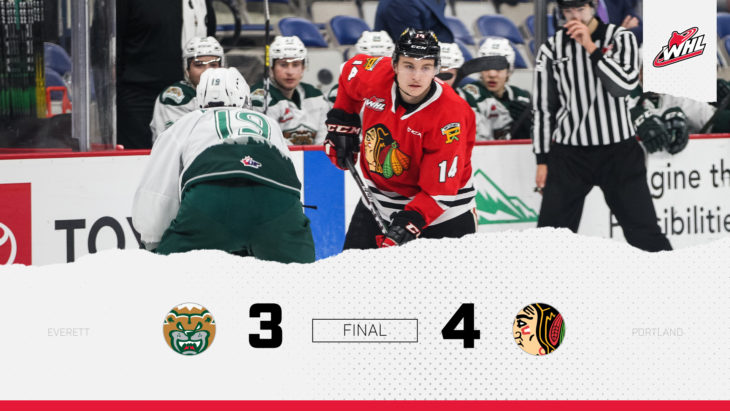 The Portland Winterhawks earned another regulation win in a matchup of the top two teams in the U.S. Division, downing the Everett Silvertips by a 4-3 score Saturday.

Goals from Jake Gricius and Tyson Kozak put Portland up by two after 20 minutes. Gage Goncalves got the Silvertips on the board in the second, but Lane Gilliss answered back to keep the difference at two through 40 minutes. A goal by 2020 NHL Draft prospect Seth Jarvis came at the right time in the third as the Silvertips mounted a comeback effort late with goals by Goncalves and captain Bryce Kindopp to pull themselves within a goal.