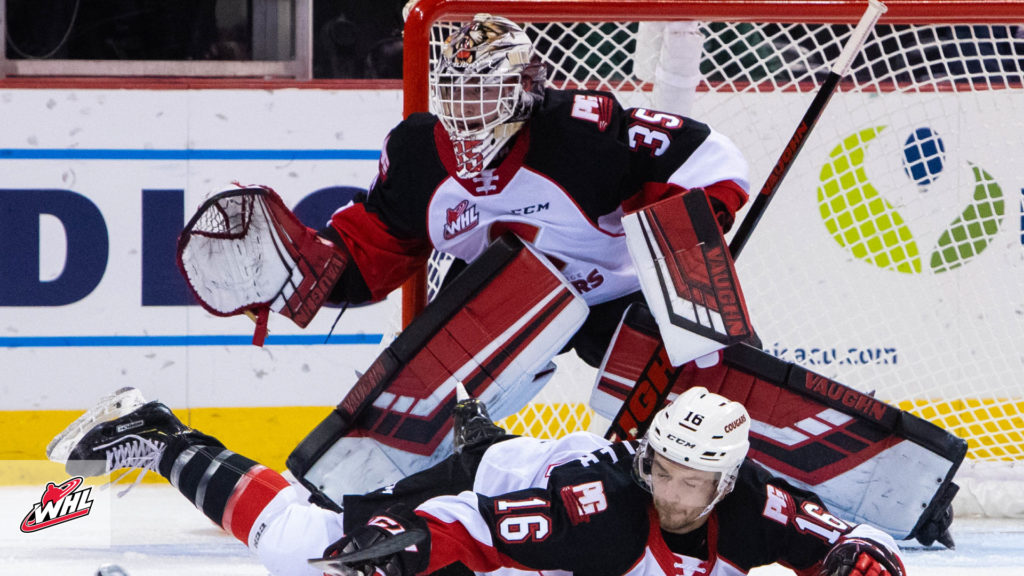 The Prince George Cougars beat the Spokane Chiefs for the first time since March 2017 to lead Friday’s Western Hockey League action on a nine-game schedule. Sharp goaltending guided the Cougars, Portland Winterhawks, Saskatoon Blades, Vancouver Giants, and Kamloops Blazers to the win column. On the offensive side of the game, the Kelowna Rockets rolled to an eight-goal performance while the Medicine Hat Tigers reached the five-goal mark for the fourth time this season. In northern Saskatchewan, the Prince Albert Raiders scored another late goal to remain undefeated in regulation. In Kennewick, the Tri-City Americans were pressed into overtime to earn their extra point against the Victoria Royals. 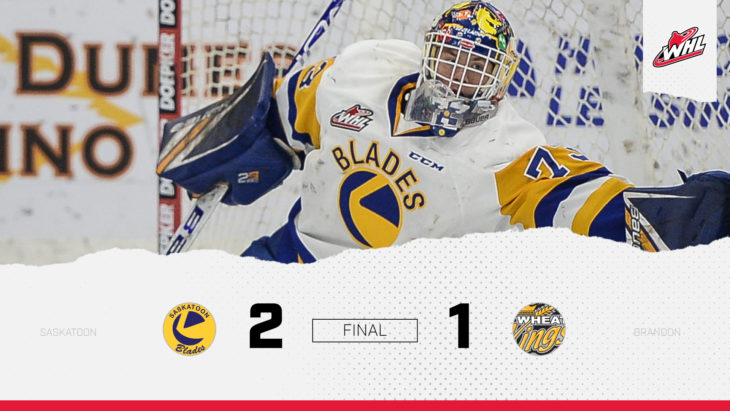 Saskatoon Blades captain Chase Wouters scored a short-handed goal early in the third period Friday as the Saskatoon Blades earned a 2-1 win against the Brandon Wheat Kings. Cole Reinhardt opened the scoring with his first of the season, but Eric Florchuk (Washington Capitals) responded minutes later to tie up the game after 20 minutes.

Brandonite Tristen Robins and Swan River’s Riley McKay had the lone assists for the Blades. Nolan Maier had another impressive night, stopping 36 of 37 shots. 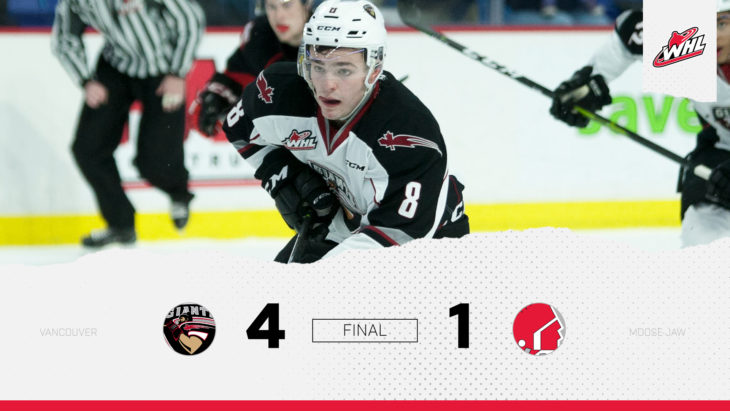 Tristen Nielsen had a pair of goals and an assist as the Vancouver Giants rolled to a 4-1 victory over the Moose Jaw Warriors Friday. Owen Hardy opened the scoring against his former team, but the Giants reeled off four-unanswered goals. 2020 NHL Draft prospects Justin Sourdif and Lukas Svejkovsky had the other goals in the victory. David Tendeck (Arizona Coyotes) stopped 24 of 25 shots to earn the win. Sourdif added an assist for the multi-point game.

In his return to the WHL, Brayden Tracey (Anaheim Ducks) had an assist on Moose Jaw’s lone goal. 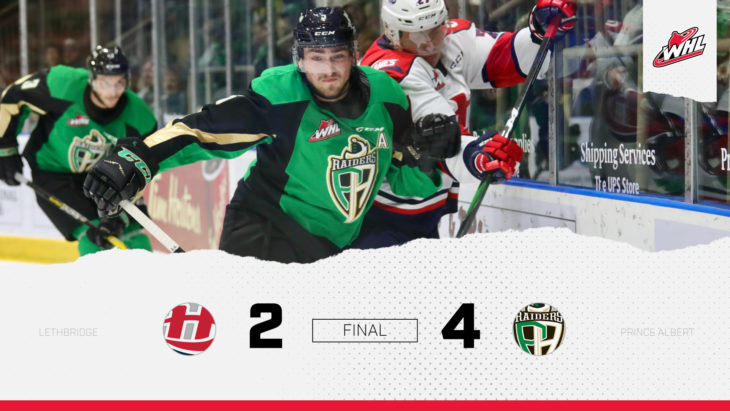 Another late goal pushed the Prince Albert Raiders to two points on home ice Friday in a 4-2 victory over the Lethbridge Hurricanes. The Raiders opened the scoring on Spencer Moe’s first goal of the season, but Ty Nash potted the first goal of his WHL career to even up the game after 20 minutes. Zack Hayes gave the Raiders a 2-1 lead after 40 minutes, but Koletrane Wilson responded with 5:39 left in regulation to tie up the score. 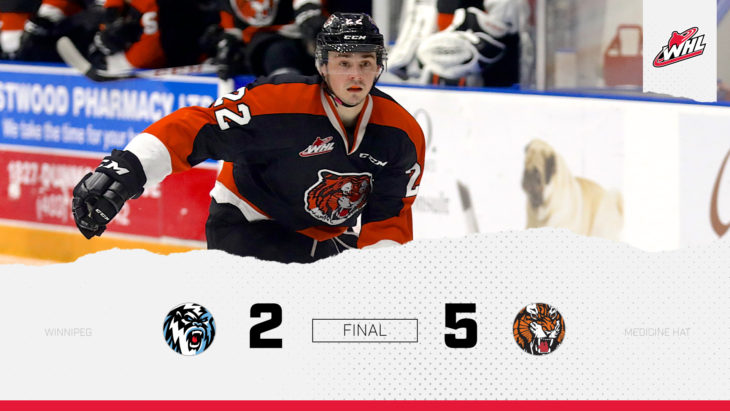 The Medicine Hat Tigers never trailed Friday, downing the visiting Winnipeg ICE by a 5-2 final. Tyler Preziuso scored a pair of goals while Elijah Brown, Ryan Chyzowksi, and Cole Sillinger also found the back of the net. 2020 NHL Draft prospect Garin Bjorklund pushed his record on the season to 3-0-0-0 with a 29-save performance.

Captain James Hamblin, Brett Kemp, and Cole Clayton each had a pair of assists. Jakin Smallwood and 2020 NHL Draft prospect Connor McClennon scored for Winnipeg in the loss. 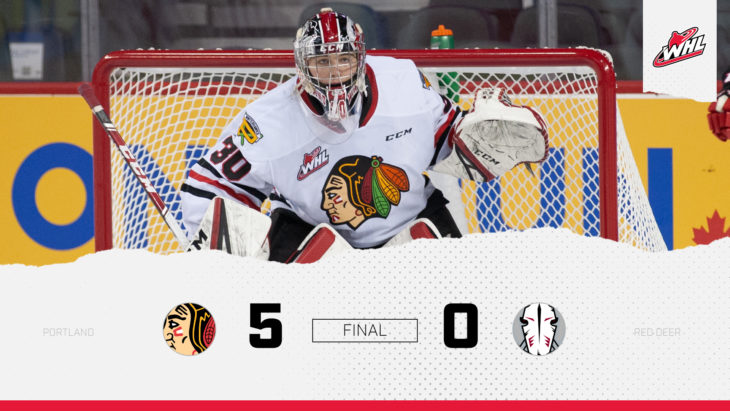 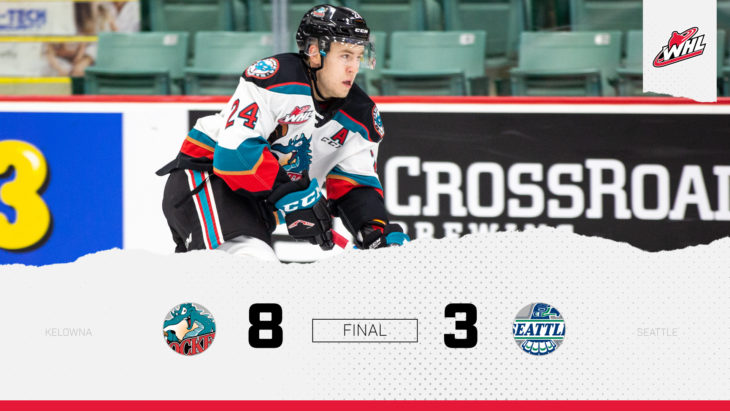 The Kelowna Rockets turned off the offensive jets to earn their second road win of the season in an 8-3 result over the Seattle Thunderbirds Friday. Nolan Foote (Tampa Bay Lightning) led the way with a pair of goals while Kyle Topping chipped in four assists. Rookie import and 2020 NHL Draft prospect Pavel Novak added a goal and three points as seven different Rockets scored in the win. 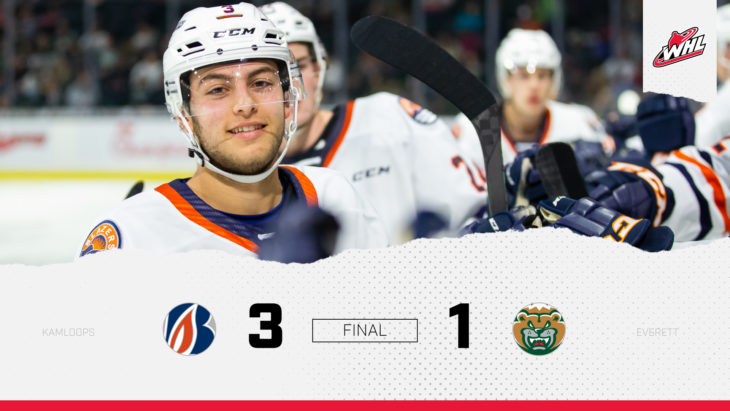 The Kamloops Blazers gave up the first goal, but responded with three of their own and shut things down from there Friday in a road win against the Everett Silvertips. Brendan Lee scored his third goal in as many games to begin the contest, giving the home side a 1-0 lead after 20 minutes.

The Blazers would receive a pair of goals from the blue line in the second as Inaki Baragano notched the first goal of his WHL career. Quinn Schmiemann (Tampa Bay Lightning) followed suit seven minutes later with his first of the season. 2020 NHL Draft prospect Connor Zary added an insurance goal in the third. Dylan Garand stopped 33 shots for the victory. 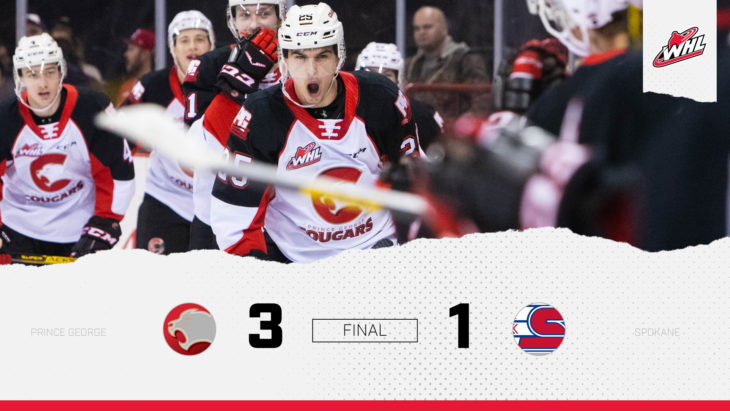 The Prince George Cougars earned their first win in Spokane since March 11, 2017 Friday, scoring a 3-1 win against the Chiefs. Goals from Connor Bowie and Mitchell Kohner provided the difference in the second period while Taylor Gauthier stopped 44 of 45 shots for the win. Josh Maser’s third goal of the season opened the scoring in the first while Bobby Russell’s first of the season accounted for the lone Spokane goal. 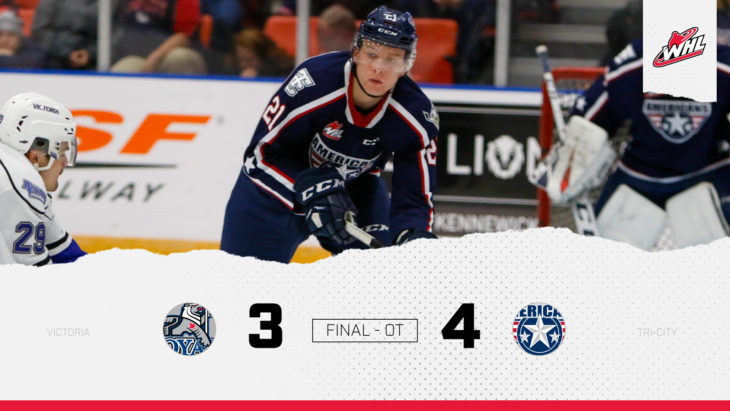 Captain Kyle Olson scored his second goal of the game with 40 seconds left in overtime as the Tri-City Americans pulled out a 4-3 victory against the Victoria Royals Friday. River Fahey had the only goal of the first to give the Royals a 1-0 lead after 20 minutes, but the Americans responded with goals from Tom Cadieux and Olson’s first of the night. Tarun Fizer would answer with his third of the season to keep the score level at 2-2 after 40 minutes.

Samuel Huo and Matthew Smith traded goals midway through the third, setting the stage for Olson’s game-winning goal in the extra frame. Beck Warm stopped 27 of 30 shots for the victory.