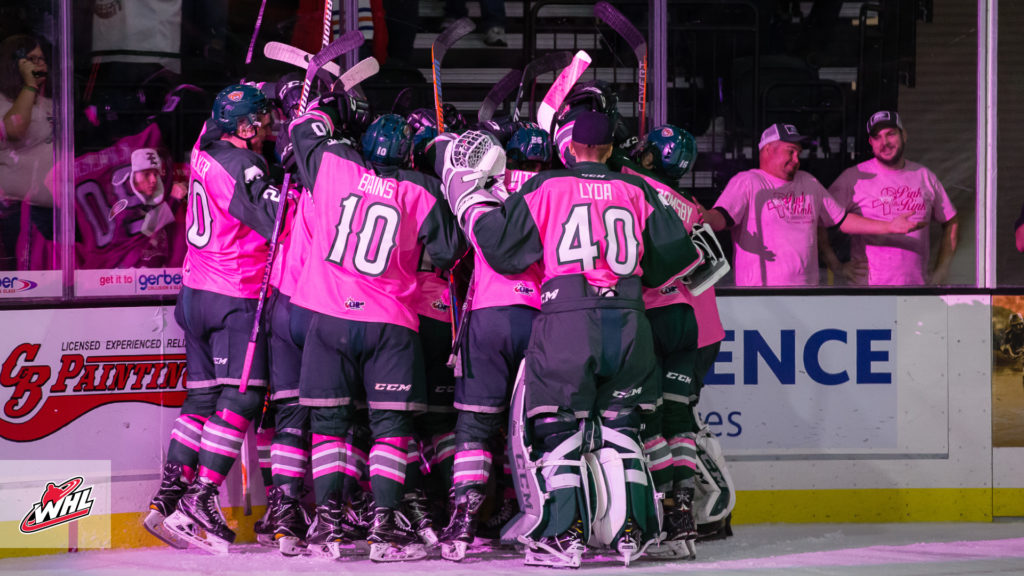 1. Dorrin Luding, Saskatoon Blades: Making his first start of the season, the Saskatoon Blades goaltender was an impenetrable wall, stopping all 42 shots sent his way in 3-0 blanking of the Calgary Hitmen. Luding stopped nine shots in the first, 15 in the second, and 18 in the third as the Blades improved to 2-1 on their road trip through Alberta. The shutout was the second of Luding’s WHL career.

2. Josh Brook, Moose Jaw Warriors: The Montreal Canadiens defensive prospect and Moose Jaw Warriors captain put an end to the perfect season of the Brandon Wheat Kings Friday, scoring the overtime goal after adding a pair of assists in regulation.

Brook earned a secondary assist on the Warriors’ opening goal, then drew a primary assist on his team’s second goal of the contest before winning the game 14 seconds into the extra period. Brook now has seven points (3G-4A) in four games as the Warriors now sit at 2-2-1-0.

3. Joachim Blichfeld, Portland Winterhawks: The San Jose Sharks prospect tallied a power-play goal, a short-handed goal, and a primary assist on the game-winning goal as the Winterhawks won for the second time in three nights against the Kamloops Blazers.

Blichfeld buried Portland’s second and third goals in the games, with the later of the two coming 18 seconds into the third period to help spark a comeback after falling behind 3-2 after 40 minutes. Blichfeld now has 13 points (6G-7A) in six games since his return to the Winterhawks, with his last four games featuring multi-point performances. 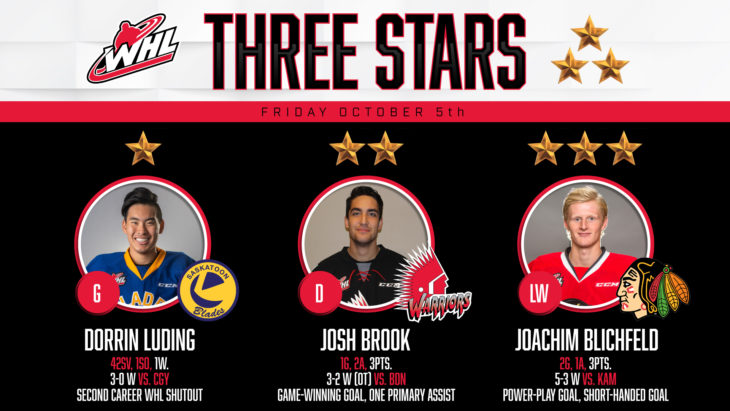 -For two teams starved for their first win of the season, an 11-goal explosion resulted as the Regina Pats downed the Swift Current Broncos by a 6-5 score Friday. Captain Jake Leschyshyn (Vegas Golden Knights) and Austin Pratt each scored twice, with Leschyshyn’s second goal of the game standing up as the difference in the contest. Alec Zawatsky scored twice for the Broncos in the loss.

Pratt added an assist for the three-point game while Nick Henry (Colorado Avalanche) and defenceman Aaron Hyman each had three assists in the contest. Eric Houk scored his first career WHL goal for the Broncos in the game.

Brodan Slamond stopped 20 of 22 shots to earn the victory while Jiri Patera (Vegas Golden Knights) stopped 27 of 30 in the narrow loss.

-The Saskatoon Blades trip through Alberta continued to improve as they shutout the Calgary Hitmen by a 3-0 score Friday. 2019 NHL Draft prospect Kirby Dach scored the game-winning goal in the first while Michael Farren and Logan Christensen added goals in the second period.

Making his first start of the season, Dorrin Luding stopped all 42 shots sent his way for his second career WHL shutout. Kaden Elder let the Hitmen with six shots in the game.

-A back-and-forth game between the Kootenay ICE and the Edmonton Oil Kings led to a shootout where the ICE emerged victorious by a 5-4 final. A well-rounded effort from both teams earned goals for Brendan Semchuk, Martin Bodak, Cameron Hausinger and Jaegar White goals for from the ICE. Brett Kemp, Conner McDonald, Andrei Pavlenko, and Quinn Benjafield tallied goals for the Oil Kings. With a 4-4 finish at the end of regulation, the teams headed to overtime. After a scoreless five minutes, the two teams went through three rounds of shootout attempts, resulting in 2019 NHL Draft prospect Peyton Krebs netting the shootout winner for the ICE.

-The Prince Albert Raiders continued their hot streak with a 5-1 win over the Lethbridge Hurricanes. Although Taylor Ross struck early in the first period, the Raiders’ offence dominated the remainder of the game. Import defenceman Sergei Sapego evened the score for the Raiders in the second period, but Noah Gregor (San Jose Sharks) was quick to score one of two short-handed goals to put the Riders in the lead. Cole Fonstad (Montreal Canadiens) chipped in with two nifty back-to-back goals for the Raiders and Gregor added a second short-handed goal into the empty net that sealed the deal for the Raiders late. Ian Scott (Toronto Maple Leafs) was also instrumental in Prince Albert’s success tonight, stopping 35 of 36 shots.

-Although the first two periods were quiet from a scoring standpoint between the Vancouver Giants and Prince George Cougars in the CN Centre, the third period quickly heated up. Owen Hardy, Justin Sourdif, and Lukas Svejkovsky scored three goals for the Giants in less than seven minutes to secure Friday’s victory to open a two-game set. David Tendeck (Arizona Coyotes) stood strong against the Cougars, earning his first shutout of the season as well as first star honours in the game.

-The Victoria Royals remained the only perfect team in the WHL’s Western Conference Friday, securing a 4-3 win over the Kelowna Rockets. Dante Hannoun opened the game one minute into the first, breezing past the Rockets’ defence to put the Royals up 1-0. A back-door feed from Brandon Cutler to Kaid Oliver on a power play improved the Royals’ advantage to 2-0 over the Rockets. However, Kelowna was quick to respond less than ten seconds later with their first goal by Liam Kindree. After Hannoun scored his second of the night and D-Jay Jerome added another, the Royals were up 4-1 on the Rockets. With a strong offensive push from the Rockets in the third period, Lassi Thomson and Leif Mattson made a game of it with two snipes in quick succession. A nail-biter to the end, the Royals were able to fend off the home team.

-For the second time in three nights, the Portland Winterhawks used their offence to score a win against the Kamloops Blazers, winning 5-3 Friday at the Sandman Centre. Joachim Blichfeld (San Jose Sharks) scored twice and added an assist for the three-point game while Jake Gricius notched the game-winning goal 96 seconds into the third period.

The Blazers received a pair of goals from Zane Franklin, taking a 3-2 lead after 40 minutes, but the Winterhawks responded with the two early goals in the third and an empty-net goal to close out the contest. Shane Farkas stopped 22 of 25 shots for the victory.

-The Medicine Hat Tigers were forced to play extra time against the Spokane Chiefs, but ended up with the 3-2 victory in the shootout. 2019 NHL Draft prospect Ryan Chyzowski and Ethan McIndoe traded goals in the first period while Bryan Locker put the Tigers ahead in the second period. That’s how things would stand until the Chiefs had their goalie pulled with 1:05 left in the third, Riley Woods converting to score the game-tying goal.

The extra effort would only result in a single point though as Mads Sogaard denied all three Spokane shooters, adding onto his 39 saves from regulation and overtime, while 2019 NHL Draft prospect Josh Williams was the lone Tigers shooter to score.

-Captain Connor Dewar (Minnesota Wild) completed a give-and-go with Bryce Kindopp 17 seconds into overtime to help the Everett Silvertips earn a 2-1 win over the Seattle Thunderbirds Friday at home. Kindopp broke the game out of a 0-0 deadlock 10:45 into the third period, but 2019 NHL Draft prospect Dillon Hamaliuk scored with 57 seconds left to tie up the game. Dewar drew a primary on Kindopp’s goal for the multi-point game while Riley Sutter (Washington Capitals) had the other assist.

Noah Philp and Jake Lee had the assists for the Thunderbirds. The Silvertips peppered Thunderbirds’ rookie Cole Schwebius with 41 shots, 39 that he stopped. 2019 NHL Draft prospect Dustin Wolf stopped 16 of 17 shots from the Thunderbirds.