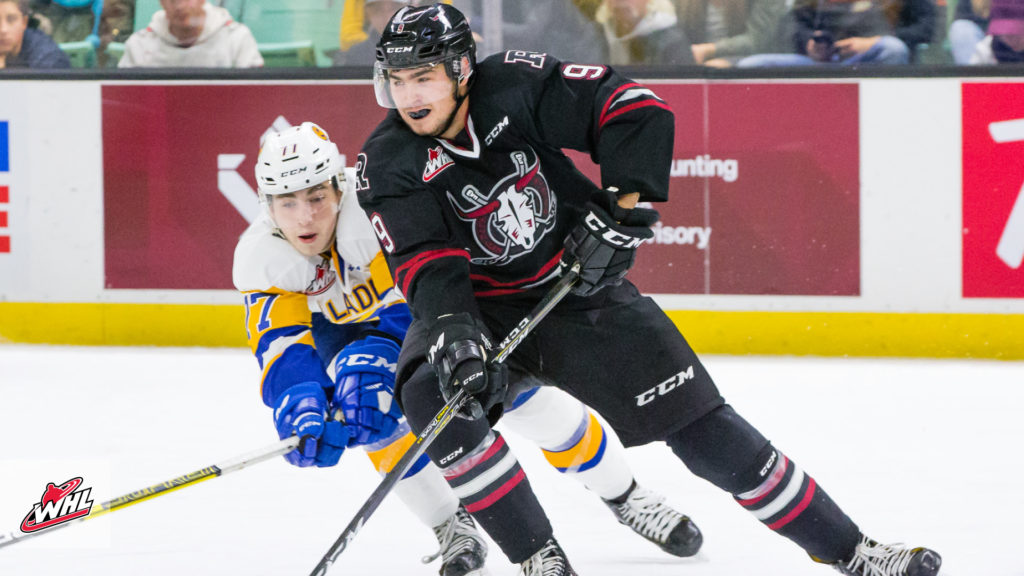 1. Jeff de Wit, Red Deer Rebels: Red Deer, Alta. product Jeff de Wit picked up his second-straight multi-goal game as the Rebels downed the Blades Tuesday in front of a home crowd. De Wit scored Red Deer’s second and third goals to help spark the team’s turnaround from the late stages of the first into the second period. The 20-year-old forward is presently in a four-way tie for second place among goal scorers in the WHL with five goals.

2. Brandon Hagel, Red Deer Rebels: Brandon Hagel continued his strong start to the season with a trio of assists for his fourth-straight multi-point performance as the Rebels also won their fourth-straight game. The Morinville, Alta. product picked up primary assists on Red Deer’s second, third, and fifth goals of the game. Hagel now has 13 points (3G-10A) in six games to begin the season.

3. Kirby Dach, Saskatoon Blades: 2019 NHL Draft prospect Kirby Dach picked up third star honours for the evening, recording his third multi-point game of the season. Dach drew secondary assists on both of the Blades first two goals. Dach now has nine points (3G-6A) in in five games this season, placing him in a tie fourth in league scoring. 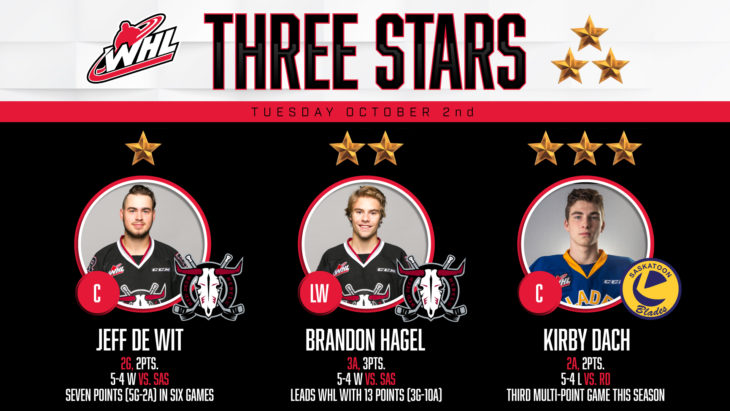 Even with just a single game on the schedule Tuesday, the Saskatoon Blades and Red Deer Rebels provided an action-packed contest resulting in a thrilling 5-4 win for the Red Deer Rebels.

The first 20 minutes was wild in itself with five goals scored as the visiting Blades took a 3-2 lead. Eric Florchuk (Washington Capitals) and Josh Paterson put the Blades on the board 4:48 and 10:55 into the opening period. Just 46 seconds later though, Chris Douglas got the Rebels on the board with his first of the season. Jeff de Wit’s first of the game came 14:09 into the opening period to tie up the game.

The scoring continued 75 seconds after de Wit’s goal as Kristian Roykas Marthinsen (Washington Capitals) struck for his second of the season, giving the Blades the lead heading into the first intermission.

Down a goal entering the second, the Rebels quickly went to work to erase that deficit. First, de Wit’s second of the season came 83 seconds into the middle period, followed 122 seconds later by Reese Johnson’s third of the season. With three power-play goals on five opportunities already in the contest, import forward Oleg Zaytsev struck with five seconds left in a man advantage to give the Rebels a two-goal advantage after 40 minutes.

Riley McKay tallied the first unassisted goal of the evening 5:09 into the third, picking off an attempt by the Rebels to clear the puck out of the zone, waltzing around a defender and beating Ethan Anders to bring the visiting side within a goal. That’s as close as the Blades would come though, despite a frantic push in the final few minutes.

In a battle of goaltenders featured on the NHL Central Scouting ‘Players to Watch’ list, Ethan Anders stopped 29 of 33 shots to earn the victory. Nolan Maier stopped 30 of 35 in the loss.