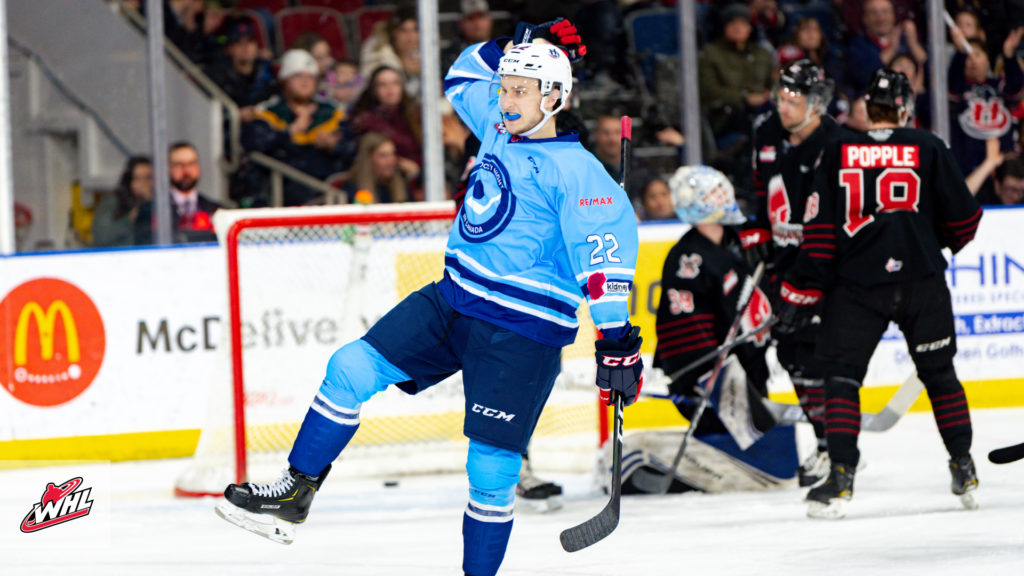 A nine-game schedule of action across the Western Hockey League saw a pair of teams lock up berths in the 2020 WHL Playoffs Friday. The Brandon Wheat Kings won a battle of royalty against the Edmonton Oil Kings. In Saskatchewan, the Saskatoon Blades doubled up the Regina Pats and the Spokane Chiefs took a convincing win against the Swift Current Broncos. One province over, the Medicine Hat Tigers doubled up the Tri-City Americans while the Lethbridge Hurricanes erupted for eight goals against the Moose Jaw Warriors in the southern part of Alberta. Over in British Columbia, the Vancouver Giants had a comeback for the ages against the Calgary Hitmen to extend their winning streak to 11 games while the Kelowna Rockets edged the Victoria Royals on Vancouver Island. In the U.S. Division, the Portland Winterhawks and Everett Silvertips picked up victories Friday. 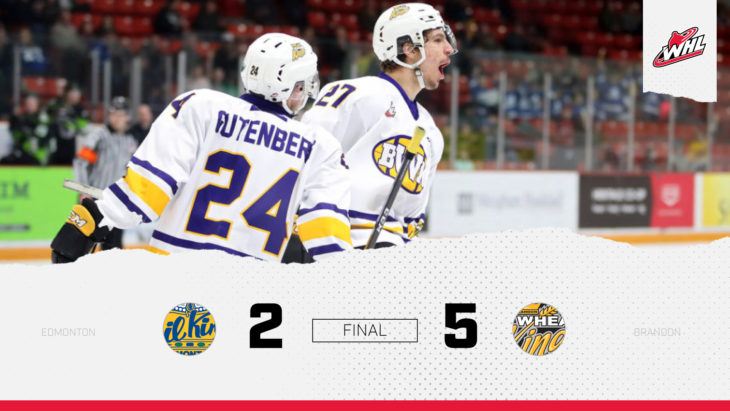 Captain Connor Gutenberg scored twice as part of a three-point night as the Brandon Wheat Kings took down the Edmonton Oil Kings by a 5-2 score.

Luka Burzan (Colorado Avalanche) and Vincent Iorio scored in the first while Ethan McIndoe got the Oil Kings on the board through 20 minutes. 2020 NHL Draft prospect Ben McCartney and Gutenberg’s first of the game featured in the second to build a 4-1 advantage.

Gutenberg added his second of the night 77 seconds into the third period. Josh Williams scored late in the final period to round out the scoring. 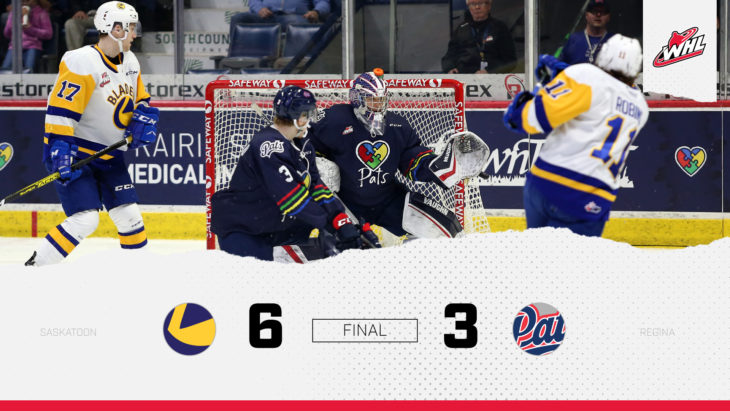 Six different skaters scored for the Saskatoon Blades Friday as they doubled up the Regina Pats 6-3.

2020 NHL Draft prospect Tristen Robins, Aidan De La Gorgendiere, and Riley McKay each posted a goal and an assist in the contest.

Robins and captain Chase Wouters had the goals for the Blades through 20 minutes while Logan Nijhoff scored for the Pats. A wild three-minute span in the second saw Caiden Daley score before the Pats tied it up on goals by Zack Smith and captain Austin Pratt. However, McKay would score late in the frame to make it a 4-3 game heading to the third.

Alex Morozoff and De La Gorgendiere added goals late in the third to round out the scoring. Nolan Maier made 24 saves for the win.

Kyle Crnkovic and Scott Walford each picked up a pair of assists in the win. 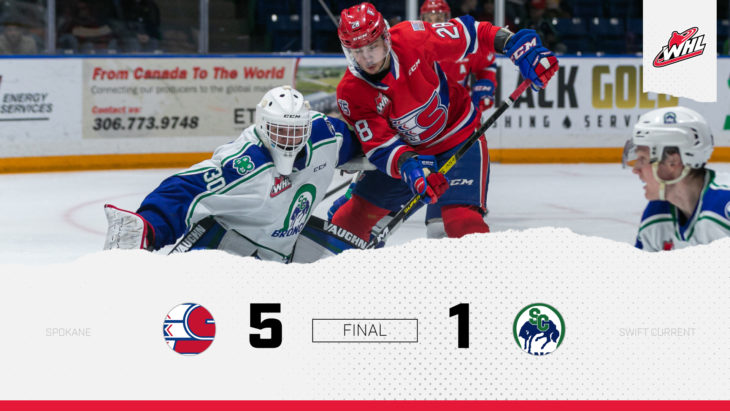 A three-goal second period lifted the Spokane Chiefs to a 5-1 victory against the Swift Current Broncos in Saskatchewan Friday.

Luke Toporowski and Hayden Ostir traded goals through 20 minutes to keep the teams tied. In an 8:33 span of gameplay during the second, Adam Beckman (Minnesota Wild), Michael King, and captain Ty Smith (New Jersey Devils) scored for the visitors.

Swift Current product Reed Jacobson scored for Spokane in the third to close out the win. Lukáš Pařík (Los Angeles Kings) made 31 saves on 32 shots to collect the win. 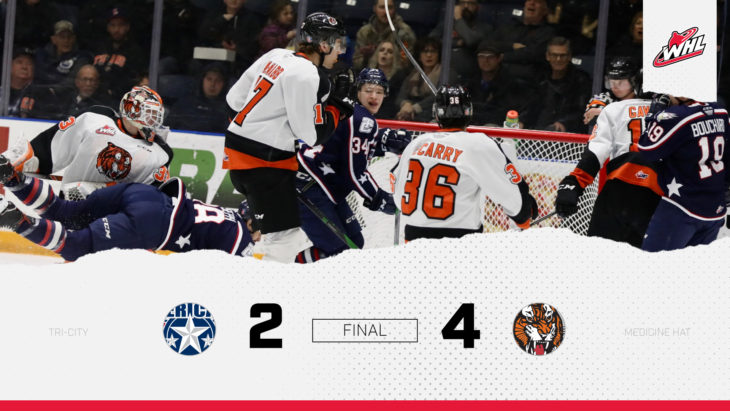 Captain James Hamblin recorded his ninth multi-goal game of the season as the Medicine Hat Tigers doubled up the Tri-City Americans 4-2.

Hamblin opened the scoring in the final minute of the first, followed 20 seconds later by a Nick McCarry goal to make it 2-0 through 20 minutes. Jadon Joseph then cut the deficit to one through 40 minutes.

2020 NHL Draft prospect Lukas Svejkovsky and Sasha Mutala (Colorado Avalanche) exchanged goals before Hamblin put the puck into the empty net to close out the win.

2020 NHL Draft prospect Garin Bjorklund made 23 saves in the win. 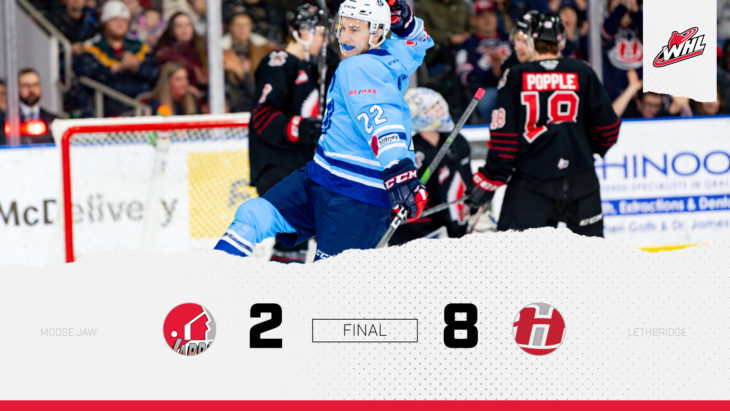 Brett Davis recorded the first hat trick of his WHL career as the Lethbridge Hurricanes trounced the Moose Jaw Warriors 8-2 in a WHL Suits Up win.

The Warriors hung with the Hurricanes through 20 minutes as Calder Anderson and Martin Lang scored for the visitors while Davis and Dino Kambeitz struck for the home side.

Lethbridge burst the game open with four goals in the second as Danila Palivko, Davis, Zack Stringer, and 2020 NHL Draft prospect Oliver Okuliar all found the back of the net. Davis completed his hat trick 6:14 into the third and Jett Jones rounded out the scoring later in the frame. 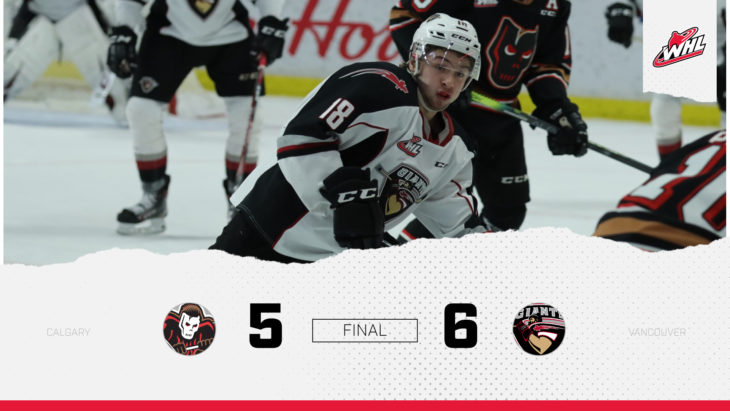 Down 5-2 to the Calgary Hitmen entering the third period, the Vancouver Giants reeled off four unanswered goals to earn a 6-5 victory Friday at home.

The win highlighted by a hat trick from 2020 NHL Draft prospect Justin Sourdif.

The Hitmen regained the three-goal lead through 40 minutes as Prokop’s second of the night and a goal by Orca Wiesblatt counted for the visitors.

In the third, Bowen Byram (Colorado Avalanche) and Tyler Preziuso scored before Sourdif netted a pair of goals, finishing his hat trick on a breakaway to put the Giants in front for the first time all game.

David Tendeck (Arizona Coyotes) made 31 saves to earn the win. 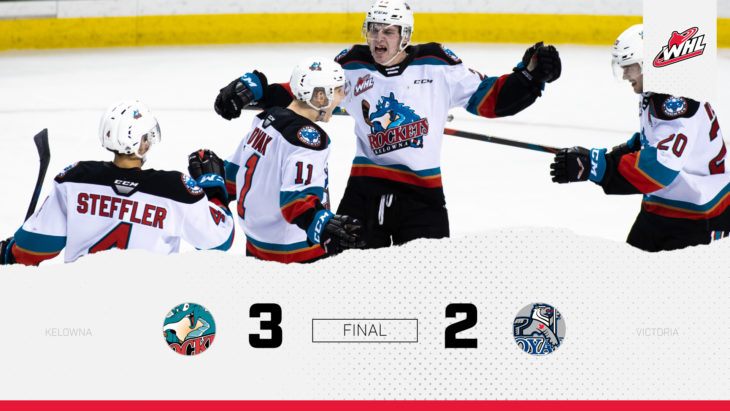 The Kelowna Rockets powered through for a 3-2 win against the Victoria Royals on Vancouver Island Friday.

Dillon Hamaliuk (San Jose Sharks) and Jake Lee scored in the second to build a 2-0 advantage through 40 minutes. Brandon Cutler scored midway through the third to cut the lead in half, but 2020 NHL Draft prospect Pavel Novak would extend the lead to two with 3:40 left in regulation.

Roman Basran turned in a 34-save effort for the victory. 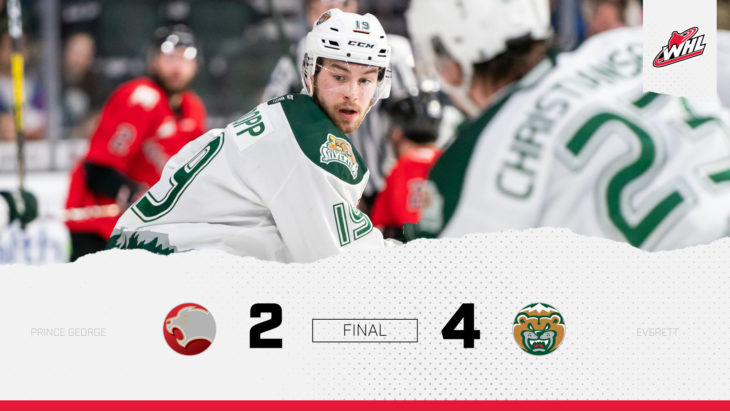 The Everett Silvertips doubled up the Prince George Cougars by a 4-2 score Friday in downtown Everett.

2020 NHL Draft prospect Michal Gut and Cougar captain Josh Maser had the only goals through 40 minutes.

Ethan Regnier broke that tie eight seconds into the third with his 11th of the season. Vladislav Mikhalchuk would tie up the game, but Dawson Butt scored 51 seconds later to restore the one-goal advantage. 2020 NHL Draft prospect Kasper Puutio iced the game with an empty-net goal.

Braden Holt made 27 saves in the victory. Ty Kolle finished with a pair of assists. 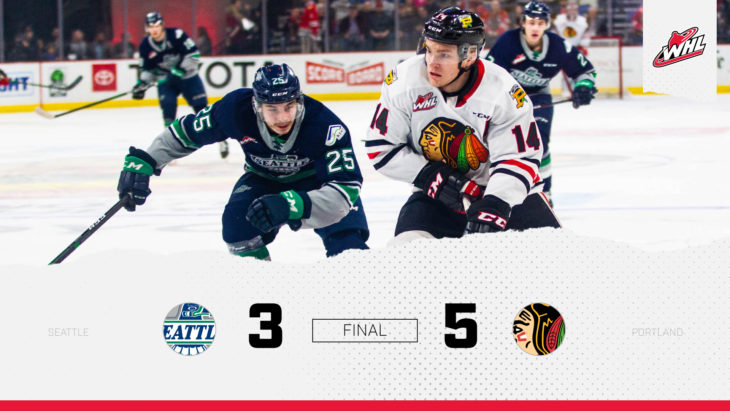 The Portland Winterhawks scored four times in the third period Friday to earn a 5-3 win over the Seattle Thunderbirds on home ice.

Goals by Andrej Kukuca and Conner Roulette had the Thunderbirds up 2-0 after 20 minutes. 2020 NHL Draft prospect Seth Jarvis then cut the lead in half with his 34th goal of the season in the second period.

Just 51 seconds into the third, Reece Newkirk (New York Islanders) tied up the game, followed by goals from Mason Mannek, Jarvis, and another 2020 NHL Draft prospect in Cross Hanas. Payton Mount got one back for the Thunderbirds, but the Winterhawks held off their opponents for the rest of the game.

Joel Hofer (St. Louis Blues) made 19 saves for the win.

Kukuca and Mount each finished with three points on the night.