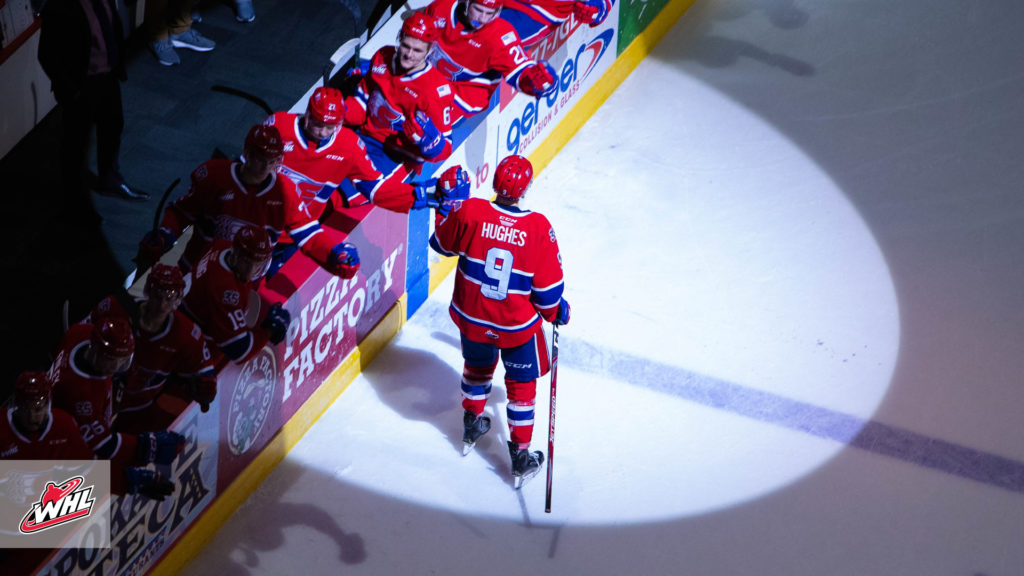 A five-game schedule of action took place Wednesday night in the Western Hockey League with four home teams claiming victories. Starting with three games in the Eastern Conference, the Brandon Wheat Kings pulled off a strong comeback in the third period to top the visiting Swift Current Broncos while the Medicine Hat Tigers’ offence operated like a well-oiled machine against their rivals from Lethbridge. In Alberta’s provincial capital a memorable first goal and another strong goaltending performance pushed the Edmonton Oil Kings past the Moose Jaw Warriors. In northern British Columbia, Joel Hofer began his defence of the WHL Vaughn Goaltender of the Month Award with a 23-save shutout against the Prince George Cougars. Finally, the Spokane Chiefs kept pace with the division-leading Winterhawks as they defended home turf against the Seattle Thunderbirds. 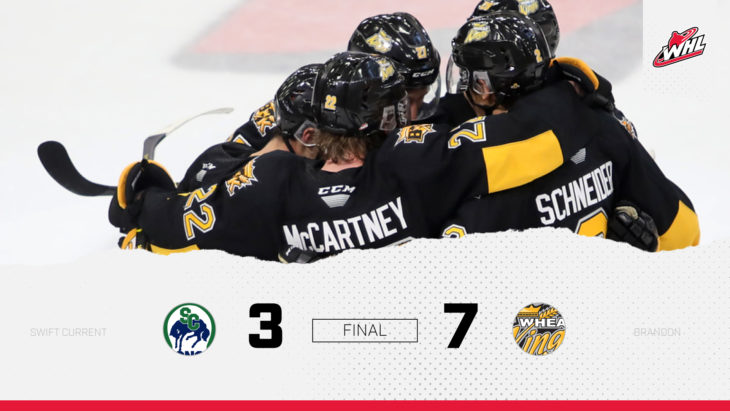 The Brandon Wheat Kings erupted in the third period for six unanswered goals Tuesday to down the Swift Current Broncos by a 7-3 score.

Duncan Pierce scored the opening goal of the game in the first period, but the Broncos followed with goals by Sergei Alkhimov, Hayden Ostir, and Aiden Bulych to take a 3-1 lead into the second intermission.

Despite the deficit, the Wheat Kings came ready to play early in the third. In a 4:40 span, goals from Lynden McCallum, Ty Thorpe, Pierce’s second of the night, and the 18th of the season from Cole Reinhardt made it a 5-3 game.

Late in the period, Thorpe and McCallum would each add their second goals of the evening. 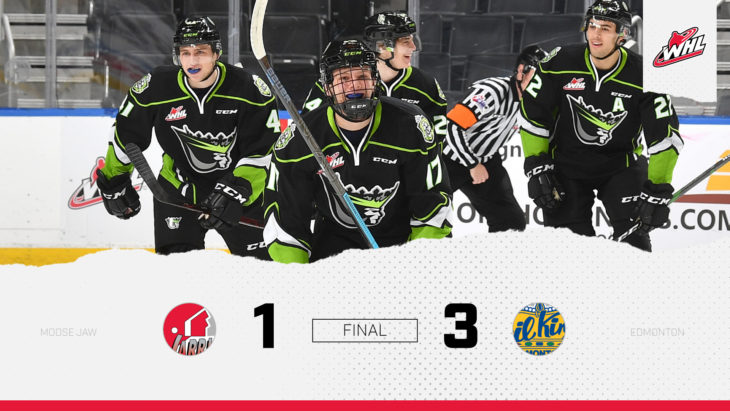 2020 NHL Draft prospect Jake Neighbours factored into a pair of third period goals Tuesday, guiding the Edmonton Oil Kings to a 3-1 victory over the Moose Jaw Warriors on home ice.

Neighbours scored the game-winning goal 2:40 into the period then drew a primary assist on an empty-net goal by Josh Williams with seconds left in regulation.

The first period saw a memorable highlight as Carson Latimer scored the first goal of his WHL career on his first shift 3:05 into the game. Owen Hardy’s 10th goal of the season would get Moose Jaw on the board in the second, but the Oil Kings were too much in the final period of play.

Stopping 24 of 25 shots, Sebastian Cossa earned his 10th victory of the season. 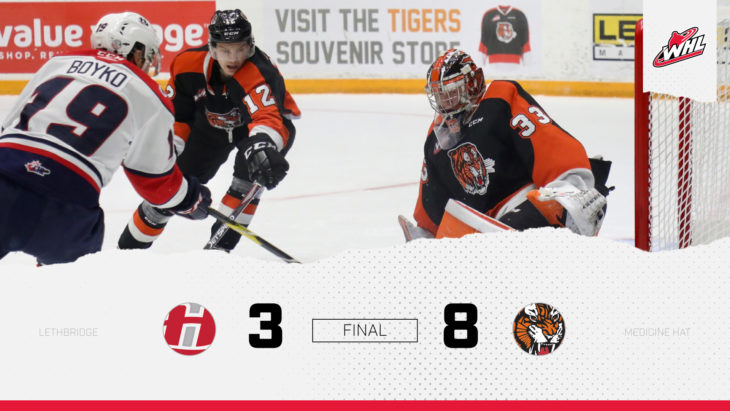 Four-point games from Ryan Chyzowski and Brett Kemp powered the Medicine Hat Tigers to an 8-3 victory over the Lethbridge Hurricanes Tuesday night at the Canalta Centre.

Each player scored twice while also adding a pair of assists. Tyler Preziuso, Noah Danielson, Dru Krebs, and Nick Perna also found the back of the net in the victory. Cole Sillinger posted three assists in the contest.

Chase Wheatcroft, Dylan Cozens (Buffalo Sabres), and Logan Barlage scored for the Hurricanes in the loss.

Garin Bjorklund stopped 31 of 34 shots for the victory. 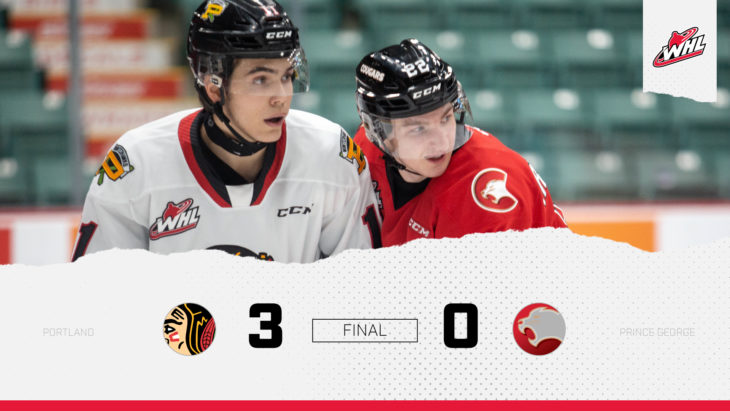 Hofer stopped five shots in the first, six in the second, and 12 in the third for the clean sheet.

Offensively, 2020 NHL Draft prospect Seth Jarvis led the way with a goal and three points. Reece Newkirk (New York Islanders) scored the game-winning goal in the first, Jarvis scored in the second, and Jake Gricius rounded out the scoring 34 seconds into the third period. 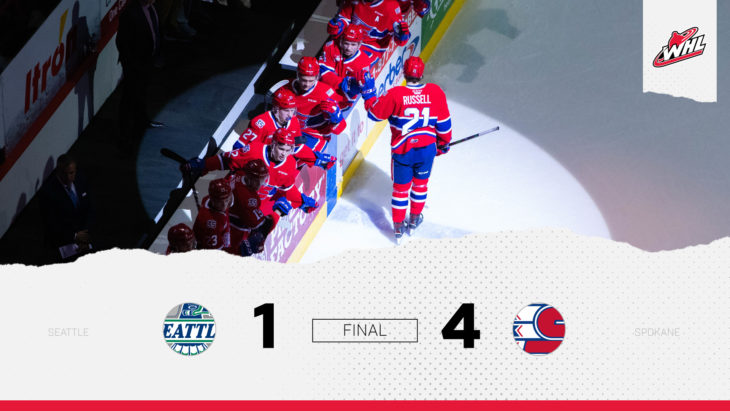 Lukáš Pařík (Los Angeles Kings) made 33 saves and the Spokane Chiefs kept pace with the Portland Winterhawks in the competitive U.S. Division Tuesday, downing the Seattle Thunderbirds by a 4-1 score.

Eli Zummack and Conner Roulette traded goals in the first period before Bobby Russell put the Chiefs ahead for good through 20 minutes. In the second, Noah King notched his third of the season as the insurance goal while 2020 NHL Draft prospect Bear Hughes found the back of the net in the third.

King and Hughes each finished with multi-point games while Cordel Larson recorded a pair of assists.