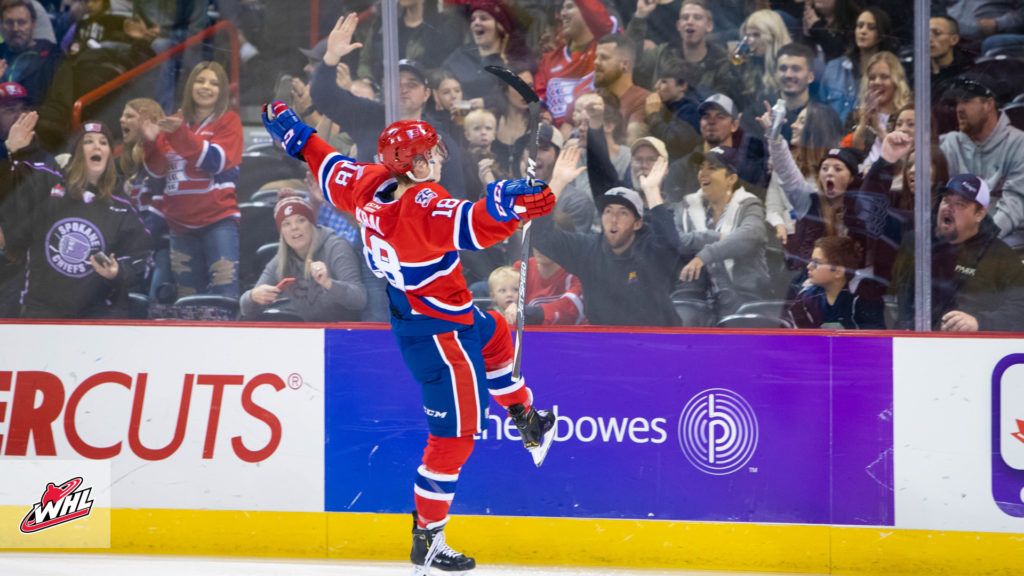 A slate of 11 games saw a full schedule of action across the Western Hockey League Saturday. In Manitoba’s capital, the Winnipeg ICE topped the visiting Regina Pats. In Saskatchewan, the Moose Jaw Warriors, Saskatoon Blades, and Red Deer Rebels all completed the night with a pair of points. In Alberta, the Edmonton Oil Kings and Tri-City Americans claimed victories. Over in British Columbia, the Victoria Royals and Kamloops Blazers made it a perfect weekend with victories. South of the 49th parallel, the Everett Silvertips and Spokane Chiefs earned wins in Washington state while the Portland Winterhawks defended home turf in Oregon. 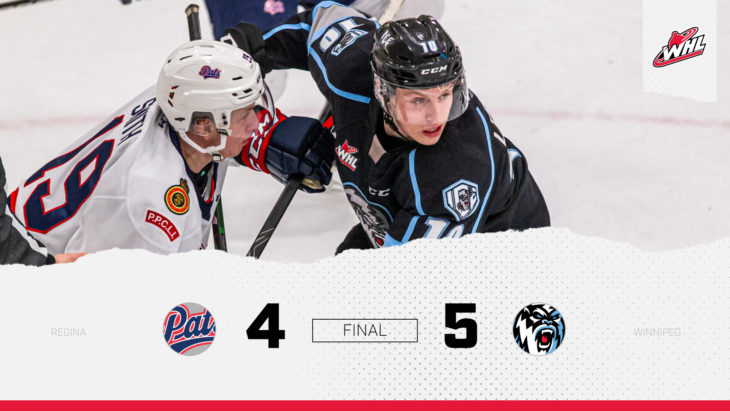 The Winnipeg ICE pushed ahead in the third period and earned a 5-4 victory against the visiting Regina Pats Saturday night.

Isaac Johnson and Michael Milne each scored twice in the contest, with Johnson adding a helper for the three-point night. Carter Massier had two of the goals for Regina in the contest.

Johnson’s two goals came in the first to bookend a goal by Ty Kolle, making it a 2-1 game through 20 minutes. Goals from Massier and Drew Englot put the Pats ahead until Milne’s first of the game drew the teams even after 40 minutes. In the third, Nino Kinder and Milne’s second of the game featured while Massier notched his second of the game as well.

Dean McNabb stopped 30 of 34 shots for his fifth victory of the season. 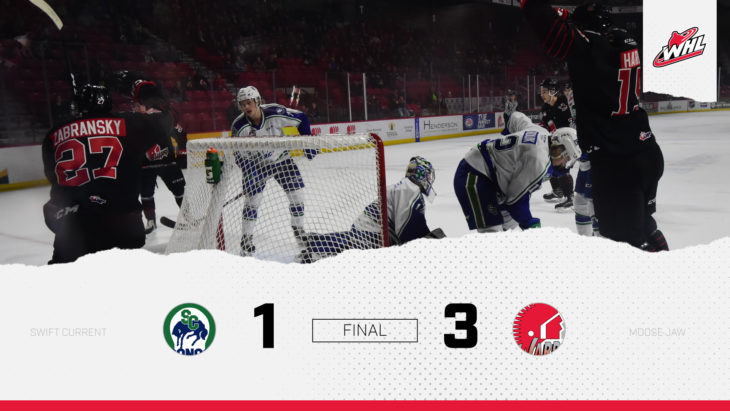 The Moose Jaw Warriors dispatched the Swift Current Broncos by a 3-1 score Saturday on home ice.

Following a scoreless first period, Brayden Tracey (Anaheim Ducks) and Libor Zabransky struck for the home side. In the third, Chase Lacombe brought the Broncos within a goal before Owen Hardy added an insurance marker with the empty-net goal.

Adam Evanoff was solid for a second consecutive game, stopping 26 of 27 shots. 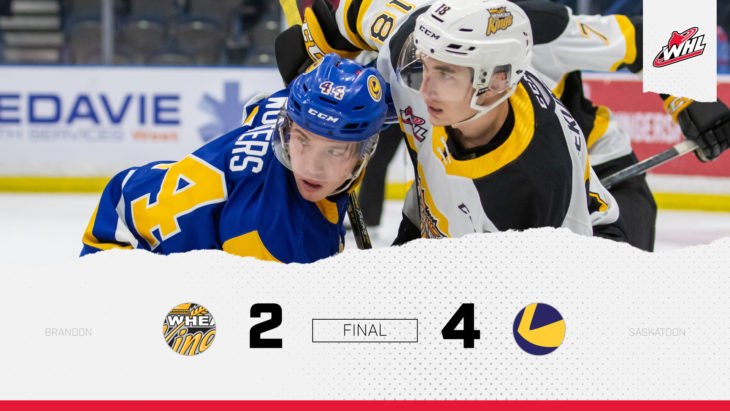 The Saskatoon Blades scored four unanswered goals in the third period Saturday on home ice to earn a 4-2 victory over the Brandon Wheat Kings.

A penalty-shot goal by Jonny Hooker and Ty Thorpe’s first of the season had the Wheaties rolling through 40 minutes, but the Blades were ready when the puck dropped in the third.

In a 7:54 span, Majid Kaddoura, Cyle McNabb, and Nolan Kneen scored for the Blades. Kyle Crnkovic added an empty-net goal to close off the victory.

Nolan Maier stopped 22 of 24 shots for the win. 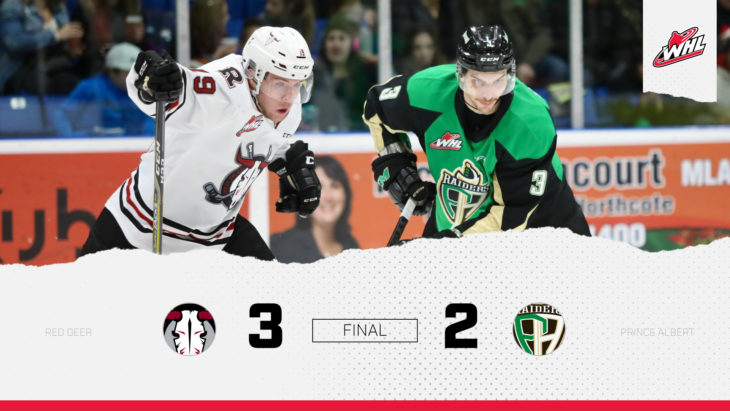 A pair of third-period goals lifted the Red Deer Rebels to a 3-2 win on the road against the Prince Albert Raiders Saturday.

Aliaksei Protas (Washington Capitals) gave the Raiders a 1-0 lead after the first, but Chris Douglas responded in the second to tie up the game after 40 minutes.

Rebels’ captain Dawson Barteaux (Dallas Stars) gave the visiting side their first lead of the night 4:22 into the third period. Brayden Watts would score a short-handed goal 12:24 into the third to tie up the game, but Dallon Melin’s third of the season came 63 seconds later to put the Rebels ahead for good.

Ethan Anders stopped 31 of 33 shots to earn the win. 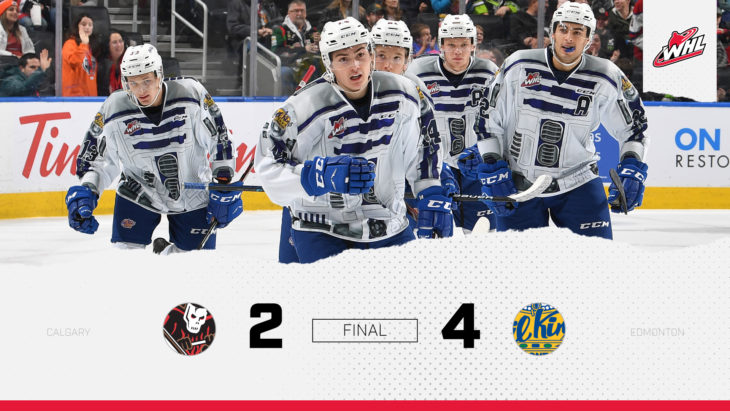 The Edmonton Oil Kings doubled up the Calgary Hitmen by a 4-2 score on Star Wars night at Rogers Place.

Josh Williams scored a pair of goals to lead the Oil Kings, striking once in the first and once again in the third. Ethan Cap and 2020 NHL Draft prospect Jake Neighbours also scored for Edmonton. Neighbours added a pair of assists for the three-point night. Matthew Robertson (New York Rangers) and Riley Sawchuk each had a pair of helpers in the win. 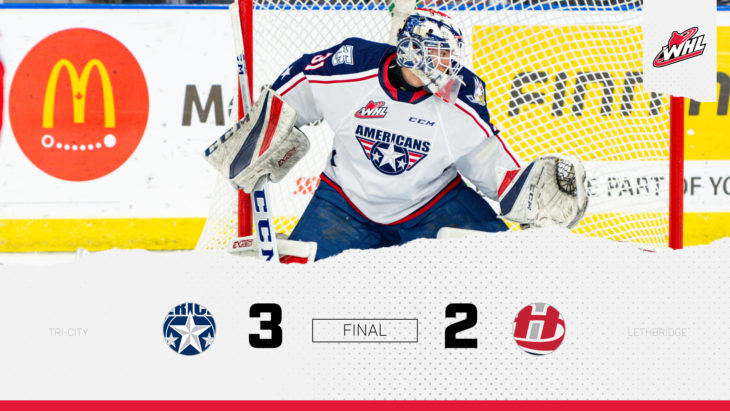 The Tri-City Americans earned a one-goal victory in southern Alberta for a second-straight night Saturday, topping the Lethbridge Hurricanes by a 3-2 score.

A similar script to Friday’s comeback win for the Hurricanes almost played out as Americans captain Kyle Olson and Edge Lambert gave the visiting side a 2-0 lead through 40 minutes. In the early part of the third, D-Jay Jerome and Alex Cotton found the back of the net to put themselves in a tie-game situation.

It would all be for naught though as Sasha Mutala (Colorado Avalanche) scored with exactly 11 minutes left in regulation to provide the difference in the contest. The game-winning goal capped a three-point night for Mutala while Olson finished with a two-point effort. Connor Bouchard had a pair of helpers in the win.

Talyn Boyko stopped 47 of 49 shots to earn the victory in regulation. 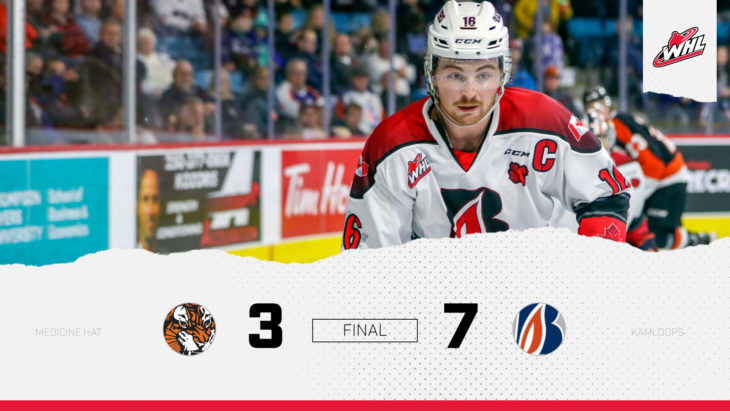 Two-goal games from captain Zane Franklin, 2020 NHL Draft prospect Connor Zary, and Ryan Hughes powered the Kamloops Blazers to a 7-3 victory against the Medicine Hat Tigers in the 2019 Orange Bowl.

Franklin and Hughes each added a helper as well for the three-point performance. Kyrell Sopotyk had the other goal for the Blazers. Sean Strange had a pair of assists in the contest.

Tigers captain James Hamblin recorded a goal and three points while Jonathan Brinkman and Tyler Preziuso also found the back of the net. 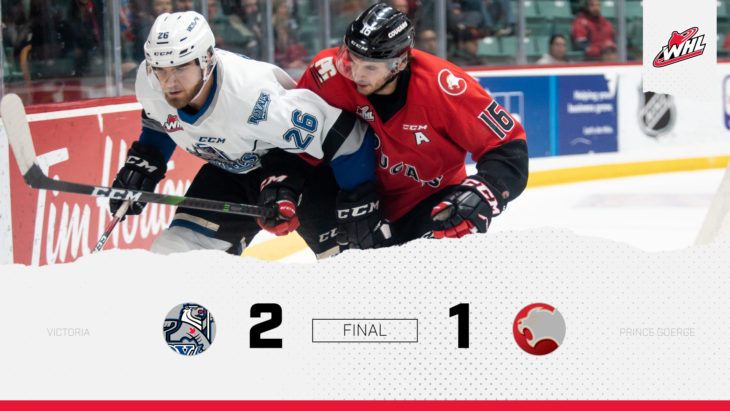 No extra time was needed Saturday between the Prince George Cougars and Victoria Royals in northern British Columbia with the Royals earning a 2-1 win in regulation.

The win was a comeback for the Royals, who trailed 1-0 after 20 minutes on a goal by Cougars’ captain Josh Maser. In the second, Kaid Oliver tied up the game and Sean Gulka notched the game-winning goal early in the third.

Shane Farkas stopped 15 of 16 shots for the victory. 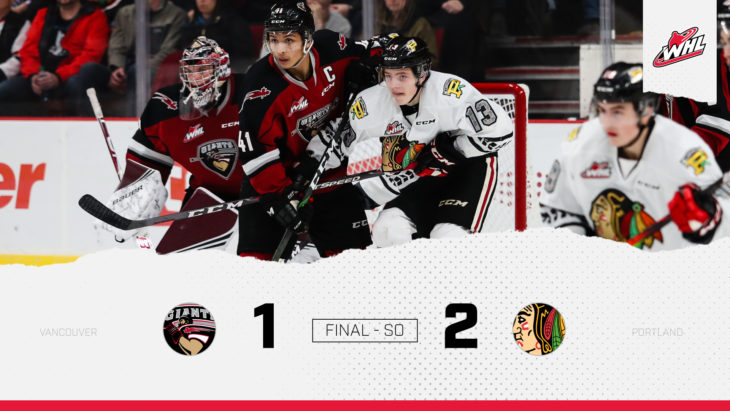 In a home-and-home set between the Vancouver Giants and Portland Winterhawks, both teams defended home ice as the Winterhawks earned a 2-1 shootout victory in Oregon Saturday.

2020 NHL Draft prospect Justin Sourdif scored in the first period and Jack O’Brien tied up the game in the second. That’s how things would stand until the shootout, when the combo of a Mason Mannek goal and Joel Hofer (St. Louis Blues) saves ended the nine-round shootout. 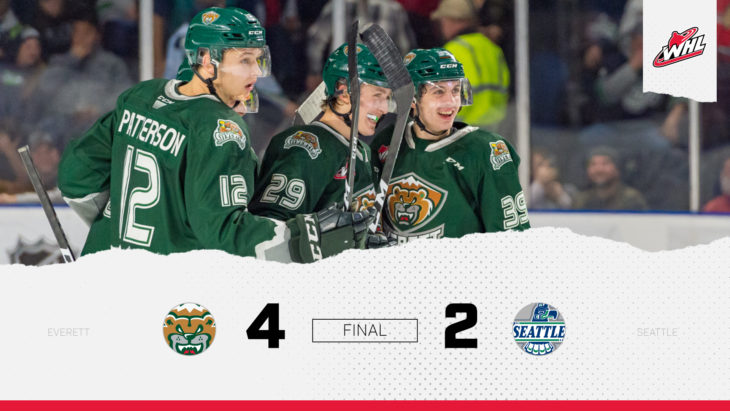 The Everett Silvertips doubled up the Seattle Thunderbirds by a 4-2 score Saturday night on the road.

Dawson Butt and Conrad Mitchell scored in the second period for the Silvertips to give them a 2-0 lead through 40 minutes. Martin Fasko-Rudas scored midway through the third period to notch the game-winning goal while Wyatte Wylie (Philadelphia Flyers) added an empty-net goal for insurance.

Goals from 2020 NHL Draft prospect Tyrel Bauer and rookie Matthew Rempe came for the T-Birds in the final half of the third.

Keegan Karki stopped 36 of 38 shots for the victory. 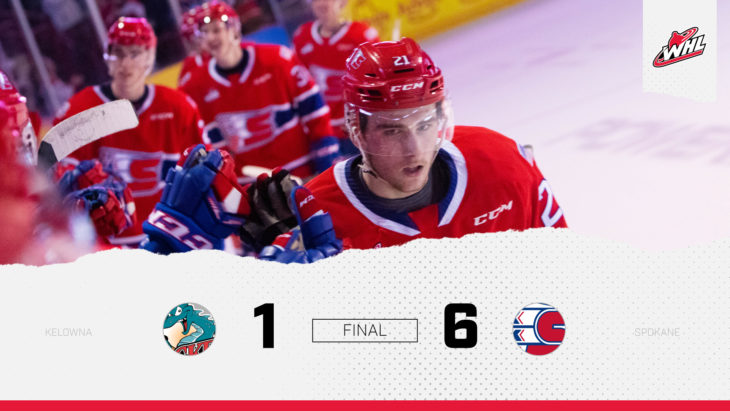 The Spokane Chiefs scored six unanswered goals Saturday to top the Kelowna Rockets by a 6-1 score.

2020 NHL Draft prospect Jack Finley each had a goal and three points to lead the offensive performances.

Mark Liwiski had the lone goal for Kelowna in the loss.