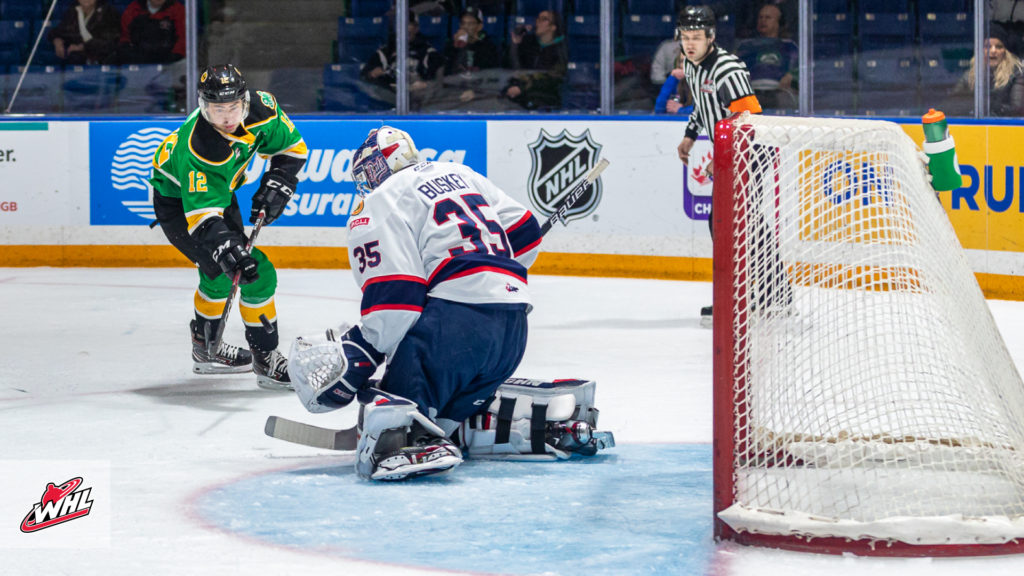 A busy Friday night of action in the Western Hockey League saw 10 games of action throughout four provinces and one state. The Brandon Wheat Kings and Edmonton Oil Kings each claimed home victories thanks to shutout performances by their goaltender. The lone game of the night in Saskatchewan saw the two teams combine for 12 goals with the Swift Current Broncos emerging victorious. The Saskatoon Blades began a road trip through Alberta with an overtime win in Red Deer while the Seattle Thunderbirds also claimed a road win in Alberta, emerging victorious in Lethbridge. The Medicine Hat Tigers defended home turf successfully. In British Columbia, the Kamloops Blazers and Victoria Royals each enjoyed 2-1 victories while the Prince George Cougars earned their second win in as many Fridays against the Everett Silvertips. South of the 49th parallel, the Portland Winterhawks downed the Spokane Chiefs. 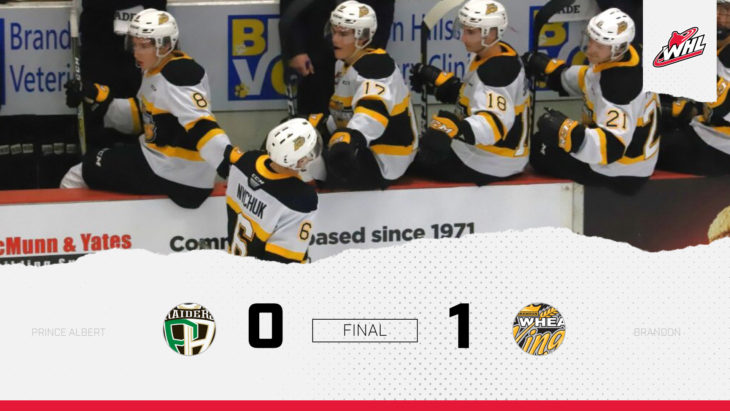 Jiri Patera (Vegas Golden Knights) turned in a 29-save shutout and the Brandon Wheat Kings earned a 1-0 win against the Prince Albert Raiders Friday on home ice.

Patera stopped 11 shots in the first, seven in the second, and 11 more in the third for his second shutout of the season and the third of his WHL career. The lone goal in the game came via defenceman Chad Nychuk in the middle of the second. 2020 NHL Draft prospect Ben McCartney had the lone assist on the goal.

Boston Bilous stopped 20 of 21 shots in the narrow loss. 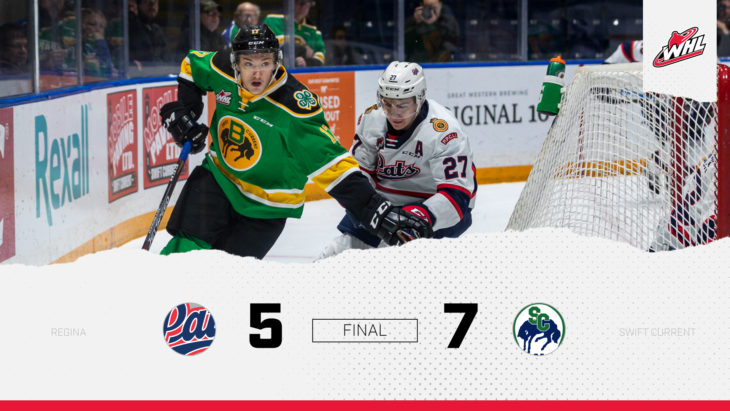 On Retro Night in Swift Current, old-time hockey featured as the Swift Current Broncos and Regina Pats combined for 12 goals in a 7-5 win for the Broncos.

Broncos captain Ethan Regnier had one of the leading offensive performances with a goal and four points for the home side. Jaxan Kaluski contributed a pair of goals, defenceman Sam McGinley scored his first WHL goal as part of a three-point night against his former club, and 2020 NHL Draft prospect Kasper Puutio picked up three helpers. Tyler Smithies and Hayden Ostir each contributed a goal and an assist while Cole Nagy scored his first a Bronco uniform. 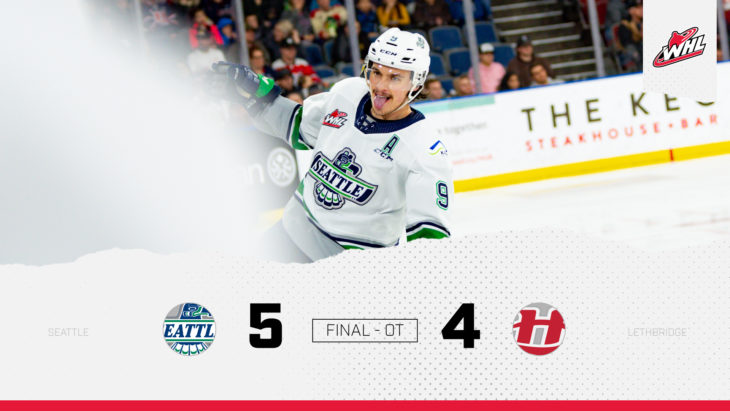 Henrik Rybinski (Florida Panthers) set up Payton Mount for the game-winning goal in overtime Friday as the Seattle Thunderbirds topped the Lethbridge Hurricanes 5-4 in southern Alberta.

The assist completed a three-point night for Rybinski, who scored Seattle’s first goal of the game and also assisted on their third of the contest. Conner Bruggen-Cate, former Hurricane Keltie Jeri-Leon, and Max Patterson also scored for the Thunderbirds in the win. Jeri-Leon and Bruggen-Cate each finished with multi-point performances in the win.

Chase Wheatcroft and Zack Stringer scored in the first while Justin Hall and Logan Barlage struck in the second to account for Lethbridge’s offence in the game. Wheatcroft and Hall each finished with a goal and three points in the contest.

Roddy Ross (Philadelphia Flyers) made 25 saves for the victory. 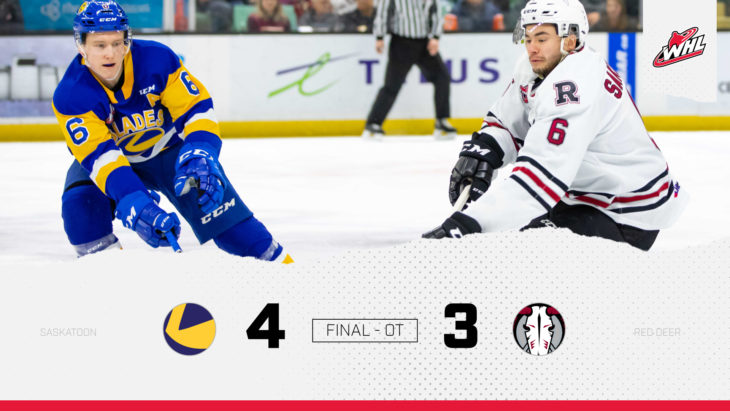 Saskatoon Blades captain Chase Wouters scored on an odd-man rush 3:35 into overtime Friday to lift his team to a 4-3 win against the Red Deer Rebels in central Alberta.

Arshdeep Bains and Scott Walford traded goals in the first period. Josh Tarzwell put the Rebels ahead in the second, but Nolan Kneen and Kyle Crnkovic responded to put the visitors up 3-2 after 40 minutes.

Bains struck for his second of the game as the lone goal of the third to force extra time where Wouters would take a feed from Tristen Robins for   the game-winning goal.

Nolan Maier stopped 30 of 33 shots to claim the win. 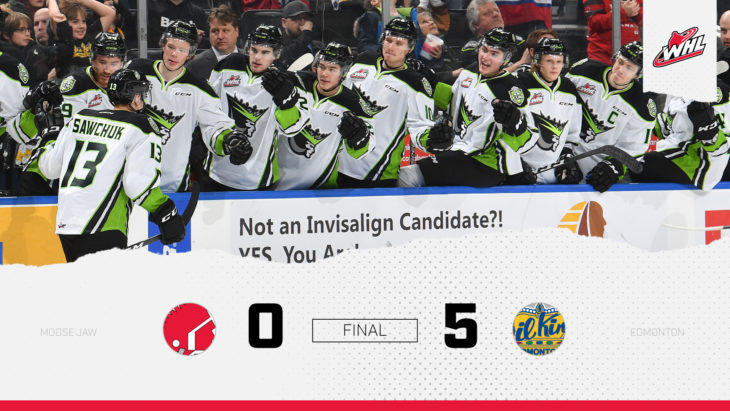 Five different skaters scored for the Edmonton Oil Kings Friday and Sebastian Cossa posted a 14-save shutout on home ice as they earned a 5-0 win against the visiting Moose Jaw Warriors.

Cossa stopped seven shots in the first, three in the second, and four in the third for the clean sheet. 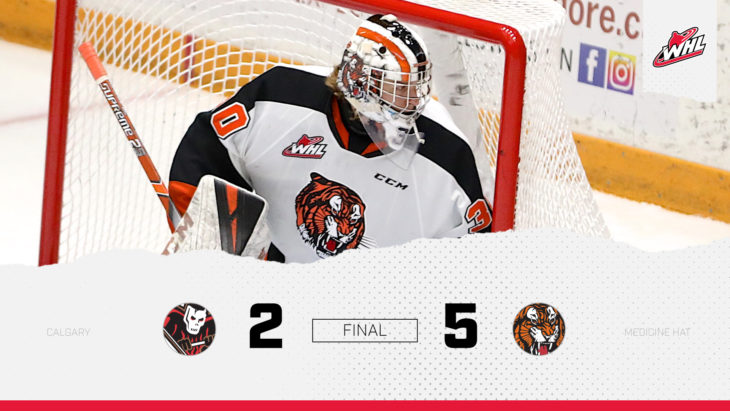 Jonathan Brinkman scored the other goal for the Tigers, who scored twice in each of the first two periods and once in the third. Corson Hopwo tallied a pair of helpers in the win.

Between the pipes, Mads Søgaard (Ottawa Senators) made 20 saves on 22 shots for the victory. 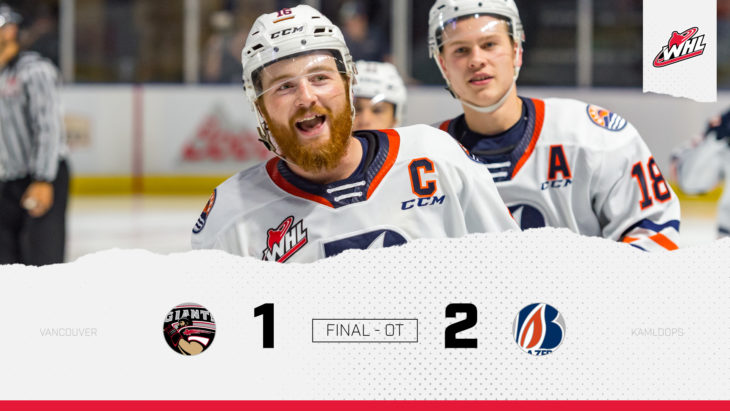 Captain Zane Franklin scored on a deflected shot from the point 3:20 into overtime Friday as the Kamloops Blazers topped the Vancouver Giants by a 2-1 score.

Logan Stankoven opened the scoring in the second period before Tristen Nielsen scored in the final minute of regulation to force overtime. The Blazers were able to rejoice in their first home game of 2020 though as Franklin’s quirky goal put the Blazers ahead in overtime.

2020 NHL Draft prospect Dylan Garand turned aside 19 of 20 shots for the victory. 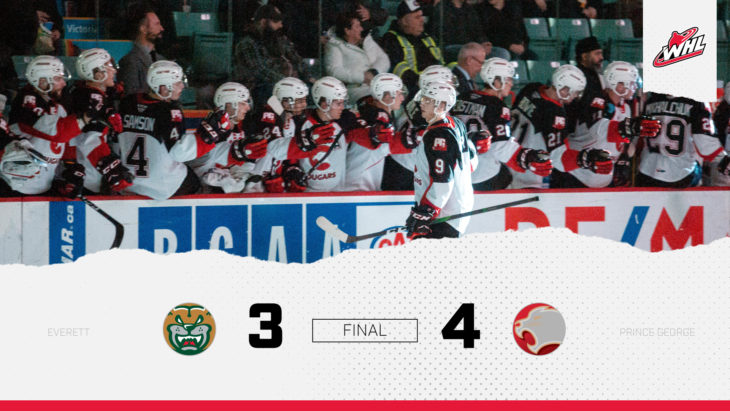 For the second Friday in a row, the Prince George Cougars got the better of the Everett Silvertips by a 4-3 score.

This Friday’s result came in front of the Cougars’ home fans at the CN Centre as third-period goals from Vladislav Mikhalchuk and Ryan Schoettler provided the difference.

Tyson Upper opened the scoring, but the Silvertips responded with a pair of goals from captain Bryce Kindopp in the second. After Ethan Samson put the teams level through 40 minutes, Mikhalchuk struck 35 seconds into the third to give the Cougars their second lead of the game.

Wyatte Wylie (Philadelphia Flyers) would score near the midway mark of the period, but Schoettler responded on the power play just shy of two minutes later in game play to secure the win.

Taylor Gauthier stopped 39 of 42 shots to earn the victory. 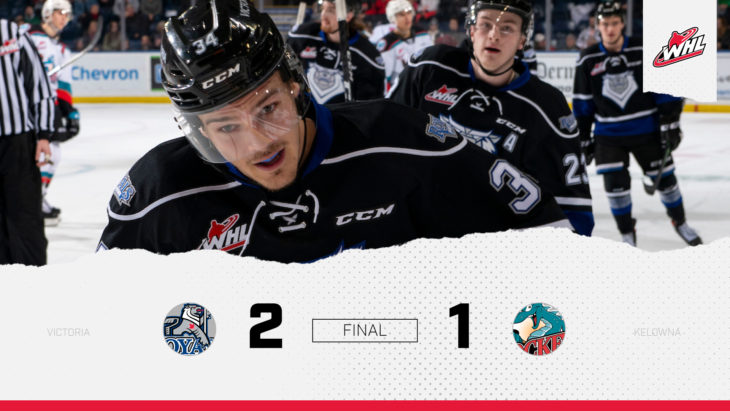 Kaid Oliver scored in the first and third period as the Victoria Royals doubled up the Kelowna Rockets at Prospera Place Friday night.

Oliver struck for his first goal with 6:37 left in the opening period. Kaedan Korczak (Vegas Golden Knights) responded for the Rockets in the second period. Oliver would net his second of the night off a play that saw him redirect the puck with his skate with 5:39 left in regulation.

Shane Farkas finished with 32 saves to earn the win. 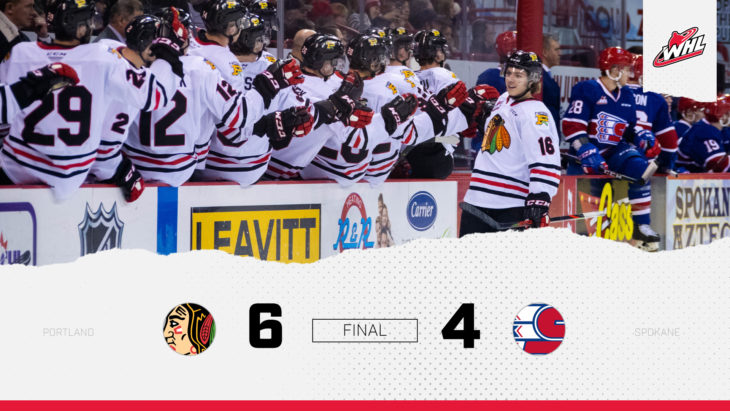 The Portland Winterhawks held off a furious charge by the Spokane Chiefs to earn a 6-4 win Friday in eastern Washington.

Cordel Larson opened the scoring for the Chiefs, but the Winterhawks responded with goals from Lane Gilliss Gabe Klassen and a pair of strikes by Reece Newkirk (New York Islanders) to take a 4-1 lead 92 seconds into the second period.

A bright spot for the Chiefs came in the form of Beckman’s goal, which set a franchise record by extending his goal streak to 10 games.