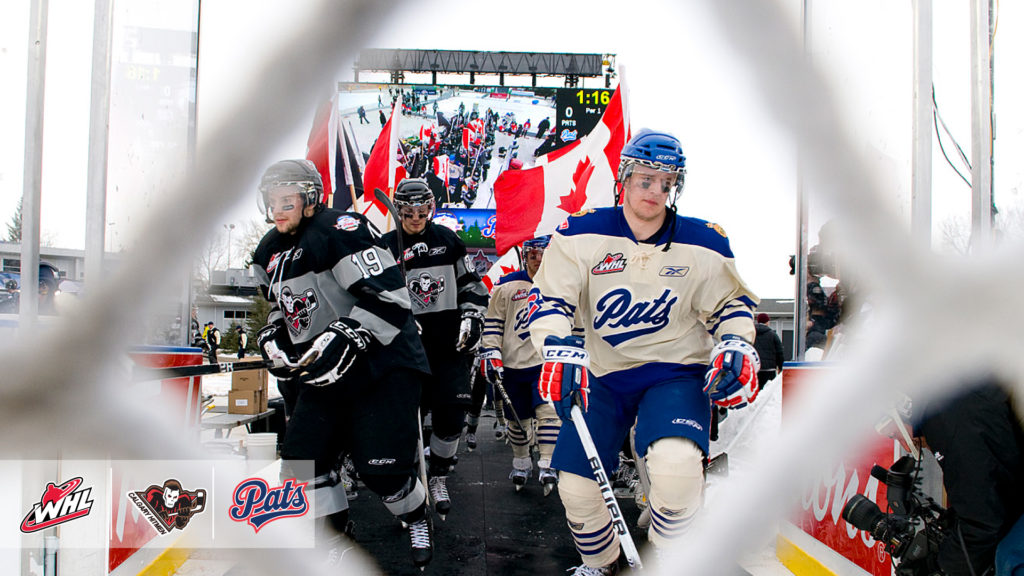 The Western Hockey League will be heading outdoors once again on Sunday, October 27, 2019.

Announced by the Regina Pats and Regina Exhibition Association Ltd (REAL) Monday, the Pats will renew their outdoor rivalry with the Calgary Hitmen at Mosaic Stadium. It will follow the Tim Hortons NHL Heritage Classic on Saturday, October 26, 2019 between the Calgary Flames and Winnipeg Jets.

Of course, the Hitmen and Pats have the honour of being the two teams to participate in the last outdoor WHL game on February 21, 2011, playing to a 3-2 result in favour of the Pats at McMahon Stadium in Calgary. The game also became the benchmark, serving as the first outdoor WHL and Canadian Hockey League game on Canadian soil. At the time, the game set a new CHL record for single-game attendance with 20,888 bodies braving the February chill for 60 minutes of hockey action.

However, fans almost got a glimpse of overtime action in the great outdoors as the game remained tied into the final minute, with future Stanley Cup Champion Chandler Stephenson notching the deciding goal with 37 seconds left in regulation. The event served as a culmination of a big hockey weekend in Calgary, with the Flames shutting out the Montreal Canadiens 4-0. WHL Alumni Jarome Iginla collected an assist on the fourth goal of the game for the Flames.

As good as the game between the Hitmen and Pats turned out, it wasn’t the first taste of outdoor action for WHL fans that season. A month earlier, the Kootenay ICE and Spokane Chiefs took their rivalry outdoors, resulting in an 11-2 win for the Chiefs on January 15, 2019. Powered by captain Jared Cowen and future Tampa Bay Lightning standout Tyler Johnson, the Chiefs were successful in picking up the victory. However, the ICE got the last laugh, later capturing the Ed Chynoweth Cup for the third time in team history later that year.

The ICE and Chiefs played in front of 7,075 fans at Avista Stadium, home of the Northwest League’s Spokane Indians, in the Rockstar Outdoor Hockey Classic.

This year’s contest will provide a high level of talent as well. On the home side, the Pats will have overage talents Robbie Holmes, Austin Pratt, and Dawson Holt guiding the team’s group of forwards with the likes of Ty Kolle and Riley Krane also looking to build upon productive seasons. In net, the Pats should once again feature the tandem of Max Paddock and Dean McNabb, with the pair showing signs of strength throughout last season and eager for more success this year.

On the Hitmen’s side, general manager Jeff Chynoweth has put together a roster over the past two seasons that has high hopes for the coming campaign. Leading the team up front is captain and Ottawa Senators prospect Mark Kastelic while overage forward James Malm will challenge for one of the team’s top offensive roles as well. Also on the rise are the likes of Toronto Maple Leafs prospect Riley Stotts and Vancouver Canucks prospect Carson Focht who should make the Hitmen an offensive threat with each changing line.

The off-season acquisition of Canucks’ prospect Jett Woo as well as the return of Philadelphia Flyers prospect Egor Zamula could make the Hitmen one of the most feared defensive teams in the league as well. In net, Jack McNaughton will look to pick up where he left off after a strong rookie performance saw him record 25 wins between the pipes for Calgary last season, taking them to the second round of the 2019 WHL Playoffs.