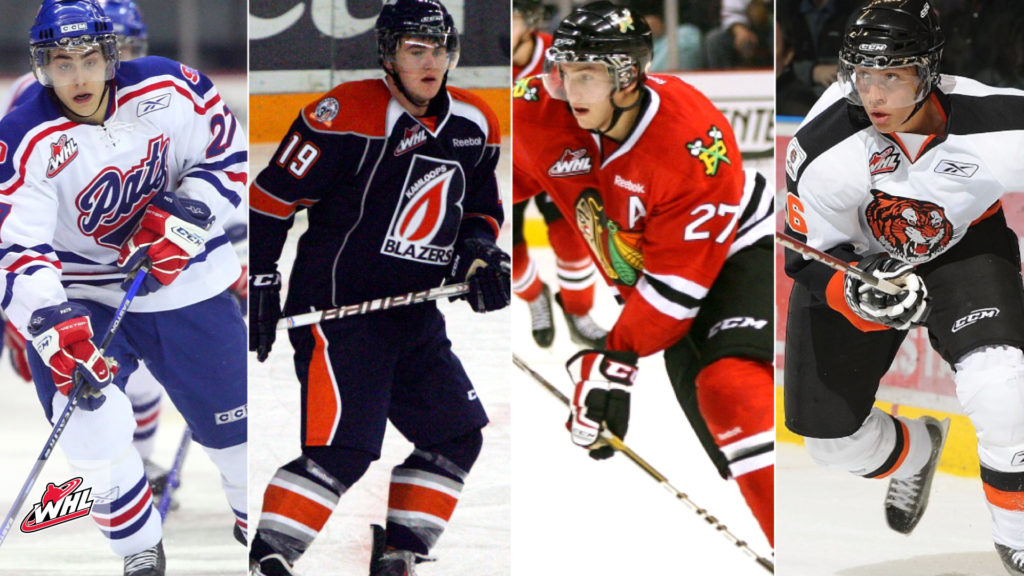 With the 2020 IIHF World Junior Championship and 2020 Western Hockey League Trade Deadline firmly in the rear-view mirror, teams are now focused directly on the stretch run to close out the 2019-20 WHL Regular Season.

The talk of the WHL right now are the Portland Winterhawks, who haven’t lost in regulation since a 4-1 defeat at the hands of the Kamloops Blazers on Saturday, November 30, 2019. Their 19-game streak has seen them post an incredible 17-0-1-1 record, including winning five-straight games. They’re also on pace to challenge some significant WHL records should their success continue for the remainder of the regular season.

Remarkably, the Winterhawks have already guaranteed themselves of one improvement. With a 33-6-2-3 record through 44 games, they’d still maintain a 0.537 winning percentage if they didn’t win another single game until the end of the regular season, giving them their 11th-straight season of a 0.500 record or better to tie them with the Kelowna Rockets for third place.

Those 33 wins are also key for the Winterhawks, who have 24 games left on their regular season schedule. Playing at their current pace, that’d add roughly 19 more victories to their win total. That would give them 52 victories on the season, the second-most of any WHL team in a 68-game season next to the Prince Albert Raiders, who set the record last season with a 54- win campaign.

Even playing at a 0.500 pace for the rest of the season would put the Winterhawks one win behind the 1972-73 Saskatoon Blades for the fifth-most wins in a 68-game season.

Attempting to challenge for the lead in the Western Conference are the Kamloops Blazers, who are on an eight-game winning streak and nine goals shy of becoming the first WHL team to hit the 200-goal plateau this season. They’re also on pace for some team history with their current goal-scoring pace set to give them 295 goals by the end of the regular season. That’d be the most since they potted 298 in the 1998-99 WHL Regular Season.

With Centazzo already surpassing the 30-goal mark, 2020 NHL Draft prospect Connor Zary, who has 28, and captain Zane Franklin, who has 25, could easily be the next ones to reach and surpass the figure.

More recently, the Blazers also performed well in the 2011-12 WHL Regular Season, netting 290 goals on the strength of three players surpassing the 30-goal plateau. In that campaign, Brendan Ranford notched 40 goals while Tim Bozon and Colin Smith collected 36 and 35 respectively.

Death, taxes, and a fiercely competitive East Division are the three certainties in life. The Brandon Wheat Kings are making that statement ring true this season thanks to a nine-game winning streak.

With the Winnipeg ICE holding onto the division lead at the moment with 55 points, the fourth-place Saskatoon Blades are just eight points behind with the Prince Albert Raiders and aforementioned Wheat Kings in the middle of that quartet. It’s even more amazing when considering the minimum lead in the other three divisions in by nine points, with two of those being double-digit leads.

It’s shaping up to be one of the closest races for the East Division title in recent memory. Since the WHL went to a four-division system for the start of the 2001-02 WHL Regular Season, the 2007-08 campaign has been the lone one where the top four teams were separated by single-digit points, with a six-point spread that season. The next closest was the 2013-14 campaign where the top quartet were separated by 10 points.

Looking back at the 2007-08 season, the Regina Pats claimed the division title down the stretch, finishing with 94 points to 90 for the Wheat Kings, 89 for the Swift Current Broncos and 88 for the Warriors. Jordan Eberle led that year’s division-winning Pats team with a 42-goal performance. This year’s goal-scoring leader among East Division skaters comes courtesy Wheaties forward and Colorado Avalanche prospect Luka Burzan, who has 24.

The 2019-20 WHL Regular Season has provided fans of the WHL with some incredible streaks.

Just a few of the leading performances this season include 17-game point streaks by Spokane Chiefs forwards Adam Beckman and Eli Zummack and Portland Winterhawks forward Reece Newkirk, a 10-game goal-scoring string by Beckman, a seven-game goal-scoring streak by Lethbridge Hurricane Oliver Okuliar, and a 14-game assist streak by Cole Fonstad with the Prince Albert Raiders and Everett Silvertips.

This past weekend, Medicine Hat Tigers captain James Hamblin became the fourth player this season to record a point streak of 15 or more games, registering four goals Saturday followed by a single assist in Sunday’s game. There is a still a ways to go to match the volume of points streaks of 15 games or more with there being seven in each of the last three seasons and a decade-high eight in the 2010-11 campaign.

Coincidentally, that season also featured point streaks by a skater for the Chiefs, Winterhawks, and Tigers of 15 games or more as Tyler Johnson, Sven Bärtschi, and Emerson Etem all hit or surpassed the mark that season.