WHL Throwback Thursday: The start of something special 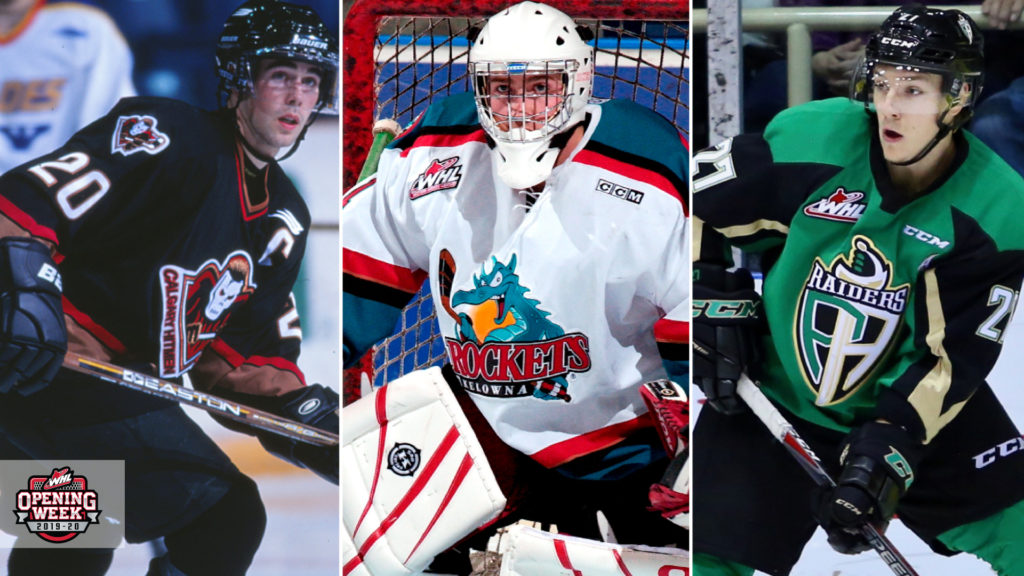 Hockey is in the air once again throughout the Western Hockey League.

After players and teams went through an enthralling 2019 WHL Pre-season, the puck finally dropped on the 2019-20 WHL Regular Season Friday with seven games as part of 20 games throughout the first three days of the season.

WHL Opening Week, which extends through to Sunday, September 29 this year, closes off the first two weekends of play as teams look to separate themselves further from the pack. In previous years, this time period has allowed teams to put the wheels in motion for their run at a WHL Championship while other teams and individuals have found a way to enter the WHL Record Book with their performances.

Just last year, the eventual Ed Chynoweth Cup Champion Prince Albert Raiders did both. Bursting out to a 4-0-0-0 start, the Raiders faced a strong test in their fifth and final game of WHL Opening Week, taking on a Saskatoon Blades team that was undefeated as well, sitting at 3-0-0-0. Still deadlocked in a 0-0 tie in the second period, the trio of Justin Nachbaur, Ozzy Wiesblatt, and Ottawa Senators prospect Parker Kelly found the back of the net at 7:30, 7:39, and 7:46 into the middle period; respectively.

In addition to giving the Raiders an insurmountable 3-0 lead in the game, the trio tied the 1989 Swift Current Broncos for the second-fastest three goals scored in a single WHL regular season game.

As dreams of the Ed Chynoweth Cup become realized, so too have those of winning the Memorial Cup. Set to host the 2020 Memorial Cup Presented by Kia this coming May, the Kelowna Rockets scored a buzzer-beating victory in overtime against the Spokane Chiefs Saturday to begin their drive in the 2019-20 season. Back in the 2003-04 season, the Rockets also hosted the tournament, eventually winning their first and only Memorial Cup to date. However, that year’s start wasn’t as strong until the team reached their third game.

Earning a tie and a loss in their first two games, the Rockets found a spark in the third game, earning a 6-0 thumping of the Prince George Cougars. That would set the Rockets on the right path to earning the Scotty Munro Memorial Trophy that season as regular season. It was also the first of Guard’s 13 shutouts that season, making him the first WHL goaltender to record that many shutouts in a single season.

Although he now shares the record with Bryan Bridges of the Seattle Thunderbirds and Darcy Kuemper of the Red Deer Rebels, the roots to one of the league’s best-ever single season goaltending performance began in 2004’s edition of WHL Opening Week.

Each year’s WHL Opening Week has also provided players with the opportunity to begin their campaign for claiming the league’s individual awards.

With Hitmen forward Pavel Brendl winning the WHL’s scoring title in the 1998-99 season and Brad Moran earning the runner-up honours, the Hitmen were a near-unstoppable force, winning their first WHL Championship and coming within a goal of claiming the Memorial Cup.

The following season, the tables were flipped in the WHL scoring race. Brad Moran claimed the league’s honours for top scorer and top player in the 1999-00 season, posting 120 points (48G-72A) in 72 games as the Hitmen won the Central Division and advanced to the Eastern Conference Championship. Brendl would finish closely behind in second place with 111 points (59G-52A).

Moran wasted no time in making his intentions for the season clear either. In his team’s opening game of the season, Moran potted five points (4G-1A) in a 6-5 win against the Lethbridge Hurricanes. In the span of 9 minutes 29 seconds in the first period, Moran recorded a natural hat trick, then added the game-winning goal with exactly three minutes left in regulation. He also had the lone assist on the team’s fifth goal of the game.