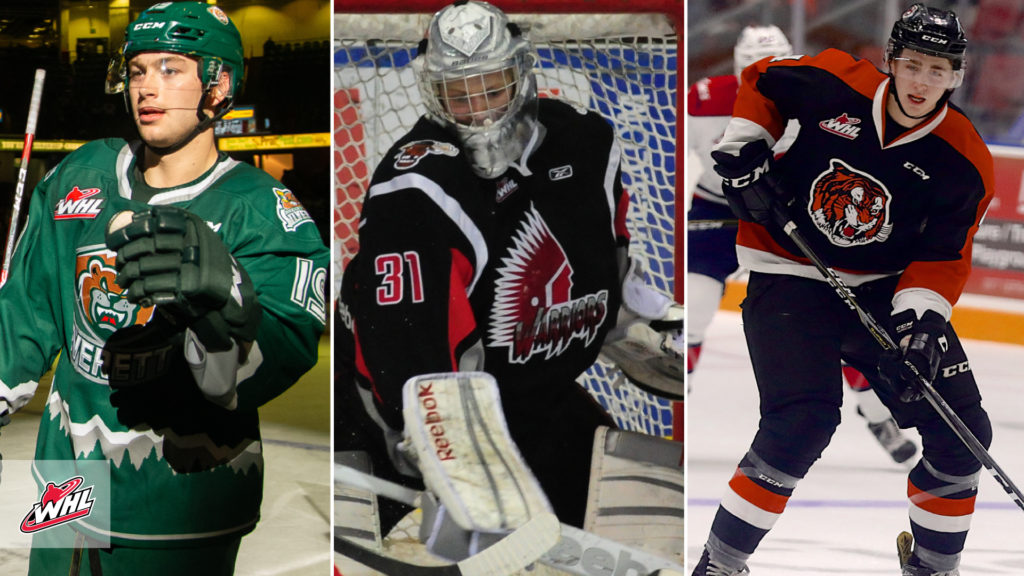 The arrival of October means a return to the best time of year when the sports schedule is jammed with games of all levels throughout each week.

It’s also a perfect chance to reflect on the events of the past and see how they tie into the present.

Tuesday’s game between the Medicine Hat Tigers and Portland Winterhawks saw the Tigers pull off a rare feat, scoring two goals in four seconds. The feat, completed by Brett Kemp and Daniel Baker was slow in comparison to the WHL record for the two fastest goals, accomplished in early October by another Central Division team. On October 3, 1998, the Calgary Hitmen received a pair of late goals from Pavel Brendl and an empty-net goal from Brad Moran two seconds later. Like it did for the Tigers, the goals provided part of the difference in the victory.

Taking a visual look into the past, this week’s video feature focuses on the opening of Mosaic Place, home of the Western Hockey League’s Moose Jaw Warriors. After securing their first home victory on September 30 in a shootout against the Prince Albert Raiders, the Warriors recorded their first-ever shutout in the new building on October 10, 2011, blanking the Prince George Cougars 6-0. The honour of the shutout belonged to goaltender Luke Siemens, who made 21 saves in the contest. It wouldn’t be his last standout performance either as Siemens would go on to star with the University of Alberta, winning a national championship in 2014.

South of the 49th parallel, the Everett Silvertips are off to another strong start, with captain Bryce Kindopp leading the way. His 14 points (8G-6A) through six games lead all WHL players in regular-season scoring and the Lloydminster, Alta. product doesn’t show any signs of slowing down. His start also puts him among some elite company to begin the regular season. 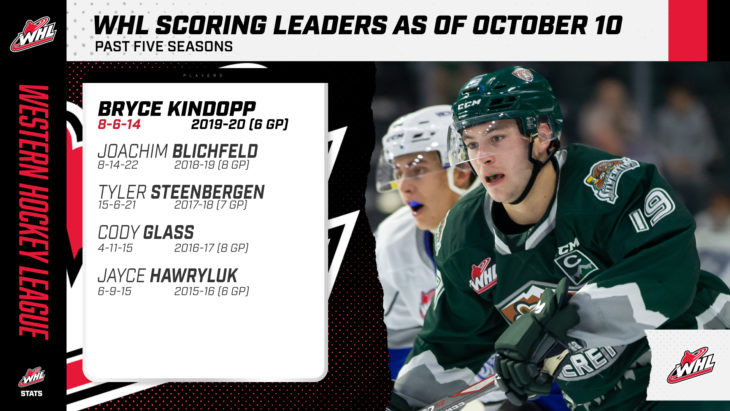 Kindopp is a leader among members of his own team in terms of leading scorers out of the gate in the past five seasons. Since the start of the 2015-16 season, Kindopp has the most points of any Silvertip as of October 10. Former teammates Patrick Bajkov and Connor Dewar were the only other two to reach double digits, doing so at the beginning of the 2017-18 WHL Regular Season. It took the pair eight games to reach 12 and 10 points; respectively.

NHL: The start of the season has been kind to Leon Draisaitl, who played in the WHL for the Prince Albert Raiders and Kelowna Rockets. The Edmonton Oilers forward entered play Thursday tied for third in league scoring while finding his way in a five-way tie for the league lead in assists with six. On the blue line, Toronto Maple Leafs defenceman Morgan Rielly was tied for second in defensive scoring, posting five assists through four games. The former Warriors rearguard is coming off a career-high 72 points (20G-52A) last season.

Canada West: Guarding the net, WHL Alumni Matt Berlin and Riley Lamb were both sharp to begin their Canada West careers. Berlin stopped all 20 shots sent his way in Alberta’s win against the UBC Thunderbirds. That same day, Lamb stopped 26 shots in a 2-0 win for the Manitoba Bisons against the Lethbridge Pronghorns.

AHL: Conner Bleackley made quite the impression in his season debut with the American Hockey League’s (AHL) Texas Stars. The former Red Deer Rebels captain scored twice for the Stars last Saturday in a 5-3 loss to the Manitoba Moose. The game also featured the first goals of the season from former Winterhawks forward Skyler McKenzie and former Prince George Cougar Jansen Harkins for the Moose.

ECHL: The 2019-20 ECHL Regular Season begins Friday, October 11, but players have already had a chance to hone their skills with pre-season action. Making the jump from the WHL to the ECHL is Zack Andrusiak, formerly of the Silvertips, Seattle Thunderbirds, Prince Albert Raiders and Tri-City Americans. After scoring 80 goals in his WHL regular-season career, Andrusiak wasted no time in finding the back of the net in pre-season action, posting three points (2G-1A) in a pair of games.

European spotlight: In the Elite Ice Hockey League, defenceman Matthew Pufahl is playing a key role with the Glasgow Clan in his second season in Europe. Pufahl has five points (2G-3A) in six games to lead all defencemen on his team as the Clan started the season 5-1-0. After accessing his WHL Scholarship with the Acadia Axemen, Pufahl played in the ECHL and in Slovakia during the 2018-19 season.