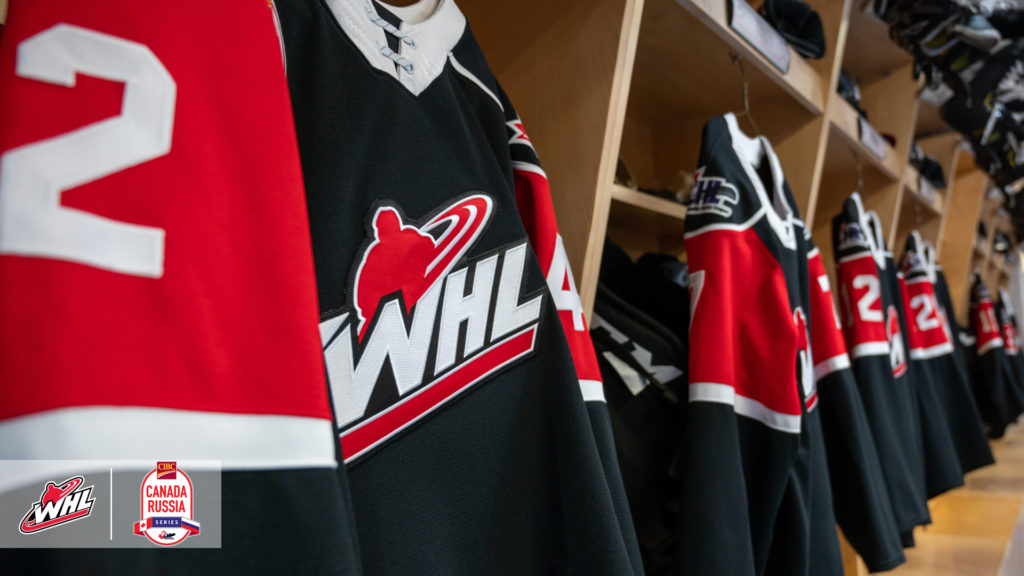 Now in its 17th season, the CIBC Canada Russia Series has showcased top-tier talent from throughout the Canadian Hockey League on an annual basis.

Out west, the event has seen 33 games played throughout the years, with Thursday’s series finale in Prince Albert serving as the 34th meeting between the Western Hockey League and Russia’s National Junior Team.

Of the CHL’s 66 all-time victories against Russia, the WHL can claim 22 of those as their own following Wednesday’s 2-1 victory in overtime.

In the early years of the tournament, it was the WHL owning the head-to-head battles, with eight consecutive victories against Russia before November 28, 2007, when Russia scored a 5-1 victory in Cranbrook, B.C. Russia has come on strong in recent years though, earning splits from each of the past three seasons.

The first-ever game between the two sides featured a strong Team WHL roster. Led by head coach Brent Sutter in Calgary, Cam Ward made 18 saves on 19 shots to earn the 4-1 win while the quartet of goal scorers (Ryan Getzlaf, Jeremy Williams, Josh Gorges, and Nigel Dawes) all went on to play in the National Hockey League throughout their respective careers. The following night in Brandon, Team WHL didn’t hold back, clicking for seven goals on 36 shots in a 7-1 win, led by two goals and three points from future NHLer Dion Phaneuf.

In 2004, Team WHL scored their first of four shutouts in the history of their part in the event. It was a split effort too as Jeff Glass and Rejean Beauchemin combined to stop all 17 shots in Red Deer, Alta. while Eric Fehr and Andrew Ladd each scored twice.

If Team WHL can pull out the win Thursday, it’ll mark the eighth time they’ve swept their two-game set and the first of such occasions since 2015.

Wednesday’s 2-1 win in Saskatoon marked the 10th CIBC Canada Russia Series game in the province of Saskatchewan, with Team WHL holding a 7-2-0-1 all-time record in the province.

For Thursday’s host, the Prince Albert Raiders, their lone game before tonight’s contest was a 2-1 win back in 2008. In that game, Zach Boychuk and Kyle Beach scored for Team WHL while Dustin Tokarski kept the game firmly in control with 22 saves on 23 shots.

With the 2019 CIBC Canada Russia Series coming to a close Thursday, it’s the perfect time to showcase another series-ending win for Team WHL and the CHL.

On Thursday, November 30, 2006, Team WHL and Team Russia heading into Kamloops, B.C. with the shared goal of earning the victory. For Team WHL, it would mean a sweep of the six-game series following a pair of wins by the QMJHL and OHL before Wednesday’s 5-3 win at Prospera Place in Kelowna, B.C. For Russia, they were looking to prevent the sweep and take away some momentum from the six-game set.

Andrey Kiryukhin put Russia on the board first, but Brodie Dupont tied the game up for Team WHL with 4:01 left in the opening period, keeping the teams even through 20 minutes.

In the second, Team WHL came to play as goals from Cody Franson, Dupont’s second of the night, Boychuk, and Darren Helm pushed the home side ahead by a 5-1 score. From the final 20 minutes, Team WHL produced three more goals, with Ryan Russell, Ryan White, and Dupont’s hat-trick goal capping off the game.

Carey Price had a routine night, stopping 22 of 23 shots.

Dupont finished with four points in the game while 14 different Team WHL skaters recorded a point in the game.