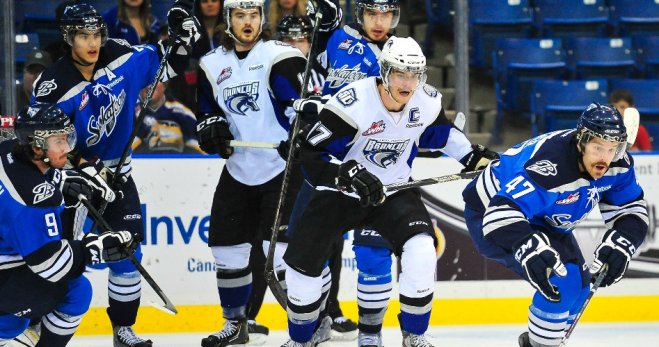 Calgary, AB – The 2012-13 WHL regular season enters its second weekend of play in February with 23 games on the schedule for Friday, Saturday and Sunday.

AROUND THE RINKS THIS WEEKEND…

In Everett, WA, the Silvertips welcome their many season-ticket holders to come Skate with the Team following Sunday’s contest versus the Kelowna Rockets.

In Saskatoon, SK, the Blades will be celebrating the 25th Anniversary of Credit Union Centre on Saturday night when the Lethbridge Hurricanes come to town.  The Blades will be wearing jerseys resembling those that the 1988 edition of the team wore, and former Blades great Wendel Clark will be in attendance as well.

In Swift Current, SK, the Broncos are turning back the clock on Saturday night with their Retro-Themed Jersey Night when the Prince Albert Raiders come to town.  The jerseys will be auctioned off during the game, with proceeds going to the team’s Education Fund.

Petan, a product of Delta, B.C., continued his incredible season through the month of January, netting nine goals and 17 assists for 26 points along with a +11 rating in 13 games to help the Hawks to a 9-2-0-2 record in that span.

Brossoit, a product of Surrey, B.C., recorded a 7-2-0 record with two shutouts in the month of January, and maintained a miniscule 1.35 goals-against average and a solid .957 save percentage in that span.

Makarov, a product of Kazan, Russia, posted a perfect 3-0 record with a shutout in three starts last week, allowing just two goals on 109 shots for a stellar 0.67 goals-against average and a .982 save percentage as the Blades rolled to wins over Brandon, Calgary and Swift Current.

Defenceman Wade Redden will suit up for his 1,000th NHL game on Thursday night in St. Louis, becoming just the sixth Wheat Kings grad to reach that milestone.

The Hillmond, SK, product, who returned to the NHL this season with the Blues after spending the last two years in the AHL, spent three seasons with the Wheat Kings from 1993-96, helping the Wheaties win the 1996 WHL Championship.

Colton Sissons and the Kelowna Rockets take on Ty Rattie and the Portland Winterhawks for a showdown between the top two teams in the WHL on Friday night in Kelowna, B.C.

Friday’s match-up between the Rockets and Winterhawks can be seen live throughout western Canada on SHAW and SHAW Direct channel 299 (7:00pm PST).  The match-up can also be seen on ROOT SPORTS in the Pacific Northwest region (7:00pm PST).

The Rockets are coming off Wednesday’s 5-0 loss to the Chiefs in Spokane for their first regulation defeat since December 16th in Calgary, and currently sit five points behind the Winterhawks for first place in the Western Conference and overall WHL standings.  The Rockets have won 23 straight home games, having not lost since October 10th versus Spokane.  Sissons has 20 goals and 51 points this season.

The Winterhawks suffered a 4-3 setback to the visiting Calgary Hitmen on Wednesday, snapping a six-game winning streak, and currently hold a commanding 24-point lead for first place in the U.S. Division.  The Winterhawks boast the WHL’s best road record at 20-3-1-1 this season.  Rattie got his 30th goal of the season on Wednesday versus the Hitmen, becoming the third Hawks’ player to hit the 30-goal mark this season.

Friday’s clash is the first of back-to-back meetings between the Winterhawks and Rockets in Kelowna.  The teams split the first two meetings in Portland way back in September.

For the complete WHL on SHAW and ROOT SPORTS broadcast schedules, CLICK HERE

Adam Lowry and the Swift Current Broncos take on Michael Ferland and the Saskatoon Blades for a key East Division match-up on Friday night.

The Broncos have been idle since dropping a 4-1 decision to the Blades in Saskatoon last Saturday for their second loss in a row, and currently sit in seventh place in the Eastern Conference – just five points ahead of the ninth-placed Kootenay Ice.  Swift Current managed just one goal over two games last weekend.  Lowry leads the Broncos in scoring with 33 goals and 70 points.

The Blades are coming off a 7-1 win over the visiting Prince Albert Raiders on Wednesday for their sixth consecutive victory, and have closed the gap to just four points on the Raiders for first place in the division.  The Blades’ offense has exploded for 32 goals over the last six games.  Ferland has racked up six goals and 13 points on the team’s current win streak.

Friday’s meeting marks the seventh of eight meetings between the Broncos and Blades this season.  The teams split the first six meetings.

Hunter Shinkaruk and the Medicine Hat Tigers welcome Sam Reinhart and the Kootenay Ice on Sunday for an important Central Division battle.

The Tigers currently hold down the eighth and final playoff spot in the Eastern Conference, but have just a three-point cushion on the Ice in the race for a post-season berth.  The Tigers have lost their last three games, giving up 17 goals in the process.  Shinkaruk needs four more points to hit the 200-point mark for his WHL career, and seven more goals to hit the 100-goal plateau.

The Ice have been idle since last Saturday’s 3-0 shutout win over the visiting Lethbridge Hurricanes that snapped a two-game losing skid, and currently sit in ninth place in the Eastern Conference.  The Ice have posted an impressive 14-3-1 record over their last 18 games to get them back into the playoff race.  Reinhart has recorded at least one point in all 16 games he’s played since the calendar flipped to 2013.

It’s the fourth meeting of the season between the Ice and Tigers.  Kootenay took two of the first three meetings.  The home team has won all three meetings so far.

The Ice host Spokane on Friday and Moose Jaw on Saturday before their Sunday visit to Medicine Hat, while the Tigers host the Warriors on Friday before Sunday’s head-to-head match-up with the Ice.