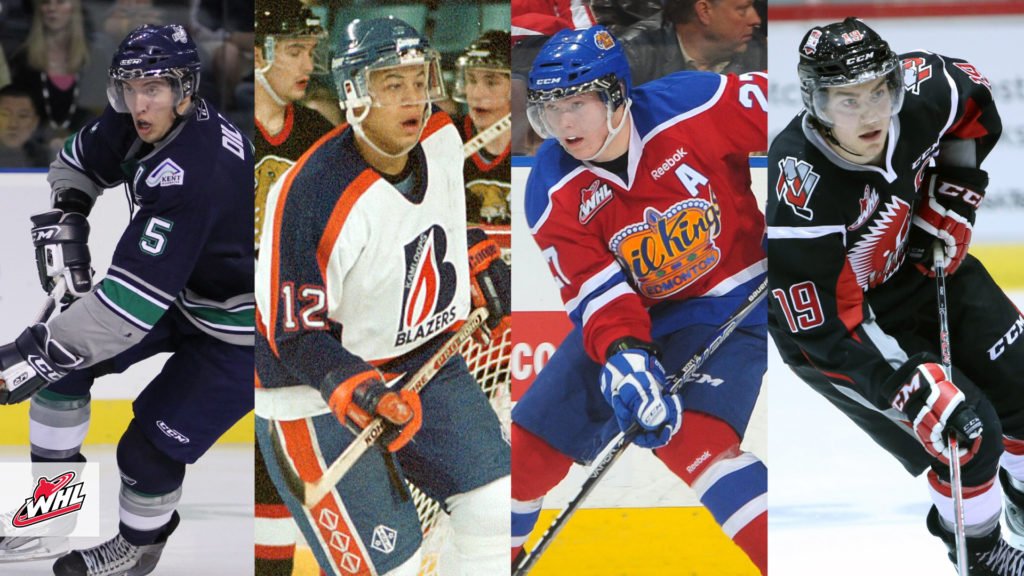 Today marks the 10th anniversary of Canada winning the gold medal in Men’s Hockey at the 2010 Vancouver Winter Olympic Games. While many other WHL Alumni featured on Canada’s roster, it was a pass from former Kamloops Blazers legend Jarome Iginla that set up Sidney Crosby for the overtime winning goal. Iginla had an illustrious NHL career, playing in 1,554 NHL regular season games while tallying 1,300 points (625G-675A). Iginla spent three seasons with the Blazers from 1993 until 1996, notching 236 points (102G-134A) in 183 WHL regular season games. Iginla helped the Blazers to back-to-back WHL Championship and Memorial Cup wins in 1994-95 and was awarded the CHL’s Most Sportsmanlike Player in 1995. In his last year in the WHL, Iginla was awarded the Four Broncos Memorial Trophy for WHL Player of the Year in 1996.

10 years ago today on home soil.

Another point for Point

Well, it's good to know @BraydenPoint19 has INSANE vision. 😳 pic.twitter.com/ao6H1fCY5E

On Thursday night, former Moose Jaw Warriors forward Brayden Point set up sweet goal for the Tampa Bay Lightning against the Chicago Blackhawks. The pass came off Point’s stick so fast, it gave no time for the Chicago goaltender to react, giving Lighting forward Nikita Kucherov an empty net to shoot into. Point, the product of Calgary, Alta., has quietly had another impressive season with Tampa Bay, tallying 60 points (23G-37A) in 60 games this season. The centre spent four seasons in the WHL with the Warriors registering 324 points (134G-190A) in 252 WHL regular season games. Look for the 23-year-old to continue to up his game as the Lightning continue to roll.

Tyler Ennis has enjoyed a career year this season in the NHL. Ennis started the year with the Ottawa Senators, tallying 33 points (14G-19A) in 61 games. Ennis was acquired by his hometown team Edmonton Oilers at the NHL Trade Deadline. Since joining Edmonton, Ennis already has registered two points (1G-1A) in his first two games. While in the WHL, Ennis spent four seasons with the Medicine Hat Tigers, notching 236 points (115G-121A) in 245 WHL regular season games. He was also awarded the Brad Hornung Memorial Trophy for theWHL’s Most Sportsmanlike Player in both 2008 and 2009.

Check out the first goal Ennis scored in an Oilers jersey!

"Just to wear the sweater for the first game was really special."

Brenden Dillon has become a key member of the Washington Capitals, providing solid defensive play as being a big part of the team’s pre-game rituals. Needless to say, the former Seattle Thunderbird defenceman has found a new home in D.C.

Brenden Dillon's (@BDillon04) already got his own @Capitals handshakes. 😂

Dillon spent four seasons with the Thunderbirds from 2007 until 2011. While in the WHL, Dillon registered 94 points (11G-83A) in 280 regular season contests as one of the league premier defensive defenceman. Since transitioning to the NHL, the pride of Surrey, B.C. has played 593 regular season games while notching 114 points (22G-92A).

Our favourite handshake of the bunch is the one below!

Former Edmonton Oil Kings Curtis Lazar picked up a sweet tip-in goal in the Buffalo Sabres win over the Colorado Avalanche on Wednesday. Lazar, the product of Salmon Arm, B.C., has tallied 10 points (5G-5A) in 32 games this season with Buffalo. Prior to transitioning to the NHL, Lazar left his mark in the WHL, helping the Oil Kings to two WHL Championships in 2012 and 2014 while also helping Edmonton Memorial Cup victory in 2014. The versatile forward tallied 169 points (99G-70A) in 199 WHL regular season games and 53 points (28G-25A) in 67 WHL playoff contests. Look for Lazar to make a good case to become a key piece for the Sabres moving forward.

You know @CurtisLazar95 has been practicing those. #WNH

Will Nigel Dawes 🇨🇦 put his name on the #GagarinCup? pic.twitter.com/aQXU594r6O

With the Kontinental Hockey League season coming to a near close, keep your eyes out for WHL Alumni who will take their game to the next level in the 2020 Gagarin Cup Playoffs. Some of the players we recommend you check out are watch for are: