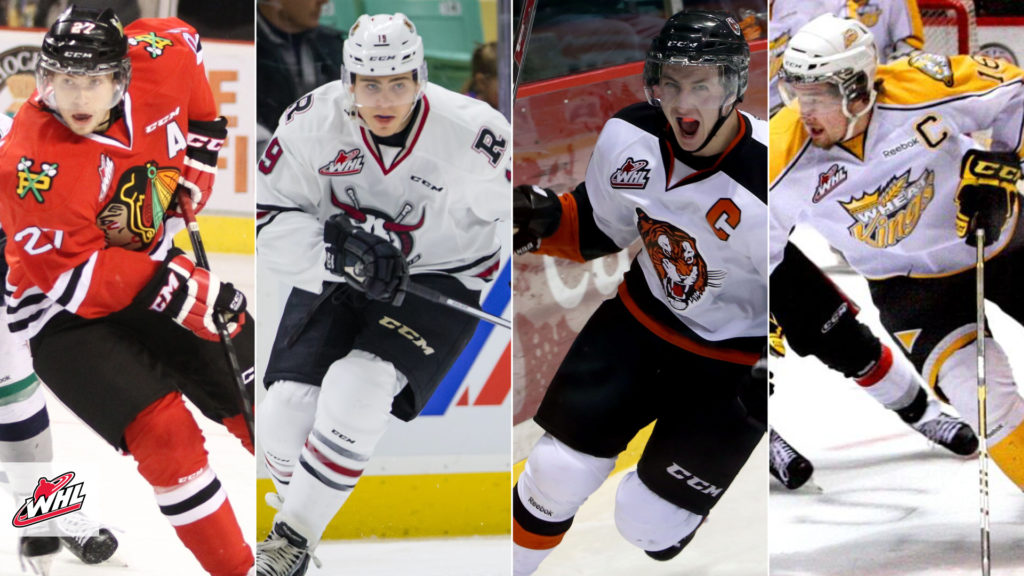 On Tuesday night, former Saskatoon defenceman Mike Green tallied his 500th point in the NHL. Green spent four full seasons in the WHL with the Blades from 2001 until 2005. In that time, the smooth skating offensive defenceman tallied 172 points (37G-135A) in 267 WHL regular season games. Green was picked with the 29th-overall selection in the 2004 NHL Draft by the Washington Capitals.

Congrats Mike on the milestone!

A goal for the @DetroitRedWings Tuesday night marked a milestone point for @GreenLife52. Congrats, Mike! pic.twitter.com/W0KvTU7HxC

Also hitting a milestone was former Kelowna Rockets defenceman Duncan Keith who recorded his 500th assist in the NHL. Keith picked up the assist on the Blackhawks first goal on Tuesday night that tied the game. Keith now just needs one goal for his 100th as well as one point for his 600th in the league. The product of Winnipeg, Man. recently moved into the 10th spot in franchise scoring for Chicago, only 28 points back now of Hubert “Pit” Martin for ninth all time. Look for the Rockets alumni to push for those milestones in the weeks to come.

Since being called up by the San Jose Sharks, former Thunderbirds forward Alexander True has been a bright spot for the team. After joining the Sharks on February 14th, the product of Copenhagen, Denmark has tallied four assists in seven games. Prior to being called up, True tallied 25 points (11G-14A) with the San Jose Barracudas. As the Sharks look to give their younger players ice time, look for True to play a key role for the team in seasons to come. Last week, True got to take on his cousin, Nikolaj Elhers, in the team’s game against the Winnipeg Jets, making for a fun social moment.

Cousins Alex True and Nikolaj Ehlers face off for the first time in the NHL tonight! pic.twitter.com/Ro4F2I1xW1

On Tuesday night, WHL Alumni Chris Phillips had his jersey retired by the Ottawa Senators prior to puck drop against the Buffalo Sabres. Phillips, after being selected with the first-overall pick in the 1996 NHL Draft, played in 1,179 games with Ottawa. On an evening of celebration, the Senators would score seven times in the 7-4 win. In the win, former Tabbies forward Tyler Ennis picked up two assists.

After retiring Chris Phillips’ No. 4 in a pre-game ceremony at Canadian Tire Centre, the @Senators fell behind 2-0 but responded by scoring a season-high seven goals.

Last night the Vegas Golden Knights squared off against the Tampa Bay Lighting. Coming into the game, the Lightning had won 11 straight contests. Tied at 2-2 in the second period, former Wheat Kings forward Mark Stone stepped up to the plate and delivered a sweet goal, giving Vegas the lead. The Golden Knights would hold on to a 5-2 win. Stone, since joining Vegas last season, has tallied 69 points (25G-44G) in 80 regular season games. Look for the product of Winnipeg, Man. to play a big role for the Golden Knights down the stretch.

Give Mark Stone (@MStoner61) a free ride to the net, this is what he'll do. pic.twitter.com/uQWIZtWMFz

Former Winterhawks forward Oliver Bjorkstrand scored a goal last night that left the Columbus Blue Jackets fans puzzled initially. After breaking into the zone and shooting puck up high, everyone though the puck had launched up over the glass out of play. Upon review, Bjorkstrand’s shot beat the Philadelphia Flyers goaltender and was stuck perfectly in the net. What a shot from the WHL Alumni!

DeBrusk has a family moment in Edmonton

Prior to their game against the Edmonton Oilers, WHL Alumni Jake DeBrusk caught up with his dad Louie for an interview. DeBrusk has followed in his father’s footsteps, excelling at the NHL level as a goal scorer for the Boston Bruins. While in the WHL, the product of Edmonton, Alta. tallied 185 points (78G-107A) in 205 regular season contests. Since joining the Bruins, his numbers have steadily improved now in his third full season with the team.

Jake DeBrusk (@JDebrusk) getting interviewed by his dad is the best way to start your day. pic.twitter.com/022A2cyk3i

Clinching the Chemyshev Division in the Kontinental Hockey League (KHL) was Barys Nur-Sultan who got the game winner from former Medicine Hat captain Curtis Valk. This season, the 27-year-old has 18 points (6G-12A) in 51 contests. While in the WHL,Valk had an impressive career, tallying 255 points (125G-130A) in 270 regular season games. His best season for the Tabbies was in 2013-14 when he notched 91 points (47G-45A) in 72 games.