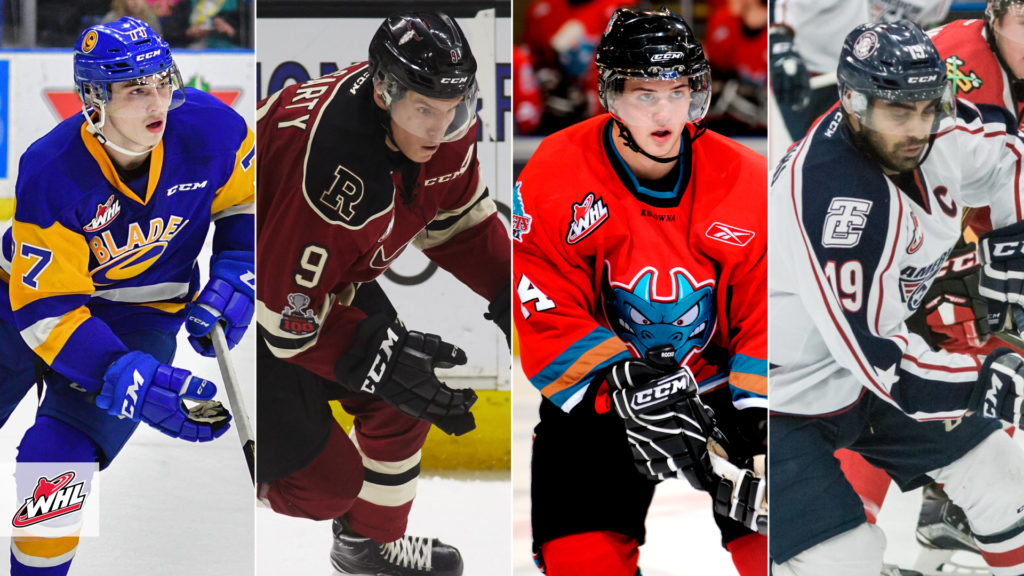 Shooting for the Stars

The Dallas Stars have been one of the hottest teams in the NHL. In the last couple games, the Stars have received elevated scoring support from a duo of WHL Alumni. On Tuesday, Dallas took down the Vancouver Canucks 6-1 on the back of a superstar performance from former Kelowna Rockets forward, Jamie Benn. The power-forward from Victoria, B.C. had a three-point night (2G-1A), burying back-to-back goals in the first and second period to give the Stars a 2-0 lead. Benn spent two seasons with the Rockets, amassing 147 points (79G-68A) in 107 games and also played a big role in the Rockets’ 2009 WHL Championship win.

A big part of the Stars’ run of 12-1-1 in their last 14 games has also been the play of Cochrane, Alta. product, Justin Dowling. The hometown product picked up his first goal in the NHL last week against the Calgary Flames with family and friends in attendance. The game was a great spark for the forward as he now has four points (3G-1A) in 18 games this season. The 29-year-old spent four seasons in the WHL with the Swift Current Broncos, notching 242 points (81G-161A) in 280 games in the league.

After a brief stint with the Rockford IceHogs in the American Hockey League (AHL), Kirby Dach has rapidly transitioned to being a mainstay for the Blackhawks. Dach, the third-overall selection in the 2019 NHL Draft, tied the third longest point streak by an 18-year old in Blackhawks history with seven points (4G-3A) in five games for Chicago. Dach registered 129 points (38G-91A) in 133 games with the Blades between 2016-19. Look for the rookie to make a strong case for the Calder Memorial Trophy this season as the Blackhawks push for a playoff position in the Central Division.

Debut for a former Bronco

Beck Malenstyn set to make his NHL debut, several other player transactions and more news from morning skate ahead of #CapsRangers:https://t.co/7M0NprZ8WG

After spending the last two seasons with the Hershey Bears in the AHL, Beck Malenstyn got the chance to play in his first game in the NHL with the Washington Captials against the New York Rangers. The product of White Rock, B.C. spent four seasons in the WHL split between the Calgary Hitmen and Swift Current Broncos. Malenstyn played a key role in the Broncos WHL championship run in 2018. At only 21-years old, the forward who amassed 128 points (65G-63A) in 238 games in the WHL will look to leave his mark at the next level.

Former Brandon Wheat King forward Toni Rajala scored potentially the biggest goal of his career sending his team to the Champions League quarter-finals. Rajala buried an unbelievable goal walking around the Augsburger Panthers goaltender to win the game in overtime for EHC Biel-Bienne. Rajala spent one season with the Wheaties in 2009-10, notching 63 points (26G-37A) in 60 games. The forward played a key role for Brandon spending the season along side an elite core featuring Mark Stone, Brayden Schenn and Matt Calvert.

The Birds bounce back

Three gents who wore the 'C' in junior.

The UBC Thunderbirds are coming off a dominant weekend with back-to-back wins led by strong play from the team’s 19 WHL Alumni. This weekend was all about former Tri-City Americans captain Tyler Sandhu, who had five points (4G-1A) in the team’s victories. Sandhu spent four years in the league with the Everett Silvertips, Rebels and Americans, playing in 318 games and registering 228 point (90G-138A). On Friday, the forward from Richmond, B.C. potted a hat-trick and followed the performance with a two point game (1G-1A) on Saturday. For his effort, Sandhu picked up second star of the week honours in Canada West.

The University of Toronto Varsity Blues men’s hockey team defeated their most fierce rival this Saturday in a thrilling fast-paced matchup. This win gave the Blues a 3–2 record https://t.co/6MZKaC42EB

The Toronto Varsity Blues are coming off back-to-back wins in recent games against the Guelph Gryphons and York Lions. The Varsity Blues currently sit first in OUA West rankings with a 11-2-0-0 record. Holding down the fort on Toronto’s defensive end is Portland Winterhawks alumni, Josh Hanson. While in the WHL, the Eagles River, Alaska product played in 317 games registering 55 points (5G-50A). Hanson was part of the WHL Championship winning Winterhawks team in 2013.

The Acadia Axemen have come out strong in the AUS, starting the season with an 11-4-0-0 record led by nine WHL Alumni. The WHL is well represented on the team from out east with former Prince Albert Raider Jordy Stallard and Red Deer Rebel Mason McCarty leading the way offensively for the team. Stallard, the Business Administration Major, currently sits third in team scoring with 16 (7G-9A). The 6-foot-2, 187-pound forward spent four seasons in the WHL with the Calgary Hitmen and Raiders, tallying 203 points (85G-118A) in 238 games.

While in the WHL, McCarty spent his time with the Blades and Rebels. The forward from Blackie, Alta. amassed 157 points (85G-72A) in 225 games in the league. His best year was his final season with the Rebels, registering 74 points (38G-36A) in 60 games. In a tough conference with UNB and Saint Mary’s, the Axemen will look to make a push for the team’s first division title in five years.