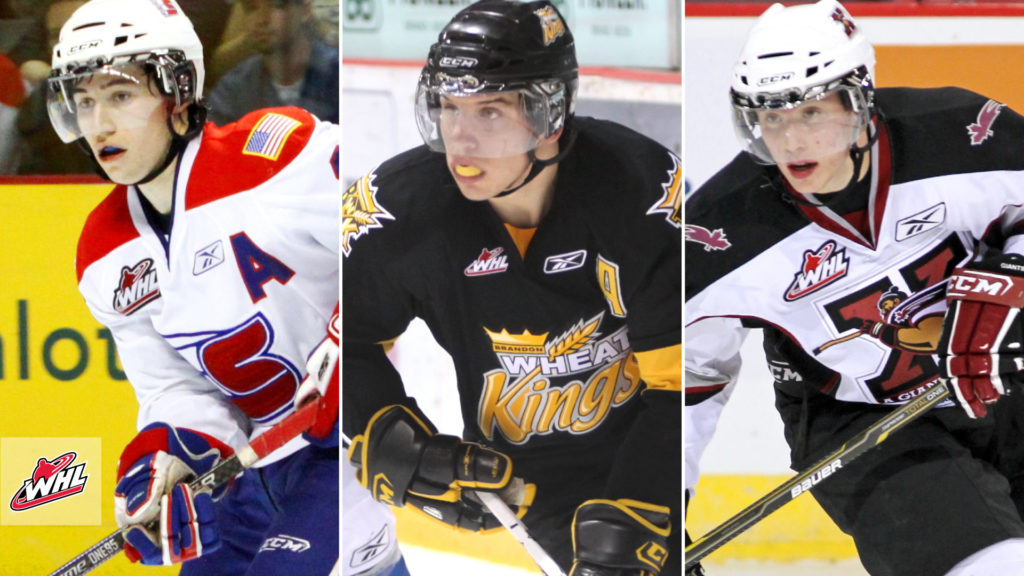 Welcome to Tape to Tape. Each week, we’ll highlight fun social media moments and stories from Western Hockey League graduates around the world! From the National Hockey League to Canada West and professional leagues around the globe, we take a closer look at what WHL Alumni have been up to throughout the season.

The hometown hero that made the show

Tyler Johnson continued his dominant form with the Tampa Bay Lightning against the Carolina Hurricanes on Sunday, October 6 when the former Spokane Chief cannoned home a shot beating Petr Mrázek to tie the game in the first period.

The 5-foot-8, 185-pound winger got his start in the WHL after he was drafted by his home town Chiefs with the 11th-overall selection from the 2005 WHL Bantam Draft. Johnson was an instant impact for the team tallying 42 points (13G-29A) in 69 games in his first season with the Chiefs. The hometown kid played a pivotal role for Spokane that season as the team would bring home the Ed Chynoweth Cup and Johnson took home the WHL Playoffs’ Most Valuable Player award after notching eight-points (5G-3A) in the run. In his last year with the Chiefs, Johnson was named the 2010-2011 Brad Hornung Trophy winner.

After being passed on in the NHL draft, Johnson signed an entry-level deal with the Lightning and the rest is history for the 29-year-old. Johnson is now into his seventh season with the Bolts as part of the teams’ core.

On Saturday, against the Dallas Stars, St. Louis Blues forward Brayden Schenn potted his first goal of the year. The product of Saskatoon, Sask. found the back of the net beating Stars’ goaltender, Ben Bishop to tie the game for the Blues. His team would complete the comeback, winning the game 3-2. Prior to the game, Schenn put pen to paper on a new eight-year deal. The former Brandon Wheat King also played a big role in his team’s win over the Toronto Maple Leafs on Monday night, picking up his second goal of the season. Both of Schenn’s goals would be key in helping lead the Blues to back-to-back comeback victories.

Prior to playing in the NHL, Schenn got his start with the Wheat Kings after being selected ninth overall in the 2006 WHL Bantam Draft. Schenn made an immediate impact for the Wheaties tallying 71 points (28G-43A) in his first season, leading the league in rookie scoring. Schenn would pick up the Jim Piggott Memorial Trophy for rookie of the year and earned a spot on the Canadian Hockey League (CHL) All-Rookie Team.

In total, Schenn tallied 315 points (116G-199A) in 224 games over the course of his WHL career. While playing in the WHL, Schenn also represented Canada on three occasions helping Canada to two silver medals at the 2010 and 2011 World Junior Championships and a gold medal at the IIHF World Under-18 Championships in Kazan, Russia. The 6-foot, 200-pound left-winger was the fifth-overall selection in the 2009 NHL Entry Draft by the Los Angeles Kings and has been a staple in the NHL since. The 28-year-old is now in his 11th season in the NHL and has found a home in St.Louis after spending time with the Philadelphia Flyers and Kings prior too.

On Monday night, former Portland Winterhawk Oliver Bjorkstrand played in his 200th-career NHL game for the Columbus Blue Jackets against the Buffalo Sabres in front of a huge crowd at Nationwide Arena in Columbus, Ohio. Bjorkstrand had a memorable evening scoring his first of the season after he back-banded a shot pasted the Sabres goaltender to give the Jackets the lead. Columbus would go on to win the game 4-3.

The Herning, Denmark prospect played a big role for the Winterhawks in his three years with the team accumulating 290 points (144G-166A) in 193 games in the league. Bjorkstrand had his best offensive season in the 2014-2015 season capturing the Bobby Clarke Trophy for top scoring honours in the league with 118 points (63G-55A).

Bjorkstrand was selected in the third round, 89th overall, at the 2013 NHL Entry Draft by the Columbus Blue Jackets, but after his last season with the Winterhawks, he spent time in the American Hockey League (AHL) with the Lake Erie Monsters. The 6-foot, 177-pound winger would play a large role in the success of the Monsters’ season, helping lead the team to a 2016 Calder Cup win where Bjorkstrand was awarded the Jack A. Butterfield Trophy for the playoffs’ Most Valuable Player. Look for Bjorkstrand to push in the next couple of games as he only needs one point to crack the 100 mark for his NHL career.

Coyotes’ get a howl from NBC

It’s no secret that the Arizona Coyotes bringing back the ‘Kachina’ third jersey was met by popular feedback from fans and players alike. Although Darcy Kuemper’s pads have drawn attention from around the league, it is his play between the pipes that should be drawing attention heading into this season.

This is a look.

Kuemper, an original pick by the Chiefs, was traded to the Red Deer Rebels where he would spend three seasons with the team from 2008-2011. The Saskatoon, Sask. product put up some great numbers in his last season with the Rebels when he won 45 games and kept his goals-against average to only 1.86.

Kuemper would then go on to win the Del Wilson Trophy awarded for the top goaltender in the WHL as well as the being named the 2011 CHL Goaltender of the Year. Last season, Kuemper stepped into the starter’s role for the Coyotes and finished the season with 27 wins and a goals-against average of only 2.33.

It’s no secret Brenden Gallagher has gotten settled in Montreal as the forward heads into his eighth season with the Canadiens. However, Gallagher recently experienced some negative backlash online, not because of his on-ice performance, but because of his skills when it comes to making scrambled eggs.

Gallagher was selected in the ninth-round, 195th overall in the 2007 WHL Bantam Draft by the Vancouver Giants and finished his rookie season with 31 points (10G-21A) in 52 games. In the following season, his numbers would only continue to improve with the team. The 5-foot-9, 187-pound winger would have his best season with the Giants in the 2010-11 season, scoring 91 points (44G-47A) to earn a spot on the WHL West First All-Stars team. The Edmonton, Alta. native was drafted in the fifth round with the 147 selection in the 2010 NHL Entry Draft by the Habs and has been a mainstay for the team ever since, as one of the alternate captains. Over his seven-year NHL career, Gallagher has notched an impressive 294 points (152G-142) in 492 regular-season games.

🚨! NO WAY! WHAT A GOAL! Dominic Zwerger is a superstar! @HCAP1937 pic.twitter.com/MmMEW8touH

WHL Alumni Dominic Zwerger scored a potential goal of the year in the Swiss-A league on Wednesday for the Hockey Club Ambrì Piotta. The former Chief and Everett Silvertip received a breakaway pass and finished the stretch with a beautiful between the legs goal that beat the Lausanne HC goaltender stick side. Zwerger had a successful four seasons in the WHL between 2013 and 2017, tallying 194 points (88G-106A) in 256 games. The Dornbirn, Austria prospect has settled into the Swiss-A league now, improving his stats every year since entering the league.