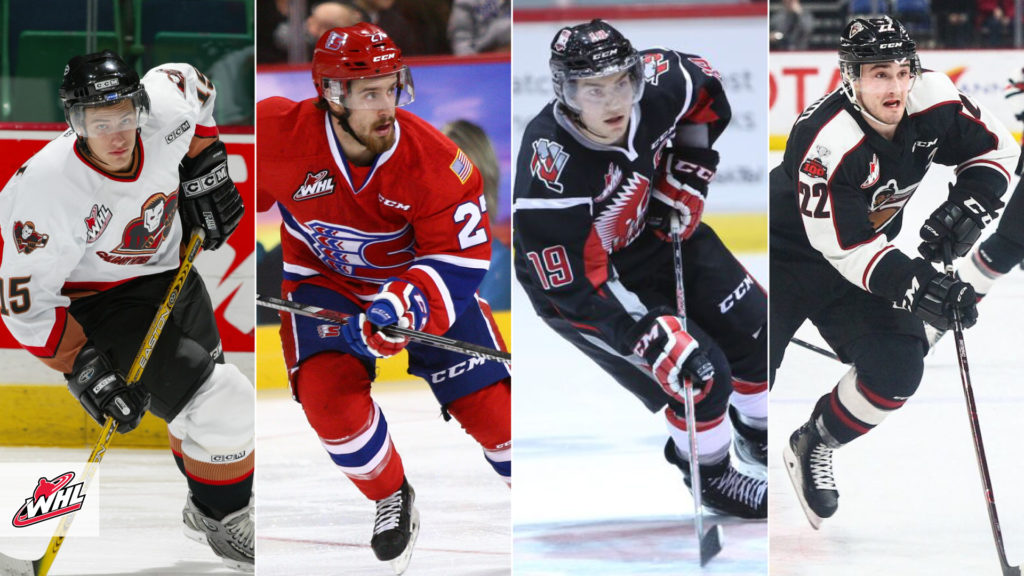 Welcome to Tape-to-Tape. Each week, we’ll highlight fun social media moments and stories from Western Hockey League graduates around the world! From the National Hockey League to Canada West and professional leagues around the globe, we take a closer look at what WHL Alumni have been up to throughout the season.

Starting off this weeks edition off WHL Tape-to-Tape, former Calgary Hitmen centre Ryan Getzlaf played in his 1000th game in the NHL. The product of Regina, Sask. was selected in the third round, 54th overall, in the 2000 WHL Bantam Draft by the Hitmen. The power-forward spent four years with the Hitmen tallying 215 points (95G-120A) in 233 games. Getzlaf was chosen by the Anaheim Ducks with the 19th-overall selection in 2003 NHL Draft where he has spent his entire career.

You won't want to miss this tribute to Ryan Getzlaf, played at @HondaCenter just before the ceremony honoring The Captain for passing 1,000 games. #Getzlaf1000 pic.twitter.com/0tneQ4sEOs

Now in his 15th season with the Ducks, Getzlaf has amassed 934 points (268G-666A) as well as playing a key role in the Ducks Stanley Cup win in 2007. At the international level, he helped lead Canada to Olympic Gold Medals in 2010 and 2014. Getzlaf has had an amazing career and was honoured before his 1000 game by Ducks fans. The next milestone in the 34-year-old’s sights will be the 1000-point mark.

Overseas the WHL has a couple alumni taking part in the NHL Global Series in Stockholm, Sweden. The game matches up the Tampa Bay Lightning with the Buffalo Sabres. The marquee match-up has former Tape-to-Tape feature Sam Reinhart of the Sabres squaring off with former Moose Jaw Warrior Brayden Point.

Reinhart got to celebrate his 24th birthday in Sweden on Wednesday. The West Vancouver, B.C. product and the rest of the Sabres team have released tons of social leading up to the game.

While other players got to try some of Sweden’s tasty treats,  Reinhart and some of the other Sabres have been learning the local language.

How do you think he and his teammates did?

On the other side of the rink will be Point now in his fourth season with the Lightning. The former Warrior is coming off on a career-high 92 points (41G-51A) and has cemented himself as one of next top talents in the league. The forward has already tallied 208 points (95G-113A) in only 239 games in the league. Point spent some time helping a few first-time skaters on Tuesday. The 5-foot-10, 166-pound centre picked up an assist in the 3-2 over the Sabres in the game this afternoon.

The players have landed and so has #nhlpaGnD! Players took to the ice to help a few first-time skaters try hockey with help from the @NHL and brand new equipment through NHLPA Goals & Dreams. #NHLGlobalSeries pic.twitter.com/r3Me9fk6iN

Former Spokane Chiefs forward Tyler Johnson got to experience some of Swedish culture by paying a visit to the Vasa Museum with teammate Yanni Gourde.

700 wins is something to be proud of.

Mike Babcock picked up his 700th career win as a head coach in the NHL. Babcock got his coaching start with the Moose Jaw Warriors and also spent six seasons coaching the Spokane Chiefs between 1994 to 2000. The Manitouwadge, Ont. product now is coaching in his 17th season in the NHL. Babcock helped lead the Detroit Red Wings to the Stanley Cup in the 2008 season and will be looking to recapture the prize with the Toronto Maple Leafs.

"You're a role model for all of us in the league…you're the one carving the path."

As Zdeno Chara gets set for his 1,500th NHL game, fellow captains from around the league offer up congratulations.#Zee1500 | #NHLBruins pic.twitter.com/zInOWe8lTC

Rounding out this weeks NHL recap, WHL Alumni Zdeno Chara of the Boston Bruins played in his 1500th game in the NHL on Tuesday night against the Canadiens at Centre Bell in Montreal, Que. The 42-year-old spent one year with the Prince George Cougars in the 1996-97 season, tallying 22 points (3G-19A) in 49 games. Chara has had an illustrious NHL career winning the Norris Trophy for Best Defenceman in the NHL in the 2008-09 season as well as winning the Stanley Cup in the 2011.

Last weekend in Canada West hockey action the University of Saskatchewan Huskies swept the weekend series against the UBC Thunderbirds. The Huskies have 16 WHL Alumni on the teams roster and have started the season with a steady 5-3-2-0, record sitting fourth in Canada West standings. Leading the team in scoring this season is former Everett Silvertip Carson Stadnyk, who is now in his fourth year with the Huskies. The Business major has registered nine points (6G-3A) in the ten games played for the Huskies this year. Former Vancouver Giants captain Jared Dmytriw potted the overtime winner for the Huskies on Saturday night, capping a 4-3 win. The Craven, Sask. product is in his first year at University of Saskatchewan studying Business.

In U SPORTS action this week, the Brock Badgers defeated the Waterloo Warriors. This year the Badgers have drawn on the leadership of former Regina Pat and Edmonton Oil King Adam Berg. The product of Calgary, Alta., now in his second season at Brock has 22 points (12G-10A) in 37 games with the program. The Social Sciences major is looking to help take the Badgers program to the next level with the team riding a five-game win streak.

The Western Mustangs picked up a big win on Thursday as well after the team defeated the Guelph Gryphons 5-4. The Mustangs have two WHL Alumni helping lead the way for the team with Kolten Olynek and Reed Morison playing key roles. Prior to playing with the Mustangs, Olynek spent four years in the WHL splitting his time primarily between the Lethbridge Hurricanes and Prince Albert Raiders. The Saskatoon, Sask. product registered 77 points (32G-45A) in 253 games in the league. Morison spent his WHL career with the Portland Winterhawks and would finish his time in the league with the Kootenay ICE. The 6-foot-1, 193-pound centre registered eight points (3G-5A) in 75 games in the WHL.

M🏒 Mustangs pick up a 5-4 win in a rare Thursday night game against the Guelph Gryphons.

Ethan Szypula had a goal and two assists while France Sproviero adds 3 assists to his impressive rookie campaign.

They head to Waterloo on Saturday night to take on Laurier#RunWithUs pic.twitter.com/K0gl428Q5l