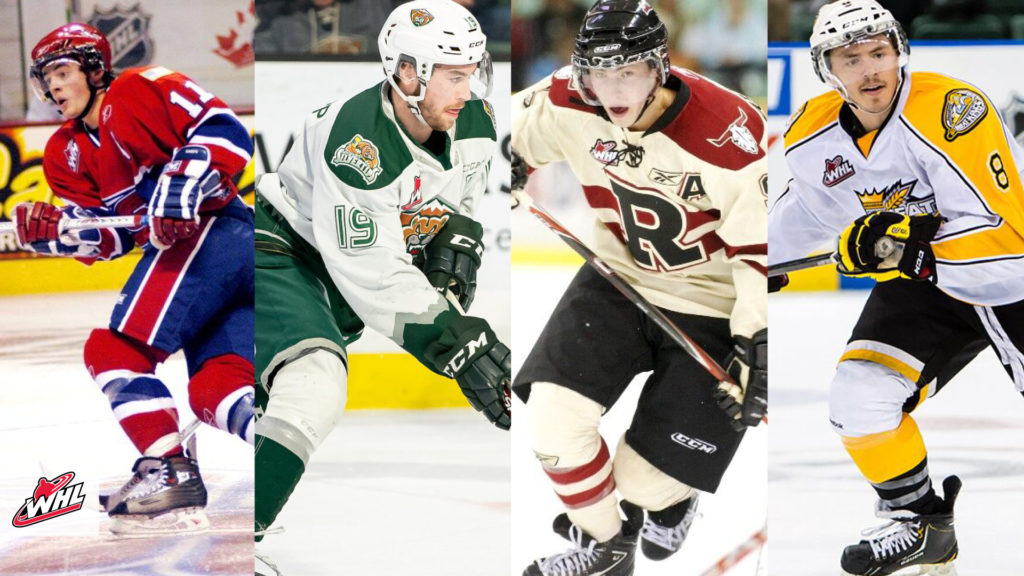 On Tuesday night, former Chiefs forward and University of Alberta graduate, Derek Ryan, played in his 300th game in the NHL, suiting up for the Calgary Flames against the visiting Columbus Blue Jackets. Ryan’s path to the NHL is a memorable story as the forward got his start playing for his local team in the WHL with the Chiefs. After his WHL career concluded in 2007, the forward utilized his WHL Scholarship while also playing for the University of Alberta Golden Bears hockey team in Canada West. After Doc completed his degree in human physiology, he took a shot at playing overseas in the European leagues in Hungary, Austria and Sweden. Ryan got his shot in the NHL with the Carolina Hurricanes organization, spending two seasons with the Charlotte Checkers. Now at 33, Ryan has played in 300 games, tallying 136 points (51G-85A).

Congrats to Doc, who is playing in his 300th NHL game tonight! pic.twitter.com/lIyvwLn3uW

On Tuesday, former Red Deer Rebels forward Ryan Nugent-Hopkins played in his 600th game in the NHL with the Edmonton Oilers. The product of Burnaby, B.C. spent three seasons with the Rebels, tallying 177 points (57G-120A) in 141 WHL regular season games. The eventual first-overall selection by the Oilers at the 2011 NHL Draft was also awarded the Jim Piggott Memorial Trophy for WHL Rookie of the Year in 2010. The forward has spent his full career with the Oilers, appearing in 601 regular season contests while notching 441 points (168G-273A).

Scores a huge one & hits the 20-goal mark for the third-straight season? @NHL game 600 for Nuge was pretty, pretty good. @RNH_93 | #LetsGoOilers pic.twitter.com/19qcvpIxH5

Staying with the Oilers, The NHL announced former Kelowna Rockets and Prince Albert Raiders forward Leon Draisaitl as the NHL First Star of the Month for February. During the month, the product of Cologne, Germany tallied 23 points (10G-13A) in 14 games for Edmonton while also becoming the fastest Oilers player to reach the 100-point milestone since 1990. While in the WHL, Draisaitl notched 216 points (78G-138A) in 160 regular season games. Draisaitl helped the Rockets to a WHL Championship win in 2015 while also being named the WHL Playoffs Most Valuable Player.

⭐Draisaitl concluded February by hitting the 100-point milestone for the second straight season, becoming the fastest @EdmontonOilers player to reach the mark since 1989-90.

Since joining the Chicago Blackhawks, former Saskatoon Blades forward Kirby Dach has impressed in his rookie season. The 19-year-old was selected third overall by the Blackhawks at the 2019 NHL Draft and has been efficient in his first NHL season, registering 22 points (8G-14A) in 61 games. After getting games under his belt, the Blades alumni has showcased his sweet puck-handling ability as one of the exciting younger players in the league. Dach spent two full seasons with Saskatoon, notching 129 points (38G-91A) in 133 WHL regular season games.

Player of the Week for Geekie

The former Tri-City Americans forward has continued his dominant play in the American Hockey League this season, picking up the AHL Player of the Week award on March 2. Over four games, the product of Strathclair, Man. tallied seven points (4G-3A) in four games for the Charlotte Checkers. Geekie concluded the four-game stretch with his first career hat trick as a pro, while also adding an assist, in the Checkers 6-3 win over the Hershey Bears on Sunday.  In his second year in Charlotte, Geekie has 43 points (22G-21A) in 54 games this season.

With seven points in four games, @CheckersHockey forward Morgan Geekie is the @CCMHockey / AHL Player of the Week.

Evason settling in with the Wild

Since being named the interim head coach of the Minnesota Wild, Dean Evason has played a big part in the team’s resurgence as a threat in the Central Division. After being named the interim head coach on February 14, the Wild have gone 7-3-1-0, in their last 11 games and currently sit in the first wild card position in the Western Conference. Evason spent six seasons in the WHL as a head and co-head coach with the Kamloops Blazers (1999-02), Vancouver Giants (2002-04) and Calgary Hitmen (2004-05). His time in the WHL concluded after he joined the Washington Capitals as an assistant coach in 2005. Evason would take his first pro head coaching position with the Milwaukee Admirals in 2012 where he spent six seasons. The product of Flin Flon, Man. joined the Wild as an assistant coach in 2018 and is now seizing the opportunity in his first NHL head coaching position.

“It was really good for our group to compete like that in both ways.”

Making his mark with the Senators

Still looking to get his footing in the NHL, former Wheat Kings forward Jayce Hawryluk took a step in the right direction. The product of Yorkton, Sask. potted his first goal with his new team, the Ottawa Senators, in their 7-3 loss to the Pittsburgh Penguins. Although they fell short, seeing Hawryluk find the score sheet was a bright spot for the team. Hawryluk spent four seasons in the WHL with the Wheat Kings, tallying 278 points (119G-159A) in 232 WHL regular season games. He also played a key part in Brandon’s 2016 WHL Championship win. Look for the 24-year-old to continue to find his footing at the next level.

On Wednesday, a pair of Everett Silvertips players inked their first entry-level contracts in the NHL. Silvertips forward Bryce Kindopp signed his entry-level deal with the Anaheim Ducks. Everett’s captain has 71 points (38G-33A) in 60 games this season. He currently leads the WHL with 11 game-winning goals.

(Put that on a t-shirt and take it to the OC.) Congratulations: RW Bryce Kindopp, 3-year entry level contract with the @AnaheimDucks! #LetsGoTips x #LetsGoDucks

Also inking his first entry-level contract was Silvertips defenceman, Jake Christiansen who signed a three-year deal with the Columbus Blue Jackets. This season, Christiansen is enjoying a break-out year with Everett, tallying 47 points (20G-27A) in 35 games, leading the league in goals by a defenceman with 20.