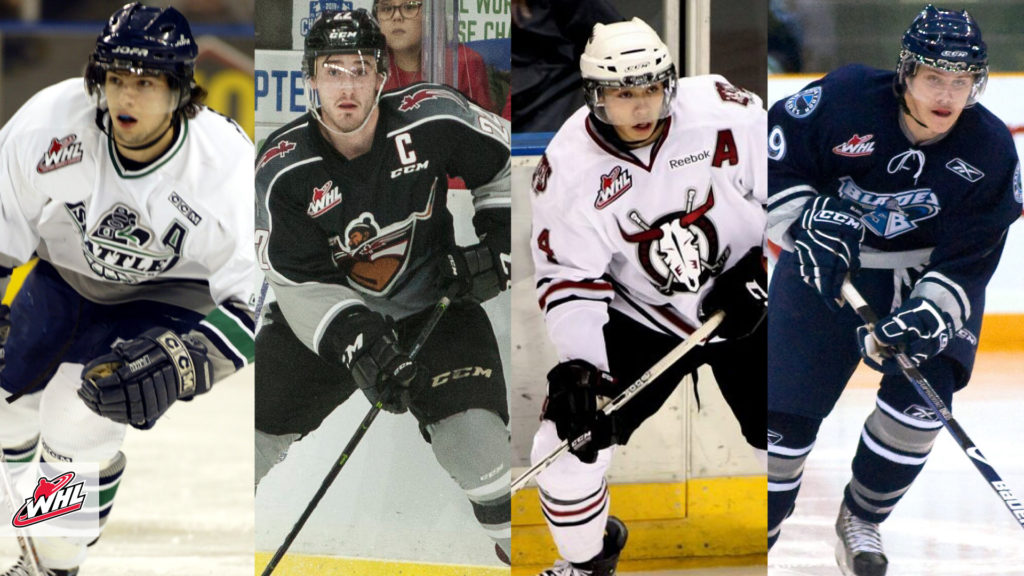 The fastest skater competition was claimed by New York Islanders forward and former Seattle Thunderbirds captain Mathew Barzal. The 22-year-old was rapid off the start and finished the lap with a time of 13.175 seconds, defeating last year’s winner, Edmonton Oilers captain Connor McDavid.

One more look at the @NYIslanders star's fastest lap as your @trulyseltzer Bold Play of the Week. #NHLAllStar pic.twitter.com/vMvdsGr9Mg

Matt Dumba of the Minnesota Wild has been known for having one of the brightest personalities as well as being one of the premier defenceman in the NHL. The product of Regina, Sask. spent four seasons in the WHL split between the Red Deer Rebels and Portland Winterhawks. In his first season with the Rebels, Dumba tallied 26 points (15G-11A) in 62 games including four power-play goals and three game-winning goals. The 17-year-old was awarded the Jim Piggott Memorial Trophy for WHL Rookie of the Year for the breakout season. Now in his sixth season with the Wild, Dumba has become one of the team’s go-to options on the power play while also providing a sound defensive game. Dumba had his mind blown after magician Justin Flom correctly predicted the defenceman’s Google search. The 25-year-old must watch a lot of Friends while on the road.

Bell Let’s Talk day has become one of the most powerful days in the year. With now millions of people continuing the conversation around mental health, various WHL Alumni chimed in to support the initiative online. Dale Weise, the product of Winnipeg, Man., spent three seasons in the WHL with the Swift Current Broncos tallying 112 points (51G-61A) in 167 WHL regular season games. Recently, the 31-year-old just played in his 500th game in the NHL with the Canadiens after spending time with the Vancouver Canucks, Chicago Blackhawks, Philadelphia Flyers & New York Rangers.

Being a good listener, or sometimes even just letting someone you care about know you are there for them, can be the first step in recovery. Today, for #BellLetsTalk Day, take a moment to ask a friend if everything is ok, or what you can do to help. Every action counts. pic.twitter.com/9fYEzDCsOV

Also from the Canadiens, former Thunderbirds forward Nate Thompson opened up about his mental health struggles and how he got through it with the help of friends and family. The 35-year-old has enjoyed a long NHL career and talked about his experience dealing with injuries. The product of Anchorage, Alaska has now played 748 NHL games, registering 151 points (60G-91A). Prior to being drafted by the Boston Bruins in the sixth round, 183rd overall, at the 2003 NHL Draft, Thompson spent three seasons with Seattle, tallying 143 points (55G-88A) in 253 WHL regular season games.

Mental illness can affect anyone, but few people dare to come out of the shadows to ask for help. @CanadiensMTL forward @NateThompson44 shines a light on the importance of talking about mental health and opens up about his own battle with addiction.#HockeyTalks #BellLetsTalk pic.twitter.com/PoEN8QozKj

Now in the third meeting between the Oilers and Calgary Flames this season, the WHL Alumni from both teams stepped up to the occasion on Wednesday night. From the Oilers, the stand-out performances came from Spokane Chiefs alumni Kailer Yamamoto who linked up with Rebels alumni Ryan Nugent-Hopkins on Edmonton’s first marker of the evening. Also finding the score sheet was Rockets and Prince Albert Raiders alumni Leon Draisaitl who drew an assist on the Oilers second goal.

It was the Flames that got the last laugh in the game, taking the contest by a final score of 4-3 in a shootout. Former Vancouver Giants forward Milan Lucic also found the score sheet picking up an assist on Calgary’s first goal. The Flames and Oilers will meet up for the fourth time this season on Saturday night in Calgary.

You love to see it. pic.twitter.com/W4vt2fj6qT

Head over to the Champions Hockey League website now to vote on who you think should bring home the goal of the season honours!

Starting off a heated week of U SPORTS action, the University of Calgary Dinos rattled off back-to-back wins against the University Alberta Golden Bears. Dinos goaltender Brodan Salmond stood tall in U of C’s 5-2 win on Friday, making eight saves in the first, 11 in the second and 10 in the third en route to the win. In the rematch on Saturday, the 5-foot-11, 196-pound goaltender made 28 saves in the Dinos 3-1 win. For his performances, Salmond picked up the Canada West WHL first star of the week.

The product of Calgary, Alta., prior to joining the Dinos,  spent four seasons in the WHL with the Kelowna Rockets and Moose Jaw Warriors. Salmond appeared in 93 WHL regular season games, posting a 49-29-6-2 record, 3.03 goals-against average and a .894 save percentage with five shutouts. Although the Dinos recently dropped the Crowchild Classic game on Wednesday to the Mount Royal Cougars, look for the team to make a final push before the post season.

Picking up the second star of the week was Tanner Nagel of the University of Regina Cougars. Although the Cougars have had an up-and-down season, the play of the former Swift Current Bronco has been a bright spot for the team. Since joining the Cougars, the 22-year-old has potted eight points (4G-4A) in his first eight U SPORTS contests. In the Cougars back-to-back wins last weekend the product of Mossbank, Sask. tallied four points (2G-2A). Nagel was acquired by the Broncos in the 2017-18 season and played a big role for the team in their WHL Championship win.

The University of Saskatchewan Huskies continued their climb up the U SPORTS national rankings ladder as the team took over the second spot in the country from the University off Alberta Golden Bears. Playing a key role in the Huskies win over the UBC Thunderbirds was former ICE forward Levi Cable who picked up two points (1G-1A) in the 3-2 win.

Levi Cable scores a shorthanded goal with 1:17 to give the Huskies the lead and the win!!!@Huskieathletics 3, UBC 2#HuskiePride https://t.co/gbLIGep5pX pic.twitter.com/GgP8khZW1h

On Saturday it was former Giants captain Jared Dmytriw who led the way for the Huskies, picking up two assists in the team’s 5-2 win in the weekend series in Saskatoon.