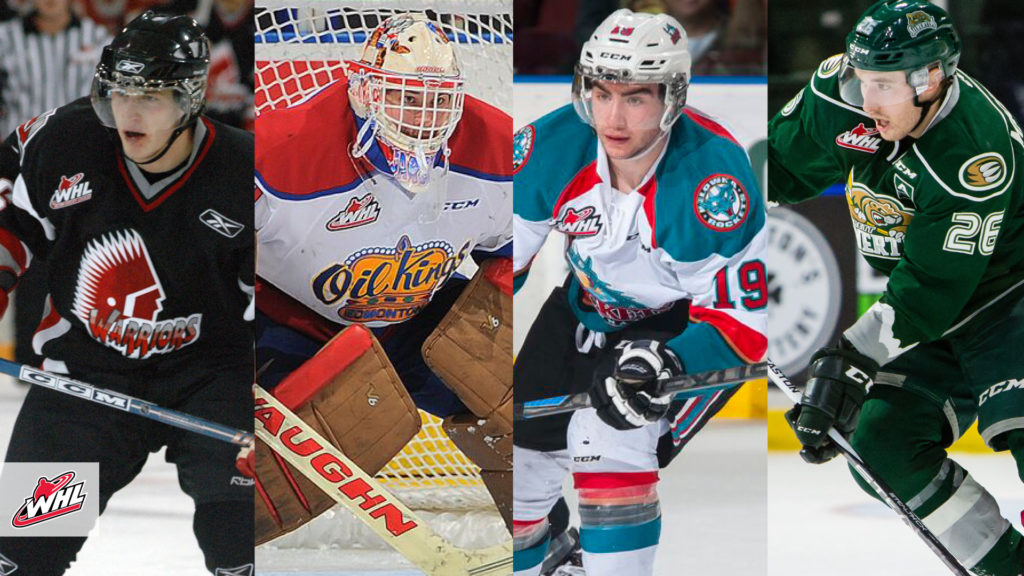 Kicking off the week has been the great play of former Kelowna Rockets forward Dillon Dube. Since being called up by the Calgary Flames, Dube has registered seven points (3G-4A) in his first 11 games. Dube’s best performance came against the Colorado Avalanche potting two points (2A) including an incredible toe-drag and pass to set up the overtime winner.The product of Golden, B.C. was drafted by Calgary in the second round, 56th overall, at the 2016 NHL Draft. Prior to being drafted, the speedy forward spent four seasons with the Rockets, tallying 232 points (101G-131A) in 203 regular season games. The 21-year-old also played a key role in the team’s WHL Championship win in 2015.

The toe drag. The feed. The FINISH!

Jarry of the day

The Pittsburgh Penguins have also been red hot in the last couple weeks and a key part of the team’s success lies with former Edmonton Oil Kings goaltender Tristan Jarry. The product of Surrey, B.C. has been lights out recently for the Penguins picking up back-to-back shutout wins against the St.Louis Blues and Arizona Coyotes. During the streak, Jarry surpassed Tomas Vokoun’s record for longest shutout sequence in the Penguins franchise history. The two wins were enough for Jarry to earn NHL Second Star of the Week honours. Jarry’s form continued against the Columbus Blue Jackets picking up his third shutout in his last four games for the Penguins as the team now sits third in the Metropolitan Division. While with the Oil Kings, Jarry played a huge part in Edmonton’s success, helping the team to two WHL Championships in 2012 and 2014 as well as a Memorial Cup win in 2014. Since joining the Penguins, Jarry has posted a record of 23-13-0-3.

For the Minnesota Wild, getting his NHL debut on Tuesday night was former Lethbridge Hurricanes and Vancouver Giants defenceman Brennan Menell. The product of Woodbury, Min., spent three seasons in the WHL, amassing 145 points (21G-124A) in 196 games. In his last season in the league, the 5-foot-11, 183-pound defenceman registered 71 points (12G-59A) in 70 games with the Hurricanes. After a slow start to the season, the Wild have gone 9-1-4 in the team’s last 14 games, accumulating 22 points since November 4. Look for Menell to try find the scoreboard for his first NHL point as Minnesota looks to continue its stellar play.

Blichfeld gets his shot

On Thursday night, Joachim Blichfeld, the 2018-19 WHL Four Broncos Memorial Trophy for WHL Player of the Year and Bobby Clarke Trophy winner for Top Scorer, got to play in his first game in the NHL for the San Jose Sharks against the New York Rangers. Blichfeld, the product of Frederikshavn, Denmark, is off to a strong start in his professional career with the San Jose Barracuda of the American Hockey League (AHL), registering 19 points (9G-10A) in his first 20 games. Look for the forward to make a push to find the back of the net for his first NHL marker in games to come.

“It’s a dream come true. Think I played this game 100 times in my head, so it’s an unreal feeling to finally happen tonight.” pic.twitter.com/1x7qiuhTSc

Dustin Boyd has taken his game to the next level in the Kontinental Hockey League, now in his ninth season in Russia. The product of Winnipeg, Man. has now played in 422 games in the KHL while notching 254 points (116G-138A), including 10 points (4G-6A) this season with Barys Nur-Sultan. Prior to Boyd’s time playing professionally, the 6-foot-1, 190-pound forward started his career in the WHL with the Moose Jaw Warriors. Boyd spent four seasons with the Warriors registering 217 points (103G-114A) in 265 games. His best season came as Moose Jaw’s assistant captain in 2005-06, tallying 90 points (48G-32A) in 64 games.

Also with Barys Nur-Sultan is former Saskatoon Blades defenceman Darren Dietz, who is in his third season in the KHL. Dietz spent four seasons in the WHL, notching 131 points (48G-83A) in 220 games. Now in the KHL, Dietz has settled in and was awarded the KHL Defenceman of the Year in the 2018-19 season.

Climbing the U SPORTS rankings this week was the University of Calgary Dinos who moved into the eighth seed. The Dinos capped their first half of the season with a weekend sweep over the Regina Cougars. WHL Alumni for the Dinos have led the way in team scoring with former Swift Current Bronco Coda Gordon and former Lethbridge Hurricane Matt Alfaro holding down the top two spots in team scoring. Alfaro, the product of Calgary, Alta., is tied for fourth in the nation in scoring with 26 points (12G-14A). In the Ontario University Athletics (OUA) regional division, Prince George Cougars alumni Brogan O’Brien leads the way in WHL Alumni scoring with 18 points (9G-9A) in 18 games for the third ranked University of Carleton Ravens. Since transitioning to U SPORTS, the Prince George, B.C. product has had a successful career notching, 43 points (20G-23A) in 45 games played over two seasons. Leading the way in the Atlantic University Sports (AUS) division for WHL Alumni is former Everett Silvertips defenceman Cole MacDonald, who sits on 23 points (6G-17A) in 18 games for the StFX X-Men. The 24-year-old product of Wetaskiwin, Alta. is in his fourth season with the X-Men registering 83 points (18G-64A) in 98 U SPORTS contests.