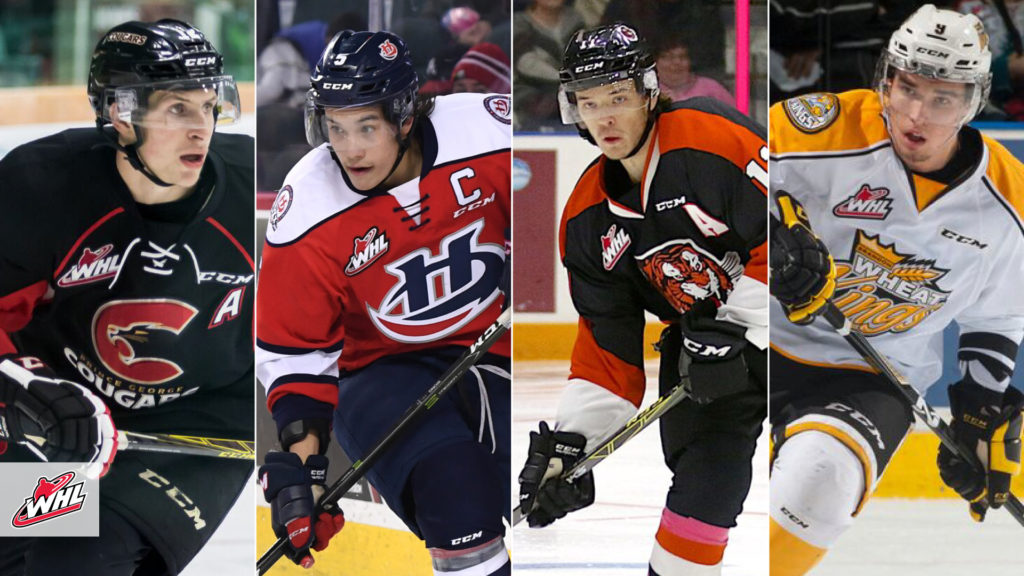 Welcome to Western Hockey League Tape-to-Tape. Each week, we’ll highlight fun social media moments and stories from WHL graduates around the world. From the National Hockey League to Canada West and professional leagues around the globe, we take a closer look at what WHL Alumni have been up to throughout the season.

Moose and former Cougar named AHL Player of the Month

Jansen Harkins had an outstanding month for the Manitoba Moose in the American Hockey League (AHL) and was awarded player of the month honours for November. Harkins, the product of North Vancouver, B.C., finished the month with 24 points (4G-20A) in 15 games. Harkins spent his WHL career with the Prince George Cougars amassing 242 (75G-167A) points in 275 games. Following his best season with the Cougars in 2014-15, Harkins was taken in the second round, 43rd overall, by the Winnipeg Jets at the 2015 NHL Draft. At only 22 years old, the forward is on pace for his best season in the AHL and will be looking to make the next jump to the big league. Harkins is also following in his dad’s footsteps as Todd Harkins spent his time in the NHL with the Hartford Whalers and Calgary Flames.

#MBMoose forward Jansen Harkins has been named the @CCMHockey/@TheAHL Player of the Month for November! He led the league with 24 points (4G, 20A) in 15 games this past month. #GoMooseGo | #Moose20

Last Saturday, the Philadelphia Flyers extended their point streak to six games after former Brandon Wheat Kings defenceman, Ivan Provorov scored an unreal overtime goal against the Montreal Canadians. Provorov, the seventh-overall selection at the 2015 NHL Draft, is off to a great start this season with 18 points (6G-12A) in his first 28 games. Prior joining the Flyers, the product of Yaroslavl, Russia spent two seasons with the Wheaties helping the team to a WHL Championship in 2016 and winning the Bill Hunter Trophy for Top Defenceman of the Year in the same season. In his first season with Brandon, Provorov also recorded the most points by a rookie with 61 points (15G-46A) in 60 games. The 6-foot-1, 200-pound puck-moving defenceman finished his WHL career with an astounding 134 points (36G-98A) in 122 games.

Baby Shark with a big bite

Last Friday Noah Gregor potted his first goal in the NHL for the San Jose Sharks against the visiting Los Angeles Kings. Gregor, the former Prince Albert Raider, scored an unreal goal showing off incredible speed. The Beaumont, Alta. product beat his defenceman on a Hail-Mary pass from WHL Alumni Brenden Dillon then sniped a shot past the Kings goaltender giving the Sharks a 3-0 lead. While in the WHL, Gregor spent time with the Moose Jaw Warriors, Victoria Royals and Raiders, amassing 293 points (129G-164A) in 257 games. The forward’s best season came in 2018-19 with the Raiders, notching 88 points (43G-45A) in the regular season and the team to a WHL Championship.

Tyler Wong is off to a great start in his Kontinental Hockey League (KHL) career with the Kunlun Red Star. In his first season with the team, the former Lethbridge Hurricanes captain has 16 points (8G-8A) in 34 games. On Wednesday, Wong potted his eighth goal of the season, which played an instrumental part in his team’s 4-3 victory over the visiting Spartak Moscow. Prior to joining the KHL, Wong started his career in the WHL spending five seasons with the Hurricanes, posting 298 points (143G-155A) in 317 games. Wong was also a dedicated member in his community and was awarded the Doug Wickenheiser Memorial Trophy for WHL Humanitarian of the Year in 2015 and 2016. The product of Airdrie, Alta. also was awarded the Canadian Hockey League Humanitarian of the Year award in 2016 for his efforts.

Pass from Brule and Tyler Wong scores! Game tied at 3!

McVeigh's third period marker ties it up, as we head to overtime. @HuskieAthletics 1, MRU 1#HuskiePride pic.twitter.com/C9WURRUcVj

In a Canada West match up to finish off the first half of the season, the University of Saskatchewan Huskies defeated the Mount Royal Cougars in back-to-back games last week. After falling behind 1-0 on Friday, the Huskies tied the game on a goal from former Kamloops Blazer Logan McVeigh. The 25-year-old spent four seasons in the WHL and tallied 151 points (55G-96A) in 328 games with Kamloops, Prince Albert, the Medicine Hat Tigers and Regina Pats. Since transitioning to U SPORTS, the product of Kenaston, Sask. has played a huge role for the Huskies and is in the last year of his Bachelor of Agriculture and Bioresources studies.

Flodell picks up athlete of the week

Logan Flodell of the Acadia Axemen picked up U SPORTS Male Athlete of the week recognition for his performances against the UNB Varsity Reds and Moncton Aigles Bleus. On Friday, the former Saskatoon Blades goaltender made 40 saves in a big 3-2 win over the number-one ranked Varsity Reds. The 22-year-old product of Regina, Sask. made 10 saves in the first, 18 saves in the second and 12 in the third, capping the win. Flodell, the Business Administration Major, spent three full seasons in the WHL, playing in 161 games with a record of 86-53-12-1 while posting a 2.92 goals-against average and .908 save percentage. His best year came in the 2017-18 season with the Lethbridge Hurricanes and Swift Current Broncos posting, a record of 38-18-4-0. Now in his second year with the Axemen, Flodell has settled in as the team’s number one.

FINAL | BEARS WIN!
The Golden Bears score three goals in 3:22 late in the second, propelling them to a 5-3 win over the @ubctbirds.

The Bears have now won eight of their last nine games, and lead @CanadaWest with a 13-2-0 record.

Last weekend the University of Alberta Golden Bears picked up the weekend sweep over the UBC Thunderbirds. On Friday, WHL Alumni led the way for the Golden Bears with all five goals coming from former WHL players. Steven Owre, former Medicine Hat Tiger, gave the Bears the lead in the second followed by a marker from former Regina Pat and Tiger, Cole Sanford. While in the WHL, Owre tallied 221 points (74G-147A) in 282 games. The hometown product of Edmonton, Alta. had an outstanding first year in U SPORTS in 2017-18, helping the Golden Bears to a David Johnston University Cup victory and picking up the U SPORTS West Most Outstanding Freshman Trophy. Sanford also had a successful WHL career with 249 points (126G-123A) in 260 games in the league. The 24-year-old has also had a successful career thus far in U SPORTS, registering 89 points (26G-63A) in 87 games.

Owre and Sanford as well as four other Golden Bears players, including former Red Deer Rebels captain Grayson Pawlenchuk, former Kamloops Blazer Ryan Rehill, former Vancouver Giant Trevor Cox and former Tabbies captain Clayton Kirichenko, were all named to the U SPORTS All-Star squad, which will take on Canada’s National Junior Team hopefuls in a pair of games on December 11-12.

GBH 🐻🏒| BREAKING
Six members of the @GBHKY program have been named to the 2019 @USPORTSca All-Star squad!