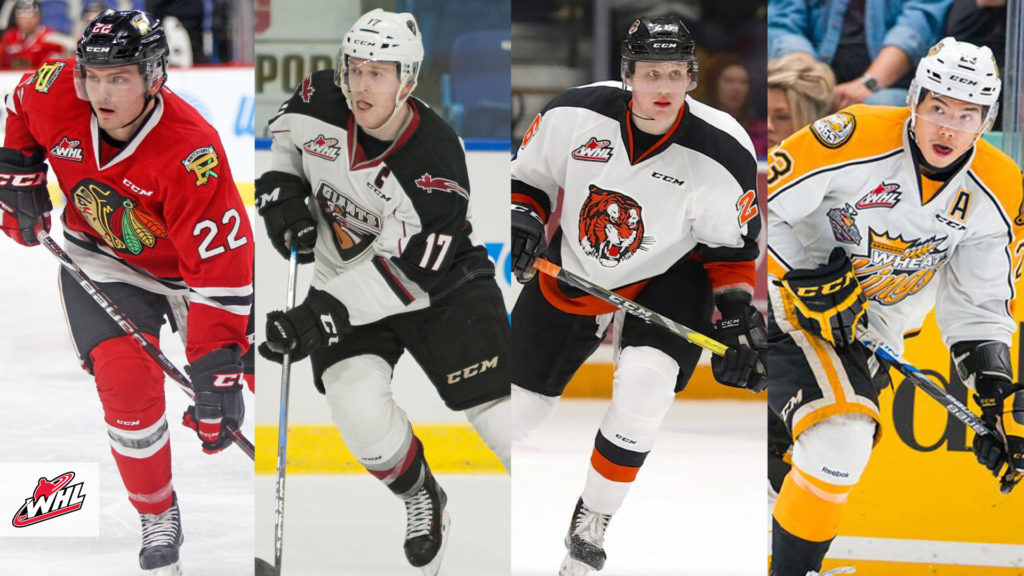 Edmundson Honoured by the Blues

On Tuesday night the Carolina Hurricanes visited the 2019 Stanley Cup Champion St.Louis Blues in a Central versus Metropolitan Division match up. Prior to the game, the Blues honoured former Moose Jaw Warriors and Kamloops Blazers defenceman Joel Edmundson with his Stanley Cup ring. Edmundson, prior to joining Carolina, spent four seasons with the Blues. Edmundson played four seasons in the WHL, tallying 68 points (15G-53A) in 190 regular season games. The product of Brandon, Man. was selected in the second round, 46th overall, at the 2011 NHL Draft and has since cemented himself as one of the NHL’s best defensive defenceman.

On Wednesday, The ECHL named Utah Grizzlies and former Brandon Wheat Kings forward Tim McGauley the ECHL Player of the Month for January. The product of Wilcox, Sask. is the first player to win the award in back-to-back months since Mathieu Roy won the award in back-to-back months in 2012-13. The 24-year-old tallied 19 points (6G-13A) in 24 games in January after notching 25 points (10G-15A) in 12 contests in December. McGauley now sits second in league scoring with 58 points (18G-40A) in 42 games. Prior to going pro, McGauley spent four seasons with the Wheaties, notching 259 points (102G-157A) in 276 WHL regular season games. He also played a key roll for Brandon in their WHL Championship win in 2016.

This week three WHL Alumni got the chance to appear in their first games in the NHL. For the New York Islanders, former Portland Winterhawks left-winger Kieffer Bellows made his NHL debut against the Dallas Stars. The rookie had a great showing, tallying his first NHL point on the game-tying goal from Derick Brassard. Bellows spent one season with the Winterhawks, notching 74 points (41G-33A) in 56 WHL regular season games. Now in his second season with the Bridgeport Sound Tigers in the American Hockey League, the 21-year-old has 24 points (16G-8A) in 45 contests.

On Thursday night, Bellows capped a great week, potting his first and second career goals in the NHL.

Not only did he get his FIRST NHL GOAL tonight, he also got his SECOND! Congrats Kieffer! 🥳🎉

Making his debut for the San Jose Sharks on Wednesday was former Seattle Thunderbirds forward Alexandre True, who made his debut along side teammate Maxim Letunov. As the Sharks’ tweet says, solo laps are better when you have a friend to do them with. True spent three seasons in the WHL with the Thunderbirds, tallying 84 points (45G-39A) in 169 WHL regular season contests. For the product of København, Denmark, he thrived in the WHL playoffs, notching 34 points (20G-14A) in 44 games. True played a key role for Seattle in their 2017 WHL Championship win, notching 22 points (12G-10A) during the playoff run as well as the title-winning goal in overtime.

are better when you get to do them with a friend pic.twitter.com/sr2mvlivaT

Making his debut on Thursday night was former Vancouver Giants captain Tyler Benson for the Edmonton Oilers. The former first overall selection at the 2013 WHL Bantam Draft spent four seasons with the Giants, notching 184 points (61G-123A) in 190 WHL regular season games. The hometown product for the Oilers was selected by the team in the second round, 32nd overall, at the 2016 NHL Draft. In his first full season with the Bakersfield Condors in the American Hockey League (AHL), he tallied 66 points (15G-51A), led AHL rookies in assists and was named to the AHL All-Rookie Team. Look for Benson to leave his mark as the Oilers continue to trend upwards in the NHL rankings.

“It’s been a long road. But it almost makes it more special.”

Also potting his first goal in the NHL was former Prince George Cougars forward, Jansen Harkins of the Winnipeg Jets against the Blues. Harkins finished the night with two points (1G-1A).  Since being called up by the Jets, Harkins has four points (1G-3A) in 15 games. In the tight packed Central Division, look for the forward to help add to an already deep Jets forward core.

First @NHL goal… helmet is all yours @jansenharks26!

The winner of the Champions League Goal of the Season was former Saskatoon Blades forward Curtis Hamilton of the Belfast Giants. The marker played a big role in the Giants first ever win the the Champions Hockey League over Bílí Tygři Liberec. The product of Tacoma, Wash. spent four seasons in the WHL with the Blades, tallying 173 points (67G-106A) in 216 regular season games. Hamilton also won the Spengler Cup with Team Canada in 2018, notching two points (1G-1A) in four contests.

👀Your votes are in – the Best Goal of 2019/20 was scored by @BelfastGiants' Curtis Hamilton! 👏 #ChampionsGoBeyond pic.twitter.com/cotO32UDPK

Rising back up the U SPORTS national rankings this week are the Mount Royal University Cougars, who picked up back-to-back wins over the University of Calgary Dinos. First, the Cougars picked up a big double overtime win against the Dinos at the annual Crowchild Classic game in front of 6,737 fans from both schools. The Cougars followed up the win with another the next night with former Prince Albert Raiders and Kelowna Rockets forward Jesse Lees providing the insurance goal on Friday. Now in his fourth season with the Cougars, the hometown product has tallied 77 points (34G-43A) in 93 U SPORTS contests. The Cougars travel to Vancouver this weekend to take on the UBC Thunderbird sin a very important two-game set on Friday and Saturday.

Also climbing up the U SPORTS national rankings this week is McGill University, who come in at 10th in the nation. Playing a big role for the Redmen this season has been former Spokane Chiefs forward Keanu Yamamoto and Medicine Hat Tigers defenceman Dalton Gally. This year, Yamamoto has tallied 25 points (8G-17A) in 32 contests. McGill claimed the 10 spot after tallying their fourth-straight win. The Redmen have scored 25 goals in their last four contests while only surrendering eight goals against.

Not out of the fight are the Thunderbirds who picked up back-to-back wins over the University of Lethbridge Pronghorns last weekend, improving their record to 8-14-0-4 on the season. Playing a big role in the Thunderbirds 6-1 victory on Friday night was former Kamloops Blazers and Calgary Hitmen forward Jake Kryski. The 21-year-old had a monster five point (3G-2A) contest in the victory that included his first hat-trick in U SPORTS. While in the WHL, Kryski tallied 213 points (78G-135A) in 319 regular season games. Kryski picked up the Canada West WHL First Star of the Week for his performances.