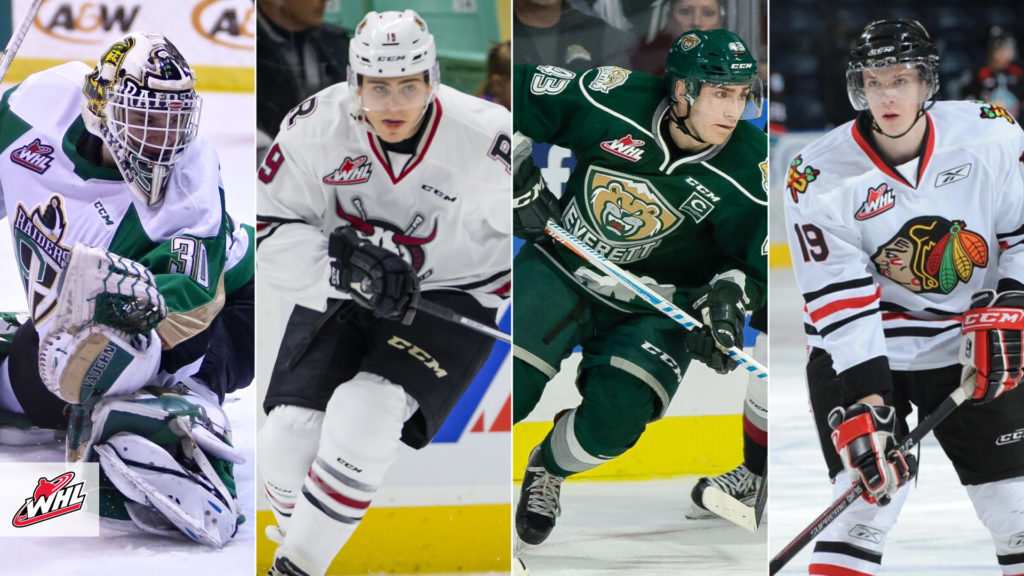 Following in his father’s footsteps

Leading off Tape-to-Tape this week is former Red Deer Rebel and Swift Current Bronco, Jake DeBrusk who has been lights out for the powerhouse Boston Bruins this season. The Edmonton, Alta. product sniped an unreal goal past former Tri-City Americans goaltender Carey Price in the team’s big win on Tuesday night. DeBrusk, the son of NHL great Louie DeBrusk , has become a pivotal piece for the Bruins in his first three seasons with the team registering 94 points (48G-46A) in 157 games. While in the WHL, DeBrusk was efficient in his four seasons, amassing 185 points (78G-107A) in 205 games. After a stellar 2014-15 season with the Broncos, DeBrusk was taken with the 14th-overall selection at the 2015 NHL Draft by the Bruins where he has remained since.

Brick wall on the back end

Riding a six-game win streak, the Stars as talked about last week, have been powered by various WHL Alumni. Last weekend against the Chicago Blackhawks, former Saskatoon Blade back stopper. Anton Khudobin had a game to remember, turning away 38 of 39 shots faced in the team’s 2-1 victory. While with the Blades, the product of Ust-Kamenogorsk, Kazakhstan played 44 games in 2005-06, picking up 23 wins while posting a save percentage of 0.917 and goals-against average of 2.90.

It's been this type of night for Dobby! #CHIvsDAL | #GoStars pic.twitter.com/jIvAakl3Cl

Ryan Johansen potted a goal at 8:23 into the first period in the in the Nashville Predators big 3-2 victory over the St. Louis Blues. The former Portland Winterhawks has quietly had a great start to the year for the Preds with 16 points (4G-12A) in the first 23 games. While with the Winterhawks, Johansen was clinical for the team, finishing his career with 161 points (65G-96A) in only 131 games in the league. Now in his ninth season in the NHL, Johansen is one of the leagues best pass-first centres with already 422 points (134G-288A) in 615 games played in the NHL between the Predators and Columbus Blue Jackets.

Also finding the net this last week was former Everett Silvertips captain, Connor Dewar for the Iowa Wild in the American Hockey League (AHL). Dewar, in his first season with the Wild, is finding his feet at the next level and has three points (2G-1A) in his first ten games in the league. Goal scoring isn’t something new for The Pas, Man. product as he was a clinical scorer while in the WHL, finding the score board for 197 points (99G-98A) in 270 regular season games. The 5-foot-10 forward’s best season was his last as a Silvertip registering 81 points (36G-45A) in only 59 games. Dewar made the WHL West First All-Star team at the end of the 2018-19 season. At only 20-years-old, look for the centre to take his game to the next level for the Wild.

In the Overseas Spotlight this week is former Calgary Hitmen and Tri-City Americans forward, Brooks Macek of Yekaterinburg Automobilist in the Kontinental Hockey League (KHL). This week, the forward picked up two goals in his team’s loss to Torpedo Nizhny Novgorod. In his first season in the KHL, Macek has been clinical for his team leading the way with 24 points (11G-13A) in his first 31 games. The 27-year-old from Winnipeg, Man. has played alongside WHL Alumni Nigel Dawes who is now in his ninth-season in the league. While in the WHL, Macek was efficient registering 256 points (88G-168A) in 319 games. His best season with the Hitmen netting 80 points (32G-48A) in 70 games during the 2012-13 WHL Regular Season. Look for the 5-foot-11, 192-pound wing player to continue to leave his mark on the league this year.

Reds roll to number one

8-1 Win over St.Fx at the AUC. Goal scorers were: Anderson (2), Goulet, McEwan, Watling, Simpson, Cooper and Watling. Thanks to all the fans who attended the 1st half games! Big week ahead!!

Moving up the power rankings this week in U SPORTS action were the University of New Brunswick Varsity Reds who claimed the number one spot from the University of Alberta Golden Bears. Leading the way for the Reds this season has been a trio of WHL Alumni from the Medicine Hat Tigers, Kamloops Blazers and Prince Albert Raiders. In net for the Reds is Rylan Parenteau posting an impressive record of 5-1-0-0 to start the season. Prior to joining UNB, the 23-year-old spent three seasons in the WHL between Prince Albert and Tri-City. His best season came in the 2015-16 season with the Raiders, winning 25 games while posting a 2.82 GAA and a 0.913 SV%. In his third season now with the Reds, Parenteau has played a big part in the team’s back-to-back AUS Championships and backstopping the team to a David Johnston University Cup victory in 2019.

Also playing key roles for the team are former Medicine Hat Tigers captain Mark Rassel and former Kamloops Blazers assistant captain, Joe Gatenby. Rassell spent four seasons with the Tabbies, notching 181 points (103G-78A) in 274 games in the league. In Rassel’s first season with the Reds, he tallied 29 points (13G-16A) in 30 games and also made the AUS All-Rookie team for his efforts. Defensively, the Reds have found a leader on the back end in Joe Gatenby. The product of Kelowna, B.C. spent five seasons in the WHL split between his hometown Kelowna Rockets and the Blazers. One of Gatenby’s highlights in the league was winning a WHL Championship with the Rockets in 2015. The two-way defenceman registered 141 points (25G-114A) in 317 games and has effectively translated his game at the U SPORTS level.

Ravens remain at the three spot

The Carleton University Ravens remained at the number three spot this week in U SPORTS rankings. The team has attributed much of the success to the eight WHL Alumni found on the roster. Leading the way offensively this year for the Ravens is former Prince George Cougars forward Brogan O’Brien. While in the WHL, O’Brien spent three seasons with the Cougars amassing 130 points (44G-86A) in 190 games. Since transitioning to U SPORTS, O’Brien has been close to a point-per-game player with 41 points (19G-22A) in his first 43 games in the league. Also putting up offensive numbers is former Victoria Royals, Cougars and Raiders forward Kody McDonald who, in his first season with the Ravens, has nine points (3G-6A) in 14 games. McDonald, the product of Lethbridge, Alta. spent five years in the WHL putting up 198 points (95G-103A) in 323 games in the league.

Last weekend the University of Manitoba Bisons played back-to-back games  against the Canada West-leading University of Alberta Golden Bears. After dropping the game on Friday, the Bisons bounced back and picked up a big 5-3 win on Saturday. Former Everett Silvertip Lucas Skrumeda and former Winterhawk Adam Henry both contributed in the team’s victory. Henry picked up an assist on the second Bisons goal in the first period and Skrumeda notched a goal at 13:25 into the second period. With the win, the Bisons moved up the rankings to fifth in Canada West.