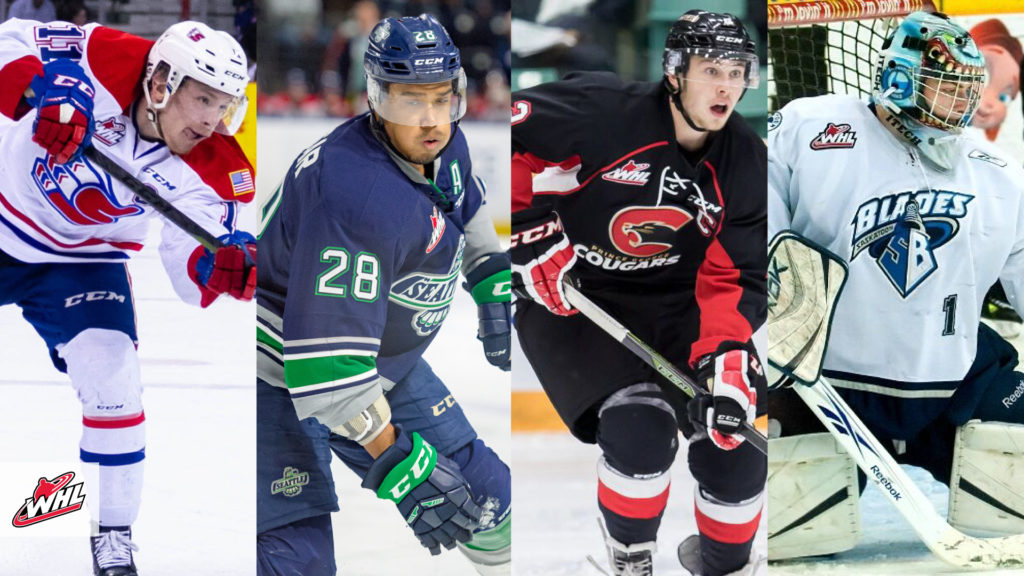 In the last two weeks, two players from the Vegas Golden Knights made premier appearances for the team. First on January 4, Chandler Stephenson scored an overtime winner to remember against the visiting St. Louis Blues.

Since joining the team after being acquired from the Washington Capitals, the former Regina Pats centre has stepped into a key role for the team. Since The 25-year-old has registered 10 points (5G-5A) in his first 19 games with the Golden Knights. Staying with the Golden Knights former Seattle Thunderbirds forward, Keegan Kolesar got his NHL debut on Saturday, January 11 against the visiting Columbus Blue Jackets.

Kolesar spent four seasons in the WHL with Seattle playing in 243 regular season games with the Thunderbirds, notching 167 points (77G-90A) including 25 power-play goals and 11 game-winning goals.  The 22-year-old played a key role for Seattle in the team’s 2017 WHL Championship win. Kolesar, the product of Winnipeg, Man., was selected in the third round, 69th-overall, by the Columbus at the 2015 NHL Draft. Last season, Kolesar spent the year in the American Hockey League (AHL) with the Chicago Wolves, notching 36 points (20G-16A) in 74 games. Look for the 6-foot-2, 223-pound forward to continue to make a name for himself in at the next level!

One for the records

On Monday former Tri-City Americans goaltender Carey Price recorded his 46th career shutout, tying Ken Dryden for third all-time among Montreal Canadiens goaltenders. The 32-year-old goaltender spent four seasons with the Americans between 2003-07 playing in 193 regular season games. The product of Vancouver, B.C. posted a record of 83-74-9-3 while also recording 15 shutouts. Price was awarded the Del Wilson Memorial Trophy for the Top Goaltender in the WHL in 2007. After the 2015 season Price cleaned house at the NHL awards winning the Vezina Memorial Trophy for the Top Goaltender in the NHL while also winning the Hart Memorial and Ted Lindsay Memorial Awards for the Most Valuable player voted by the NHLPA. All time, Price posts a record of 339-224-72 in 662 NHL regular season games played.

With his 46th shutout, Carey Price ties Ken Dryden for 3rd in that category as a Hab.

In his first year with the Ontario Reign in the AHL, former Spokane Chiefs captain, Jaret Anderson-Dolan has settled in with the team this season. The centre spent four seasons with Spokane playing in 244 regular season games with the team notching 236 points (113G-123A) including 42 power-play markers and 16 game-winning goals. The product of Calgary, Alta. was selected in the second round, 41st overall, by the Los Angeles Kings at the 2017 NHL Draft and will look to be a key piece for the Kings organization moving forward. This year the 20-year-old has played in 36 games for the Ontario Reign and has notched 19 points (5G-14A).

Save of the decade

On Wednesday NHL.com voting concluded and former Saskatoon Blades goaltender, Braden Holtby was awarded the save of the decade for his big stop against the Golden Knights in the 2018 Stanley Cup Final. Just watch the video below to show what role the save had in turning the series around of the Capitals.

The @NHLdotcom staff has spoken! Braden Holtby's (@Holts170) stop in the 2018 Stanley Cup Final is the Save of the Decade. 🙌

Who will make the All-Decade Team? Find out Friday, January 24 at 6:30 ET on @NHLonNBCSports. pic.twitter.com/m89GkB8vGr

The 30-year-old now in his eighth full season in the NHL was drafted by the Capitals in the fourth round, 93rd overall, at the 2008 NHL Draft. Holtby has cemented himself as one of  the elite goaltenders in the league after winning the Vezina Memorial Trophy in 2015. The following season the product of Lloydminster, Sask. won the Jennings Memorial Trophy for the Lowest Goals-Against Average in the league and led the NHL in wins with 42. Holtby capped his amazing three-year run playing a vital role in the Capitals 2018 Stanley Cup win. He spent four seasons with the Saskatoon Blades, playing in 177 WHL regular season games posting a record of 82-75-6-9 with seven shutout wins.

Two WHL Alumni are set to gear up for the 2020 FONBET Kontinential Hockey League (KHL) All-Star Game. Lacing up for the Kharlamov Division is former Kootenay ICE captain Nigel Dawes. The 34-year-old played in 245 regular season games in the WHL notching 272 points (159G-113A). He was also awarded the Brad Hornung Memorial Trophy for the WHL’s Most Sportsmanlike player in 2004. Dawes has tallied 448 points (241G-207A) in 481 regular season games in the KHL since joining the league. Joining the product of Winnipeg,Man. will be former Saskatoon Blades defenceman Darren Dietz who will play for the Chernyshev Division team. Dietz played in 220 regular season games in the WHL and registered 131 points (48G-83A). Now in his third season in the KHL the 26-year-old has 98 points (31G-67A) in 149 games.

As the second half of the U SPORTS men’s hockey season kicks off let’s take a look at the WHL Alumni leading their teams.

In the Canada West Division, the University of Alberta Golden Bears and University of Saskatchewan Huskies continue to battle at the top of the standings as the team’s sit in the two and four spots respectively in the national rankings. This past weekend the Golden Bears swept the Mount Royal Cougars in a home-and-home series. Former Regina Pats forward, Cole Sanford led the way for U of A notching six points (4G-2A) in the weekend series. This season, the 24-year-old now has 20 points (7G-13A) in 20 games. Sanford was awarded the Canada West first star of the week for his efforts.

The Huskies also picked up a weekend sweep over the University of Lethbridge Pronghorns in a two-game series. On Friday, former Prince George Cougars captain Sam Ruopp was the player of the game for the Huskies notching two points (1G-1A) in Saskatchewan’s 5-2 win. Now in his third season with the Huskies, the four-year WHL Alumni has settled in with U SPORTS play and has registered 30 points (10G-20A) in 55 contests in the league.

Still holding down the number-one spot in the nation are the UNB Varsity Reds who have dominated the Atlantic University Sports (AUS) Division. On Tuesday, the Reds continued to roll as the team rolled to a 3-1 victory over the University of Prince Edward Island. Picking up the win was former Tri-City Americans and Prince Albert Raiders goaltender, Rylan Parenteau who notched his 12th win of the season. Parenteau will look to continue to play a crucial role for UNB as the team looks to repeat as U SPORTS University Champions.

Some action pics of last nights 3-1 W on the island.

Leading the way in the Ontario University Athletics East Division are the Carleton Ravens with a record of 18-3-0-1. This week the Ravens moved up to the number-five spot in the nation behind the Huskies after wins against the Queens Golden Gaels and  University of Concordia Stingers.  Second in team scoring for the Ravens is former Cougars forward Brogan O’Brien who spent three seasons in the WHL notching 130 points (44G-86A) in 193 games. This season the Prince George, B.C. product has 19 points (9G-10A) in 22 games.