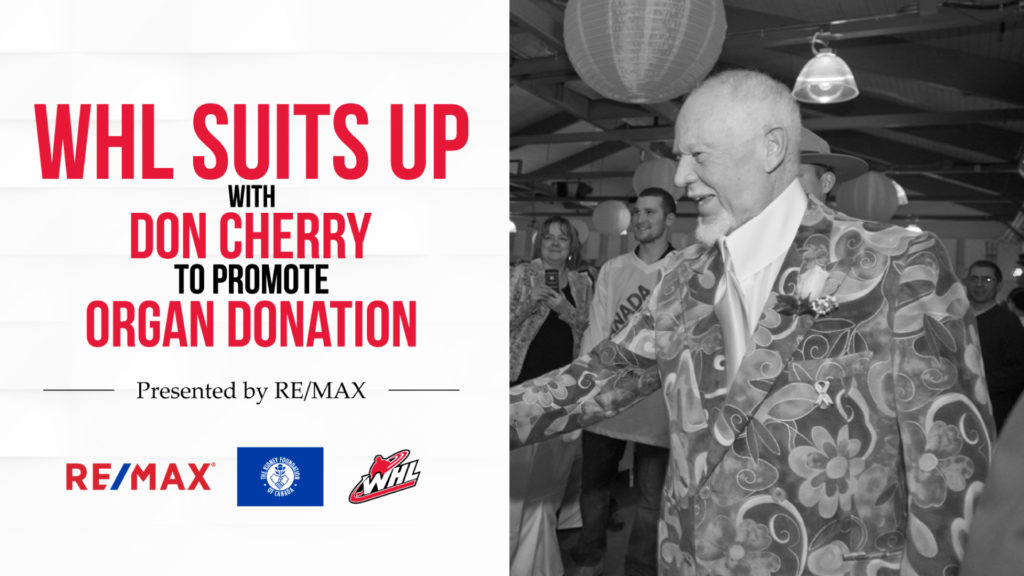 Calgary, Alta. – The Western Hockey League is proud to partner with RE/MAX to present WHL Suits Up with Don Cherry to Promote Organ Donation – Presented by RE/MAX – a series of events across WHL markets to promote the importance of organ donation and to generate further support of The Kidney Foundation of Canada.

During the months of October and March, WHL Clubs in 17 Canadian markets will play host to their very own WHL Suits Up with Don Cherry to Promote Organ Donation – Presented by RE/MAX theme night, complete with a variety of special promotions for fans in attendance. The first 1,000 fans in attendance will receive a special-edition Don Cherry bobblehead and while other fans will receive a limited-edition Don Cherry trading card, courtesy of Upper Deck.

“Thanks to our longstanding WHL sponsor RE/MAX, we are proud to partner with Don Cherry and his family in promoting organ donation and support for local Kidney Foundations,” commented WHL Commissioner Ron Robison. “Our WHL markets in Western Canada provide an ideal venue to promote important causes such as this and we look forward to working with our friends at RE/MAX to raise further awareness of the importance of organ donation.”

On the ice, WHL Clubs will sport their own unique and specially-designed Don Cherry-themed uniforms. Fans will have the opportunity to bid on the limited-edition jerseys, with 100 per cent of the proceeds going to local chapters of The Kidney Foundation. In addition to game-worn uniforms, fans will have the chance to bid on one Don Cherry-autographed jersey in each participating WHL market.

“Creating awareness surrounding the importance of organ donation in Canada is both close to my heart and paramount to helping people across this beautiful country of ours,” said Cindy Cherry, daughter of Don Cherry and Fund Development & Marketing Associate for The Kidney Foundation of Canada. “It makes you wonder why everyone hasn’t registered to be an organ donor like I have. I’m grateful to both the Western Hockey League and RE/MAX for coming together on this important initiative in support of The Kidney Foundation of Canada.”

The Kidney Foundation is a cause close to the Cherry family as Don’s son, Tim, received a kidney transplant from his sister Cindy. With close to 4,500 Canadians awaiting organ donation today – 76 per cent whom require a kidney – the Cherry family, RE/MAX and the WHL have come together to create the WHL Suits Up with Don Cherry to Promote Organ Donation – Presented by RE/MAX awareness campaign in support of The Kidney Foundation.

“RE/MAX of Western Canada is excited to partner with the Cherry Family  and the WHL to help promote the importance of organ donation,” said Elton Ash, Regional Executive Vice President, RE/MAX of Western Canada. “These themed games will be fun for fans, and will help generate support for The Kidney Foundation of Canada.”

During the month of October, WHL Suits Up with Don Cherry to Promote Organ Donation – Presented by RE/MAX will be hosted in the following WHL markets: Brandon, Calgary, Kootenay, Lethbridge, Moose Jaw, Prince Albert, Regina and Vancouver.

During the month of March, WHL Suits Up with Don Cherry to Promote Organ Donation – Presented by RE/MAX will be hosted in the following WHL markets: Edmonton, Kamloops, Kelowna, Prince George, Red Deer, Saskatoon, Swift Current, Victoria and Medicine Hat.

Regarded as the world’s finest development league for junior hockey players, the Western Hockey League (WHL) head office is based in Calgary, Alberta. The WHL consists of 22 member Clubs with 17 located in Western Canada and five in the U.S. Pacific Northwest. A member of the Canadian Hockey League, the WHL has been a leading supplier of talent for the National Hockey League for over 50 years. The WHL is also the leading provider of hockey scholarships with over 375 graduates each year receiving WHL Scholarships to pursue a post-secondary education of their choice. Each season, WHL players also form the nucleus of Canada’s National Junior Hockey Team.

About The Kidney Foundation

The Kidney Foundation of Canada exists for the enhancement of kidney health, reducing the burden of kidney disease, and a cure. Since 1964, The Kidney Foundation of Canada has contributed over $115 million to medical research to ensure that treatment options and patient results continuously improve, and that effective provincial and federal policies and strategies exist for kidney research, kidney care, organ donation, and transplantation.

About RE/MAX of Western Canada

RE/MAX was founded in 1973 by Dave and Gail Liniger, with an innovative, entrepreneurial culture affording its agents and franchisees the flexibility to operate their businesses with great independence. Over 110,000 agents provide RE/MAX a global reach of more than 100 countries and territories. RE/MAX is Canada’s leading real estate organization with more than 19,000 Sales Associates and over 750 independently-owned and operated offices nationwide. RE/MAX, LLC, one of the world’s leading franchisors of real estate brokerage services, is a subsidiary of RE/MAX Holdings, Inc. (NYSE:RMAX). With a passion for the communities in which its agents live and work, RE/MAX is proud to have raised more than $150 million for Children’s Miracle Network Hospitals® and other charities. For more information about RE/MAX, to search home listings or find an agent in your community, please visit www.remax.ca.