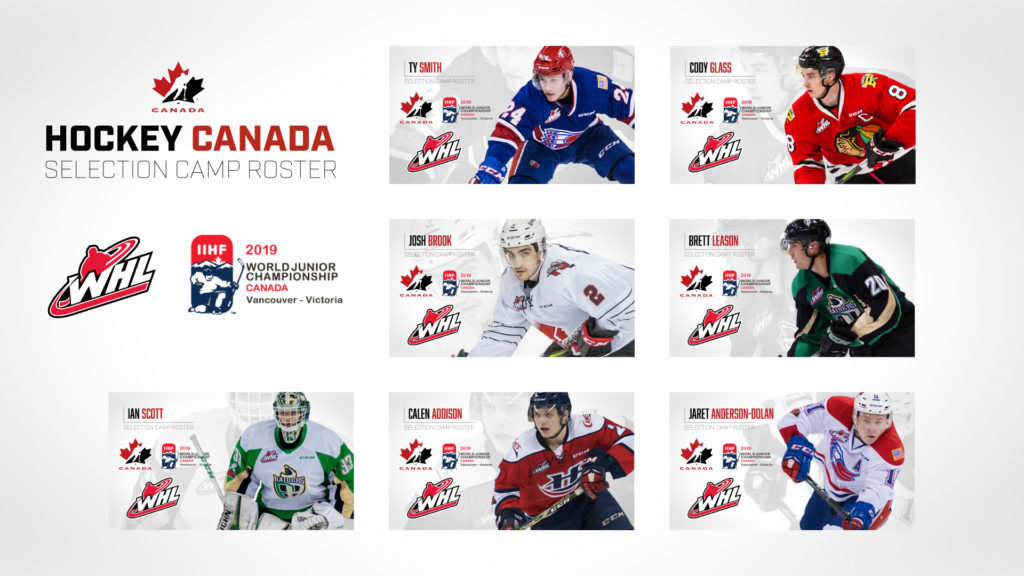 Calgary, Alta. – The Western Hockey League is proud to announce today seven WHL players have been named to Hockey Canada’s National Junior Team Selection Camp in Victoria, B.C., from December 12 to 14. Hockey Canada announced the names of 34 players set to attend the selection camp at a press conference Monday morning.

“Our evaluation process through summer camp, the CHL season, Canada-Russia Series and now selection camp allows us to assess and assemble the top Canadian players to represent our country,” said Shawn Bullock, Hockey Canada’s director of men’s national teams. “Our final decisions will be difficult ones, but we couldn’t be more excited to gather in Victoria and begin the road to representing Canada in Vancouver.”

Canada’s National Junior Team Sport Chek Selection Camp will take place at the Q Centre in Victoria, B.C., and will feature a three-game series against a team of U SPORTS all-stars from December 12 to 14. Tickets are $15 plus fees and are available at HockeyCanada.ca/Tickets, as well as at the Q Centre and Save-On-Foods Memorial Centre box offices.

Road to the World Juniors

Following selection camp, the Canadian squad will be pared down to the final 22 players who will proudly wear the Maple Leaf at the 2019 IIHF World Junior Championship in Vancouver from December 26 to January 5, as they look to win Canada’s 19th World Juniors gold medal.

Canada’s final preparations include games against Switzerland, Slovakia and Finland as part of the Road to the World Juniors pre-tournament schedule. Nine communities across B.C. will play host to 12 games, featuring all 10 competing teams, from December 18 to 23.

For more information on Hockey Canada, Canada’s National Junior Team and the 2019 IIHF World Junior Championship, please visit HockeyCanada.ca, or follow along through social media on Facebook, Twitter and #WorldJuniors.