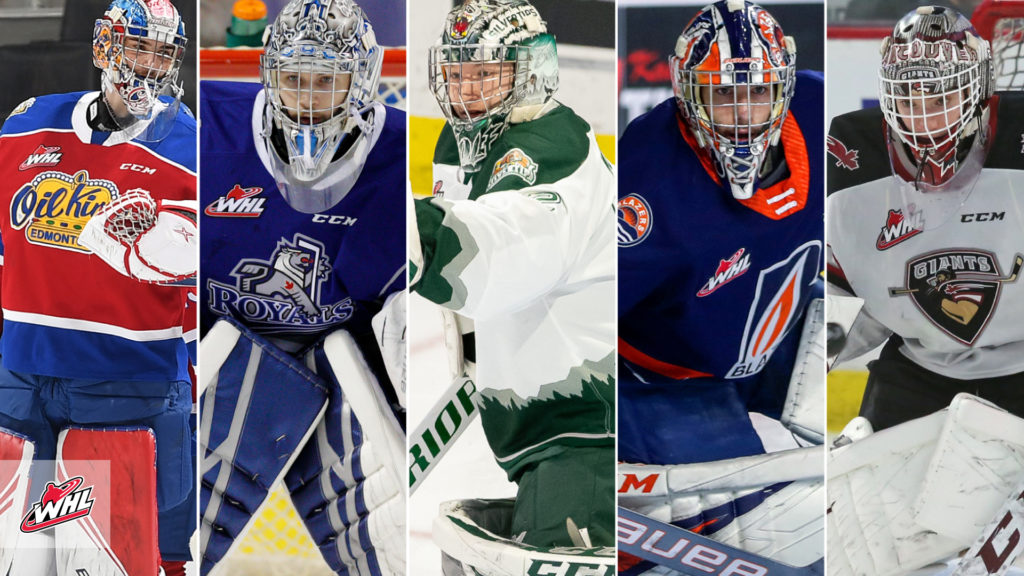 From start to finish, the 2019-20 Western Hockey League Regular Season provided plenty of standout performances both individually and as a team. Starting Friday, April 3, and featuring each Monday and Friday, we’ll reflect on key performers in statistical categories from the regular season that was. Welcome to the 2019-20 WHL Season Rewind. Today, we’re looking at the leaders between the pipes in goals-against average who played in a minimum of 40% of their team’s minutes throughout the regular season.

In 2,713 minutes of action, Calgary Flames prospect Dustin Wolf allowed just 85 goals for a stellar 1.88 GAA. Aiding his performance between the pipes for the Everett Silvertips were nine shutouts as well as 12 other appearances where he allowed just a single goal. In 31 of his 46 games, Wolf allowed two goals or fewer.

Posting the league’s lowest figure by a wide margin, the 18-year-old from Tustin, Calif. finished slightly behind his career-best single-season mark of 1.69 from the 2018-19 WHL Regular Season. Wolf still has a way to go to top the club record of 1.60 set by former teammate Carter Hart during the 2017-18 WHL Regular Season.

Overall, the 6-foot-0, 165-pound goaltender has played in 7,475 minutes over 127 WHL regular season games throughout the past three seasons, sporting a career 1.85 GAA along the way.

Playing in 1,585 of his team’s 3,870 minutes this season, Shane Farkas provided a spectacular 2.20 GAA with the Victoria Royals. In 19 of the 28 games, Farkas allowed two goals or fewer. That included a pair of shutouts, as well as 11 appearances where he allowed just a single goal.

Acquired from the Portland Winterhawks at the 2019 WHL Bantam Draft, Farkas posted a career-best GAA this season, lowering it from a 2.71 he posted in 2018-19 with the U.S. Division club. Former Royals goaltender Griffen Outhouse still maintains the club’s single-season record for GAA, maintaining a 1.82 figure during the 2015-16 season.

The WHL’s Western Conference Scholastic Player of the Year, Garand put forth his best effort on the ice as well with a 2.21 GAA over the course of 2,443 minutes of action for the Kamloops Blazers. Helping to lead them to their first B.C. Division title since 2012, the 17-year-old Garand allowed two goals or fewer in 28 of his 42 appearances.

Shining bright down the stretch of the 2018-19 WHL Regular Season, the Victoria, B.C. product took the starting goaltender reins in September 2019 and successfully led the team this year as well. In doing so, Garand broke a long-standing team record, topping Kenric Exner’s 2.31 figure from the 1998-99 WHL Regular Season.

The 6-foot-1, 172-pound goaltender has put himself onto the radar for the 2020 NHL Draft and is ranked sixth among North American goaltenders. While still early in Garand’s WHL career, the 18-year-old has played 4,004 minutes across 72 WHL regular season games for the Blazers to date, maintaining a career 2.50 GAA.

The Edmonton Oil Kings used four goaltenders throughout the 2019-20 WHL Regular Season, but a consistent part of the team’s rotation was always 17-year-old Sebastian Cossa. Playing 1,880 of his team’s 3,889 minutes, Cossa maintained a 2.23 GAA across 33 games as a rookie.

A product of Fort McMurray, Alta., Cossa allowed two goals or fewer in 20 of his 33 appearances. That included four shutouts as well as nine other games of allowing a single goal. While he appeared in 30 fewer games, Cossa edged former Oil King Tristan Jarry and his all-time mark of 2.24, which stood up as the club record entering this season.

The 6-foot-6, 206-pound goaltender will look to take on a larger role for the Oil Kings in coming seasons.

Playing 2,017 of his team’s 3,724 minutes, Arizona Coyotes prospect David Tendeck ended his WHL career with the Vancouver Giants by maintaining a superb 2.29 GAA. In 21 of his 35 appearances, Tendeck allowed two goals or fewer. He posted three shutouts and had seven games where he allowed just a single goal.

The 20-year-old from North Vancouver, B.C. set a career-best mark in GAA, an improvement on his 2.48 tally from the 2018-19 WHL Regular Season. The Giants’ club record for GAA in a single season still holds up after more than a decade as Tyson Sexsmith’s mark of 1.79 during the 2006-07 WHL Regular Season remains as the benchmark for future goaltenders to challenge. 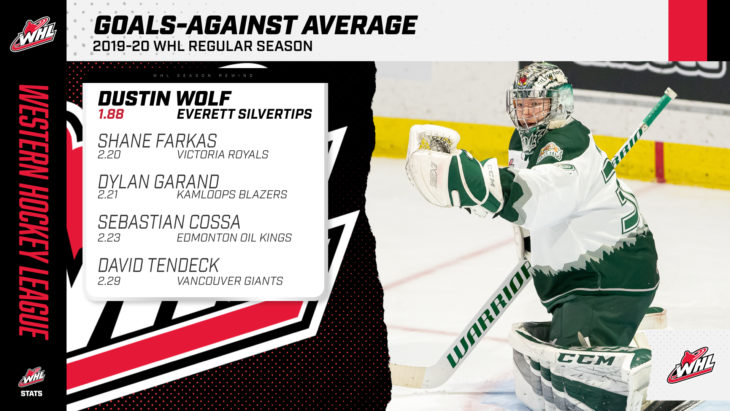