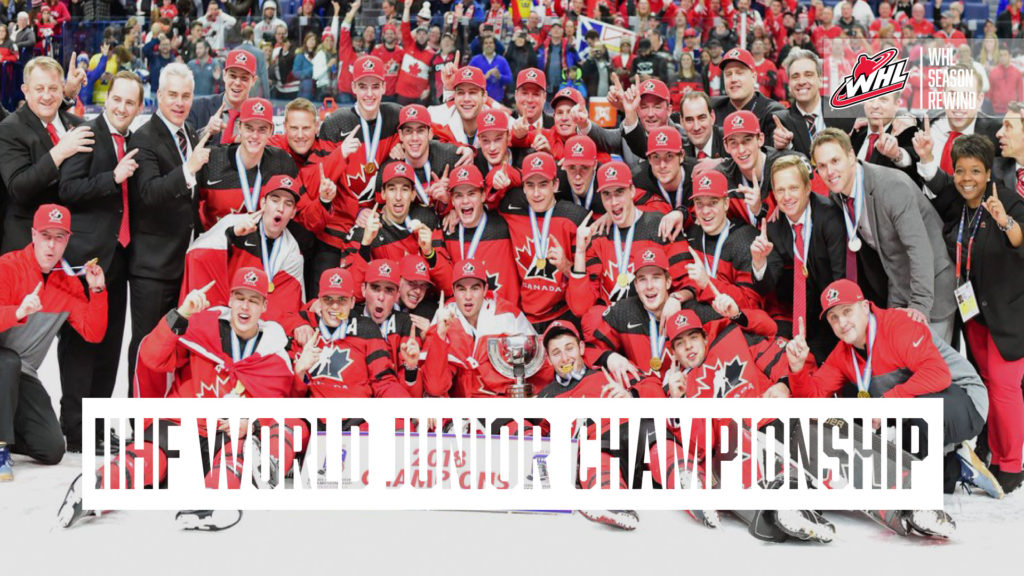 As the Western Hockey League’s 22-member clubs prepare for the 2018-19 WHL Regular Season, there’s renewed hopes of hoisting the Ed Chynoweth Cup at the conclusion of the 2019 WHL Playoffs. Before the season gets underway, it’s time to look back at the individual and team performances that made the 2017-18 season one to remember. Today, the WHL is taking a look back at the 2018 IIHF World Junior Championship, where Canada returned to the top of the hockey world once again thanks to the guidance of WHL stars. This is the WHL Season Rewind.

As of December 25, 2017, the IIHF World Junior Championship evoked some tough memories in the eyes of Canadian fans who watched their team take silver at the 2017 edition of the tournament nearly 12 months earlier on home ice.

But as the 2018 IIHF World Junior Championship began, the annually-renewed sense of optimism sparked once again as the tournament made its way to Buffalo, N.Y.

Canada’s coaching staff featured a representative from each of the three leagues in the Canadian Hockey League, with Moose Jaw Warriors head coach Tim Hunter representing the WHL. Joining him on the staff were athletic therapist Brian Cheeseman from the Edmonton  Oil Kings and Tim O’Donovan from the Kamloops Blazers, who served as the team’s video coach.

The process to select the team was amplified at the 2017 CIBC Canada Russia Series, where 13 players subsequently earned invitations to Canada’s National Junior Team Sport Chek Selection Camp. From those 13, Hockey Canada wound up taking eight WHL players onto their roster for the tournament.

Canada’s start at the tournament would actually begin in southern Ontario as they played a pair of pre-tournament games, downing the Czech Republic 9-0 in London, Ont. followed by an 8-1 rout of Switzerland in Hamilton, Ont., a sign of winning ways to come.

The lead up to the tournament also saw a pair of WHL players entrusted to the lead the team with Kelowna Rockets forward Dillon Dube earning the captaincy while Brandon Wheat Kings defenceman Kale Clague was named as an alternate.

In their tournament-opening 4-2 victory over Finland, Everett Silvertips goaltender Carter Hart backstopped the team to victory, making 29 saves on 31 shots. On the offensive side of the puck, Regina Pats captain Sam Steel notched his first of tournament as Canada’s second goal of the game. Both goals from Finland came courtesy of WHL players too with Aleksi Heponiemi and Henri Jokihajru finding the back of the net.

A superb 29-save performance from @C_Hart70 guides @HC_WJC to victory over Finland in #WorldJuniors opener.

Canada’s second game in the round-robin saw the red and white continue to roll along, this time to the tune of a 6-0 victory over Slovakia. Steel opened the scoring 3:39 into the first period, securing the game-winning goal. As Canada added their other five goals throughout the game, Steel added an assist for the multi-point game and Dube also picked up his first point of the tournament with an assist on his team’s second goal.

A game-winning goal from @ssteel23 kickstarted @HC_WJC's offence in a 6-0 victory over Slovakia Wednesday.

That set up another edition of the classic rivalry between Canada and the United States, taking place this time at New Era Field in Orchard Park, N.Y. With tens of thousands of fans cheering both teams on, the teams battled to a shootout, with Portland Winterhawks forward Kieffer Bellows scoring the winner for the Americans.

Dube and Steel teamed up for Canada’s second goal as the captain and Calgary Flames prospect earned his first of the tournament. Calgary Hitmen forward Jake Bean would also pick up an assist in the game.

The world is getting to know Sir Snipes-a-lot aka Dillon Dube. 😎 https://t.co/jO5P5e7IWb

The memories of the loss would be short-lived though as Canada clinched top spot in Group A with an 8-0 silencing of Denmark the day after the outdoor contest. Hart led the way with an 18-save shutout while Moose Jaw Warriors forward Brett Howden scored twice and Kelowna Rockets defenceman Cal Foote added three assists. Steel added a goal in the victory while Clague and Bean each picked up an assist.

Hart shuts the door and Howden scores twice as @HC_WJC top Group A at the #WorldJuniors Saturday!

That put Canada into the quarterfinals where they advanced with an 8-2 victory over Switzerland. Hart was in net again, stopping 13 of 15 shots.

Matching up against the Czech Republic in the semi-final, Canada moved forward to the gold medal game with a 7-2 victory. A goal and an assist from Steel powered Canada at the start, while Howden, Clague, Bean and Dube earned assists. Hart finished with 18 saves to once again earn the victory.

Facing Sweden in the championship game, WHL players rose to the pressure of the game. First, Dube opened the scoring 109 seconds into the second period with Steel picking up an assist on the goal as well.

With Sweden evening up the score later in the period, Canada was in need of a hero to lift them to gold in the third. That set the stage for Swift Current Broncos forward Tyler Steenbergen. The Arizona Coyotes prospect tipped a point shot in the net with 1:40 to go in the game.

From there, Hart would continue to shut the door on Sweden’s offence, making 35 saves in the game as Canada completed their golden moment.

We know someone who just earned himself a few free Steen-burgers at the @SCBroncos concession stand. 😏 🍔 #WorldJuniors 🇨🇦

Eight WHL players have won gold with @HC_WJC at the 2018 #WorldJuniors!

A nomadic minor hockey experience has Dillon Dubé perfectly suited to wear the 'C' and embrace the challenges of the #WorldJuniors. READ: https://t.co/Pv2Ariwejd pic.twitter.com/8gfvIjNnMM

Canada’s 17th title at the tournament was never guaranteed, but never felt totally in doubt either as they moved from one challenge to the next. The pressure now comes back onto Canada’s home turf as Vancouver and Victoria, B.C. get set to REPRESENT at the 2019 IIHF World Junior Championship this coming December and January.

#REPRESENT when the #WorldJuniors returns to the west coast! 🍁