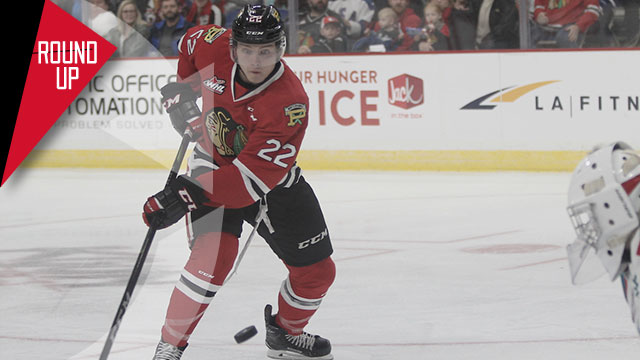 Schael Higson’s first goal of the season was a rocket, propelling the Brandon Wheat Kings to their fifth straight victory Sunday afternoon at home against the Prince Albert Raiders.

Higson’s bomb of a shot completed what had started as a comeback in the third period for the Wheat Kings as they completed a perfect weekend at home.

Montgomery opened the scoring again in the second, which stood up as the lone goal of the period as the visitors took a one-goal lead to the third. There, the Raiders continued to increase their lead. First, Curtis Miske and Ben McCartney traded goals for the Raiders and Wheat Kings respectively. That was followed seven minutes later by Fonstad’s second of the game, giving the Raiders a two-goal lead.

In the extra period, all it took was 92 seconds to reach a conclusion. With the Wheat Kings regrouping to change up lines, Higson took control of the puck, carried the puck over the blue line and fired a slap shot past Curtis Meger for the game-winner.

Dylan Myskiw made 20 saves in the victory while Meger made 25 stops on 31 shots.

The Wheat Kings will now head to the Queen City for their next contest, taking on the Regina Pats Wednesday. The Raiders will regroup and host the Vancouver Giants Tuesday at the Art Hauser Centre.

Pittsburgh Penguins prospect Jordy Bellerive broke open 1-1 tie 8:17 into the third period Sunday as the Lethbridge Hurricanes opened up their season series against the Calgary Hitmen with a 3-1 win.

Jakob Stukel had opened the scoring 3:22 into the first period, but that would be the lone goal for the home side throughout the entire contest as they suffered their sixth regulation loss of the season.

Stuart Skinner secured the victory with 30 saves Sunday while Nick Schneider made faced 37 shots are the other end.

The Hitmen had four opportunities with the man-advantage Sunday, but were unable to convert on any of them.

Up next for the Hurricanes is a seven-game home stand starting Friday against the Swift Current Broncos. The Hitmen will head back onto the road to face the Red Deer Rebels next Friday.

#WHLCanes earn a 3-1 victory today over the Calgary Hitmen; improve to 4-4-0-0 on the season! Estephan, Bellerive, Franklin score! #YQL pic.twitter.com/V9caxWt7JT

Emil Oksanen finished off a beautiful tic-tac-toe play with Josh Mahura and Sam Steel Sunday at the Brandt Centre in overtime, sending the Pats to an important home victory.

The Oil Kings opened the scoring in the second period, with Connor McDonald putting the visiting side up early. Matt Bradley had tied up the game later on in the period, but that 1-1 score didn’t last long, with Davis Koch scoring 58 seconds later to keep the Oil Kings in the lead.

It wasn’t until the midway mark of the third that the Pats managed to tie things up, but on a power play, Sam Steel evened things up, which is how they’d stay for the rest of regulation.

The Pats gained the upper-hand going into the overtime period as the Oil Kings took a too many men call at the final buzzer. That set the stage for Oksanen’s winner exactly a minute into overtime. He initially passed the puck off to Luke Mahura, who sent it to Sam Steel, who then fed it back to Oksanen, who had an empty cage waiting for him.

The Pats host the Brandon Wheat Kings Wednesday in WHL on Access action starting at 7 p.m.

Throughout a 72-game regular season, it’s important for all WHL clubs to be models of consistency. The Portland Winterhawks definition of consistency continued to be elevated Sunday as they put on another offensive clinic in an 8-2 win over the Kelowna Rockets.

Kieffer Bellows and Skyler McKenzie each had a pair of goals and an assist as the Rockets moved one point back of the Western Conference-leading Victoria Royals with a game in-hand.

Opening the first period with three goals, the Winterhawks added three more in the second period and two more in the third. The Rockets tallied single goals in the second and third period, both on the power play.

The Winterhawks did well to spread out their offence, with the closest goals scored within a 2:16 span.

Joachim Blichfeld had a goal and an assist while rookie Ty Kolle continued to impress with three assists to his credit. The 2018 draft eligible center has already doubled his point total from 13 games last season. Sunday marked the third multi-point game of his young WHL career.

Gordie Ballhorn and Conner Bruggen-Cate scored for Kelowna in the loss.

The Winterhawks will now travel to face the Rockets for a pair of games at Prospera Place next weekend. Before the Rockets return home, they’ll head to Kennewick, Wash. to face the Tri-City Americans Tuesday.