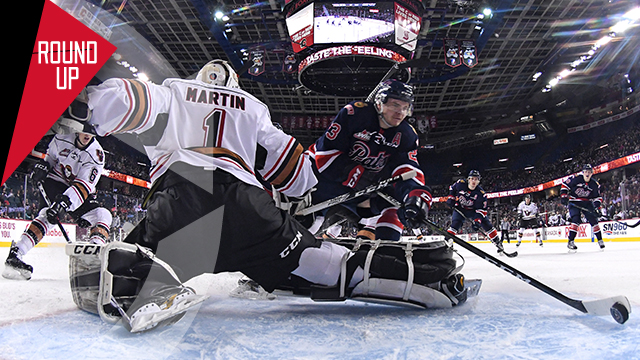 A 10-game night made for a busy go around the Western Hockey League on Friday.

In Calgary, the Regina Pats and Hitmen treated fans and viewers on WHL on Shaw with a back-and-forth affair that was eventually settled by LA Kings prospect Austin Wagner in overtime.

Cole Kehler turned in a monster performance as the Portland Winterhawks knocked off the Everett Silvertips, while the Kootenay ICE edged the Spokane Chiefs in Cranbrook.

A pair of B.C. Division matchups saw the Kelowna Rockets fall to the Kamloops Blazers, while the Victoria Royals got the better of the Vancouver Giants.

The Medicine Hat Tigers laid a beating down on the Edmonton Oil Kings and the Lethbridge Hurricanes recorded points for the ninth straight outing by defeating Prince Albert. Remaining in Saskatchewan, the Moose Jaw Warriors doubled up the Saskatoon Blades.

In Red Deer, the Rebels defeated the Prince George Cougars, while the Seattle Thunderbirds snuck past the Tri-City Americans.

Here’s the rest of the story…

Jake Bean had a hat trick and it was nearly enough to get the Calgary Hitmen two points, but a four-point effort from Sam Steel helped pace the Regina Pats to a 6-5 overtime victory on WHL on Shaw Friday night at the Scotiabank Saddledome.

Steel opened the scoring, dancing down the wing past the Calgary defence before cutting across the top of the crease and depositing his 35th of the campaign past Martin 4:24 into the proceedings.

Then it was Bean’s turn to get rolling. The Carolina Hurricanes prospects scored back-to-back markers over the course of 51 seconds – the first at 14:08 and the second at 14:59 – to give the Hitmen a 2-1 lead after 20 minutes of play.

The Pats retook the lead after Jeff de Wit and Adam Brooks scored 1:02 apart – both on the power play – early in the second period. Dawson Leedahl made it a 4-2 game with 5:46 to go in the period, only to see Luke Coleman find the back of the net 38 seconds later to keep the Hitmen within one heading into the third period.

Steel struck for the second time 5:58 into the third period as Regina reclaimed a two-goal advantage. Jakob Stukel started the comeback for the hosts, finding the back of the net on a power play. Bean knotted the game and brought hats down from the rafters of the Saddledome, securing his sixth goal of the season and third of the night on a power play with 4:31 to go in regulation.

After exchanging opportunities in the early stages of three-on-three overtime, Austin Wagner was left all alone in front to bury a loose puck past Trevor Martin, giving the Pats the bonus point.

The two teams combined to score five times on the man advantage Friday evening, with Regina going 2-for-6 and Calgary going 3-for-9.

Jordan Hollett made 31 saves for his ninth win of the campaign.

For the Hitmen, Bean also had a four-point evening, adding an assist to his total, while Mark Kastelic (2A), Andrei Grishakov (2A) and Matteo Gennaro (3A) contributed on multiple occasions as well.

Cole Kehler made 46 saves, backstopping the Portland Winterhawks to a huge 4-1 win over the Everett Silvertips in U.S. Division action Friday evening.

Dominic Zwerger responded for the Silvertips, scoring his 20th of the season midway through the second period.

For Kehler, the victory was his 18th of the season.

#HAWKS WIN! @kehler298 with great work in net tonight, stopping 46 of 47! The game at a glance is presented by @Toyota. pic.twitter.com/qclYToE7lf

The Kamloops Blazers maintained a leg up on their B.C. Division rivals from the Interior, edged the Kelowna Rockets by a 3-2 margin Friday night.

Latvian import Rudolfs Balcers scored his second goal of the night on a power play with 7:37 remaining in regulation, giving the Blazers a 3-2 advantage and closing out the scoring in what was a back-and-forth affair.

Lane Bauer notched the other marker for Kamloops while Lucas Johansen and Calvin Thurkauf replied for Kelowna.

Connor Ingram made 30 saves for his 18th win of the season.

Deven Sideroff recorded two helpers for the Blazers, as did Nick Merkley for the Rockets. Thurkauf had a multipoint night as well, adding an assist to his 22nd goal of the season.

The triumph gave the Blazers a five-point lead on the Rockets for second place in the B.C. Division, though Kelowna holds one game in hand.

Balcers with the winner on the PP in the third!! Blazers beat the Rockets 3-2 in Kelowna for their 30th win of the season!!

Colton Kroeker scored a power-play goal with 11:32 to go in regulation, snapping a tie game and giving the Kootenay ICE a 3-2 win over the Spokane Chiefs on Friday.

Brett Davis (power play) and Vince Loschiavo scored the other goals for the ICE, while Jaret Anderson-Dolan and rookie Eli Zummack replied for the Chiefs.

Rookie netminder Jakob Walter made 38 saves, earning his third win of the campaign.

3 points from Colton Kroeker, including the GWG as the ICE win 3-2!

40 saves from @jakobwalter4 in goal!

Matt Bradley and Steven Owre each recorded three points, helping the Medicine Hat Tigers to a 7-2 win over the Edmonton Oil Kings on Friday.

Nicholas Bowman opened the scoring 1:39 into the festivities, tallying his sixth of the season on a power play to give the Oil Kings a 1-0 edge. Mason Shaw replied with his 17th of the season, also on a power play, less than three minutes later to even the score. Dalton Gally and Bradley joined in midway through the first period as the Tigers took a 3-1 advantage into the dressing room after 20 minutes.

Gary Haden kept the offense coming for the Tigers, notching his fourth of the game 5:14 into the second period. Adam Berg briefly stemmed the bleeding for the Oil Kings, but back-to-back strikes from Clayton Kirichenko and Jordan Henderson gave the Tigers a 6-2 lead after 40 minutes of play.

Owre rounded out the scoring with his 18th of the season with one second remaining in regulation.

Nick Schneider made 24 saves for his 27th win of the season.

Riley Stadel had two assists in defeat for Edmonton.

TIGERS WIN! @GaryHaden & @galstorm33 both score in a 7-2 romp over @EdmOilKings Friday night!

The Moose Jaw Warriors scored twice in the third period en route their fourth consecutive win – a 4-2 decision over the Saskatoon Blades – on Friday.

Josh Brook scored the eventual game-winner 4:48 into the final period before Spencer Bast added some insurance with 5:34 remaining in regulation.

Brett Howden and Yan Khomenko provided the other scoring the Warriors, while Jesse Shynkaruk and Bryton Sayers replied for the Blades.

Zach Sawchenko made 21 saves to reach the 20-win plateau.

Justin Almeida (2A), Jayden Halbgewachs (2A) and Branden Klatt (2A) got in on the multipoint action for the Warriors.

With a 5-4 win over the Prince Albert Raiders on Friday, the Lethbridge Hurricanes have now collected points in nine consecutive games, seven of which have been wins.

Defenceman Brennan Menell had two goals and an assist in the win for Lethbridge.

The Hurricanes claimed a 3-0 lead in the first period after Tyler Wong notched his 35th of the season and Menell added his eighth and ninth of the campaign.

The Raiders battled back in the second period as Kolten Olynek, Cavin Leth and Nick Heid all scored surrounding one tally from Jadon Joseph, leaving Lethbridge with a 4-3 advantage heading into the final period.

Ryan Bowen scored his 10th of the season 1:46 into the third period and it went on to stand as the eventual game-winner. Leth struck for the second time on the night to close out the scoring.

Stuart Skinner made 35 saves for his 24th win of the season.

The Red Deer Rebels got three points out of Michael Spacek as they topped the Prince George Cougars with a 5-2 victory on Friday evening.

Spacek scored his 21st goal of the season with 45 seconds remaining in the first period to open the scoring, before adding a pair of assists further down the line.

Cameron Hausinger made it a 2-0 game midway through the second period before Tate Olson got the Cougars on the board with a power-play effort. Jared Bethune’s 14th of the season knotted the score 2:56 into the third period.

But from there, the Rebels rattled off three consecutive goals, including a power-play strike from Carson Sass that went on to stand as the winner. Evan Polei potted two goals – his 21st and 22nd of the season – to finish off the triumph.

Lasse Petersen made 30 saves for his 12th win of the season, while Ty Edmonds turned away 40 shots in defeat.

The Seattle Thunderbirds won their third consecutive game and have now won nine of their previous 10 outings following a 4-3 triumph over the Tri-City Americans on Friday.

Donovan Neuls scored the difference-maker – a short-handed strike – 8:47 into the third period.

Ethan Bear, Turner Ottenbreit and Alexander True provided the rest of the scoring for Seattle, with True’s tally serving as another short-handed effort for the Thunderbirds.

Michael Rasmussen scored his 31st and 32nd goals of the year and grabbed an assist to log a three-point night. Jordan Topping completed the scoring for Tri-City.

Rylan Toth made 25 saves for his 23rd win of the season.

The Victoria Royals moved into a tie with the Kelowna Rockets for third place in the B.C. Division following a 3-1 win over the Vancouver Giants on Friday.

Jack Walker and Scott Walford scored in the first period to give the Royals a 2-0 lead before Ethan Price made it a 3-0 game midway through the second period.

Outhouse finished the night with 21 saves for his 27th win of the season.

The Royals and Rockets sit deadlocked at 58 points – five back of the Kamloops Blazers – through Kelowna holds one game in hand on Victoria.

Scott Walford tallied the game winner as the Royals took down the Giants 3-1 on Friday night.