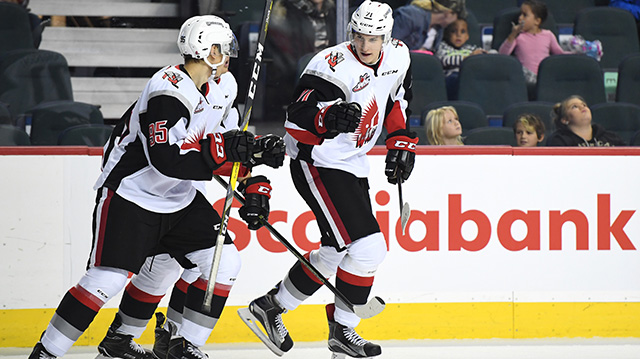 With only one game on Sunday’s Western Hockey League slate, the spotlight falls solely on Calgary as the Hitmen played host to the Moose Jaw Warriors in a matinee affair.

A big, burly Russian by the name of Nikita Popugaev seized the stage and exerted his will, registering a hat trick, including the overtime winner to lead the visiting Warriors to a 4-3 victory.

The goals served as Popugaev’s fifth, sixth, and seventh, respectively, of the season.

To top it off, Warriors veteran Jayden Halbgewachs continued his outstanding start to the 2016-17 campaign by logging a goal and an assist. The 5-foot-8, 160-pound product of Emerald Lake, Sask., notched his ninth goal of the season and boosted his totals to 14 points through 10 games to date. The 19-year-old is well on pace to shatter his career marks in all major offensive categories, having registered 15 goals, 26 assists and 41 points last season.

Zach Sawchenko made 27 saves for his second win of the season, while Kyle Dumba surrendered four goals on 19 shots.

Nikita Popugaev finishes off the hat trick to win the game 4-3! pic.twitter.com/CSqS25tMDg