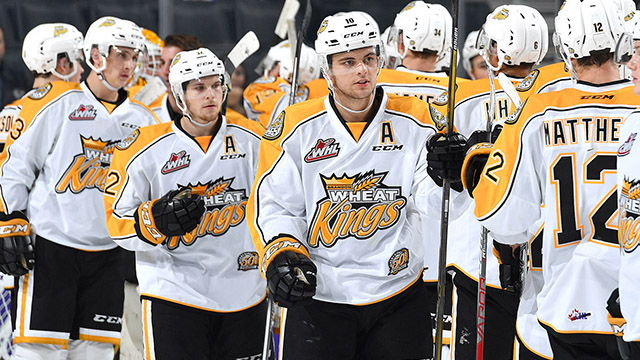 The Edmonton Oil Kings plastered Jordan Papirny with a pile of pucks Tuesday night, but still couldn’t come up with a win as the Brandon Wheat Kings escape Rogers Place with two points courtesy another standout showing from reigning CHL Player of the Week Kale Clague.

In Moose Jaw, the Spokane Chiefs had the offense going in rapid-fire fashion during the early stages of the second period en route to a 6-2 triumph over the Warriors.

Two of the Western Conference’s most entertaining goaltenders went save-for-save in Kamloops as Griffen Outhouse and the Victoria Royals edged the Blazers by a 2-1 margin.

Imports Vladislav Lukin and Juuso Valimaki paced the Tri-City Americans in a key 4-3 win over the Portland Winterhawks, shaking up the U.S. Division standings ever so slightly.

Kale Clague celebrated being named CHL Player of the Week by continuing his outstanding performance, chipping in with a goal and two assists as the Brandon Wheat Kings crowned the Edmonton Oil Kings 5-3 Tuesday night.

Clague – a second round pick of the NHL’s Los Angeles Kings – built upon his previous week to boost his 2016-17 totals to two goals and nine points in three games.

Ty Lewis lent a helping hand, providing three assists as well. The Wheat Kings skated to victory despite being outshot 45-16 in the contest as 20-year-old Jordan Papirny made 42 saves to collect his fourth victory of the season.

The win served as the fourth consecutive triumph for the Wheat Kings.

Hudson Elynuik had two goals and an assist, while Kailer Yamamoto contributed a goal and two assists to lead the Spokane Chiefs to a 6-2 road victory over the Moose Jaw Warriors Tuesday.

In addition to Elyuik and the younger Yamamoto, the Chiefs also received scoring from Tanner Wishnowski and Keanu Yamamoto, with each producing a goal and an assist.

The Warriors opened the scoring only 14 seconds into the festivities as Brett Howden registered his ninth goal of the season.

But in a matter of 2:59 early in the second period, the Chiefs seriously swung the momentum. Jeff Faith tallied his first of the season only 26 seconds into the middle period before Elynuik notched his first of the evening and second of the campaign 42 seconds later. For good measure, Kailer Yamamoto added to the onslaught 2:17 after Elynuik and suddenly the visitors were enjoying a 3-1 lead.

If three goals in a quick span wasn’t exciting enough, Russian import Nikita Popugaev replied 14 seconds after Kailer Yamamoto to pull the Warriors back within one, but it wouldn’t be enough. Keanu Yamamoto scored 46 seconds into the third period, a quick strike that certainly took any wind out of the hosts sails.

Chiefs grab their first W on the eastern road swing with a 6-2 victory over the Moose Jaw Warriors. #GoChiefsGo pic.twitter.com/iL8eWJDkOw

Tuesday night featured a goaltenders’ battle within the B.C. Division as two of the Western Conference’s best went save-for-save at the Sandman Centre in Kamloops.

At one end of the rink, Griffen Outhouse made 33 saves, outdueling Connor Ingram and his 37 saves to backstop the Victoria Royals to a 2-1 victory over the Kamloops Blazers.

While Outhouse tended to the blue paint, earning his eighth win of the campaign, veteran forward Jack Walker tallied a goal and an assist to fuel the offense. The 20-year-old native of Edina, Minn., now has eight goals and 13 points to his named through 12 contests.

Dante Hannoun registered the eventual game-winning goal only 49 seconds into the third period.

With the win, the Royals vaulted two points past the Blazers in the ever tight B.C. Division, skating into second place with 16 points, trailing the Prince George Cougars (23 points).

ROYALS WIN! Dante Hannoun scored the game-winning goal and @outhouse40 made 33 saves for the victory! pic.twitter.com/kfXgj9cNcE

With a 4-3 victory Tuesday night, the Tri-City Americans leapfrogged the Portland Winterhawks in the U.S. Division race, moving into second place.

With his eighth goal of the season, Lukin broke a 3-3 tie with 6:07 remaining in regulation.

Between the pipes, veteran Rylan Parenteau made 30 saves for his fifth win of the campaign.

For Portland, the loss represented the club’s third consecutive defeat.

Americans win it!!! 4-3 on a great team effort! Tri-City movse themselves into 2nd place in the US Division! #GoAms Post Game Gallery soon. pic.twitter.com/KJvNfZUqrA