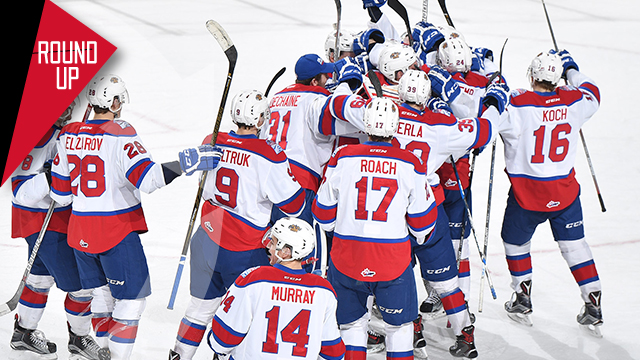 A relatively quiet Sunday Funday with only two games on the WHL schedule – both of the Central Division variety.

In Edmonton, the Oil Kings ended a lengthy low with an overtime win over their archrivals from Calgary on CHL on Sportsnet, while the Lethbridge Hurricanes secured two points with a win in Cranbrook against the Kootenay ICE.

Let’s fill out the details…

Rejoice in the City of Champions was sparked off the stick of veteran Tyler Robertson Sunday afternoon on CHL on Sportsnet. The 20-year-old product of Sherwood Park, Alta., scored 1:12 into overtime, giving the Edmonton Oil Kings a 3-2 victory over the Calgary Hitmen and bringing a 16-game skid to a crashing halt.

Oddly enough, the last time the Oil Kings came out on top was on Jan. 1 in a 4-3 overtime win over those same Hitmen, back on the ice at Rogers Place.

Trey Fix-Wolansky opened the scoring with his 15th goal of the season 2:50 into the first period before Davis Koch scored his 16th of the campaign 6:02 in to double the lead.

Calgary clawed its way back into the festivities before the first period came to an end.

Beck Malestyn notched his 23rd goal of the season with 6:23 remaining in the opening period to pull his club within one and Jake Bean’s seventh of the year came on a power-play opportunity moments later to square things off.

The rest of regulation went without another goal, sending the two teams to extra time.

In net, Patrick Dea turned aside 22 of 24 shots and even added an assist to claim his 17th win of the season. At the other end, Trevor Martin was good on 29 of 32 shots.

Despite the loss, the Hitmen grabbed a single point as a result of the overtime loss, pulling within a pair of the Saskatoon Blades for the second and final wild card in the Eastern Conference. The Blades hold one game in hand, having played 55 games to Calgary’s 55.

The Hitmen and Oil Kings will tango once again this week, Friday at the Scotiabank Saddledome in Calgary.

Old ghosts were at play in Cranbrook Sunday afternoon, and needless to say, they served to haunt their former mates.

Zak Zborosky scored twice and set up his new captain – Tyler Wong – for the game-winning marker, as the Lethbridge Hurricanes defeated the Kootenay ICE by a 6-4 margin at Western Financial Place.

Zborosky and Matt Alfaro were two of the big fish acquired by the Hurricanes from the ICE at the WHL Trade Deadline back on Jan. 10, and both put found ways to the scoresheet in their old barn to close the weekend.

First, former Hurricane Colton Kroeker – who landed in Cranbrook as a part of the deal that sent Alfaro and Zborosky across the border to southern Alberta – scored twice (his 12th and 13th goals of the season) before the midpoint of the first period, giving the hosts a 2-0 lead.

Not to be outdone, Zborosky tallied his 35th and 36th goals of the year only 1:27 apart to even the score. Alfaro assisted on Zborosky’s first tally of the day. Rookie Josh Tarzwell gave the visitors a 3-2 lead late in the first period only to see Vince Loschiavo’s 21st goal of the campaign tie things 3-3.

A crazy first period wrapped up shortly after Egor Babenko put his 19th of the season to the back of the net with 15 seconds to go, giving Lethbridge a 4-3 edge after 20 minutes of play.

Wong’s 40th of the season – assisted on by Zborosky – came 6:10 into the second period and stood as the eventual game-winner. Ryan Vandervlis scored on a short-handed effort a few minutes later to provide some insurance for the Hurricanes.

Kaeden Taphorn secured his fourth goal of the season to get the ICE back within two goals, but that’s as close as they’d come.

Adam Swan – a 16-year-old rookie from Ashern, Man. – made 28 saves on 32 shots, collecting his first career WHL victory in only his second career appearance.

The ICE netminders faced a barrage at the other end of the rink as the Hurricanes sent a grand total 59 shots in on net. Jakob Walter allowed five goals on 25 shots before getting the hook, giving way for Payton Lee. The veteran Cranbrook product was steady from there on, turning aside 33 of the 34 shots he faced over little more than 32 minutes of action.

Wong (1G-1A) and Zborosky (2G-1A) helped fuel the Hurricanes offense, while Kroeker (2G-1A) and Brett Davis (2A) pushed the ICE along.

The Hurricanes – who saw a run of 15 games without a regulation loss come to an end Saturday against the division-leading Medicine Hat Tigers – got back into the win column and pulled within six points of the division lead. Both the Tigers and Hurricanes have 15 games remaining in their respective regular season schedules.