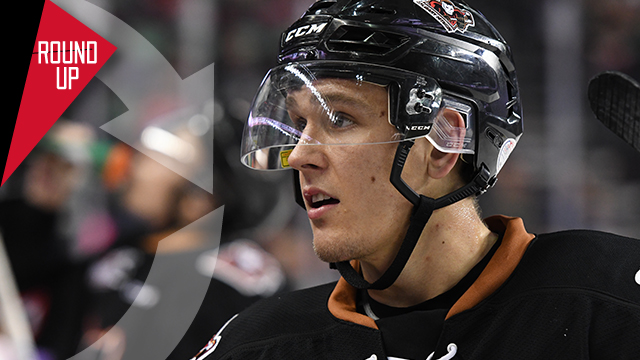 Well, we got one step closer to figure out the big dance.

At the very least, the Western Hockey League’s Eastern Conference card is ready to rumble.

The Calgary Hitmen took care of that Friday night, knocking off the Kootenay ICE to secure the final wild card seed on the eastern side of the league, setting up for a first-round matchup against the Regina Pats.

Outside that, everything in the Western Conference remains a muddy, muddy mess. But that’s okay, because it means every single regular season minute remaining matters.

We had some hat-trick fun Friday night as Kailer Yamamoto and Beck Malenstyn tickled twine three times each. Kole Lind and Adam Brooks both recorded four points in their respective outings.

The Medicine Hat Tigers trounced the Lethbridge Hurricanes, becoming the second team to reach 50 wins this season. The Regina Pats were the first to do so Wednesday night.

We’ve got a number of gaps to fill in from the above, so let’s get to it…

Jesse Gabrielle scored twice, including the game-winning goal, as the Prince George Cougars defeated the Kamloops Blazers by a 3-1 margin on WHL on Shaw.

Kody McDonald gave the Cougars a 1-0 advantage late in the first period before Gabrielle struck twice in the second period to give Prince George a 3-0 lead.

Nic Holowko tallied his seventh of the season to get Kamloops on the board midway through the second period, but that’s all the scoring the Blazers found as Ty Edmonds made 24 saves for his 31st win of the season and 100th of his WHL career.

Josh Anderson and Nikita Popugaev each logged a pair of assists for the Cougars.

With the win, the Cougars remain atop the B.C. Division with only one game to go. They host the Blazers up north Saturday evening.

Congratulations to @tyedmonds_35 who now has 100 career @TheWHL victories!!! He made 24 saves in this one!

Michael Herringer made 21 saves for his second shutout of the campaign.

Reid Gardiner opened the scoring with his 17th of the season only 52 seconds into the contest. Nolan Foote added his 18th of the year, a power-play goal, and the Rockets took a 2-0 lead into the first intermission.

Southam notched his first of the night with a power-play effort 5:59 into the second period. Kyle Topping doubled the trouble only 13 seconds later, making it 4-0 with his 14th of the season.

Southam kept the roll going to start the third period, securing his 19th goal of the season 8:20 in. From there, James Hilsendager added another power-play marker before Kole Lind tallied his 29th of the campaign to round out the scoring.

The win keeps the Rockets within striking distance of the Prince George Cougars for first place in the B.C. Division title. Only two points separate the clubs, with each set to play their final game Saturday evening. Prince George hosts the Kamloops Blazers while the Rockets travel to Vancouver for a finale with the Giants.

Beck Malenstyn registered a hat trick as the Calgary Hitmen crushed the Kootenay ICE by a 6-1 score to clinch the second wild card seed in the Eastern Conference Friday night.

After a scoreless first period, Jake Kryski, Tyler Mrkonjic and Malenstyn scored in the second period to give the Hitmen a commanding 3-0 lead only 6:04 in. For Malenstyn, his first of the night served as his 30th of the season.

Max Patterson used a power-play opportunity to get the ICE on the board before the middle period came to a close.

Malenstyn restored the three-goal advantage 3:59 into the third period and Matteo Gennaro added his 43rd of the year 1:16 later, utilizing a power-play opportunity. Malenstyn completed the hat-trick performance with a short-handed effort later in the period.

Cody Porter made 20 saves for his 14th win of the season.

With the win, the Hitmen eliminated the Saskatoon Blades from post-season contention and locked up the second wild card seed in the Eastern Conference. With that in mind, they will now face the Regina Pats in the opening round of the 2017 WHL Playoffs.

The Hitmen and ICE will wrap up their respective regular season schedules at the Scotiabank Saddledome in Calgary.

John Dahlstrom opened the scoring with his 30th of the season – a power-play effort. Then it was Hamblin hitting the 20-goal plateau with his first of the night. That marker went on to stand as the eventual game-winner.

Chad Butcher’s 27th of the season came 3:30 into the second period to make it 3-0 before Ryan Bowen got Lethbridge on the board with a short-handed tally. Mark Rassell replied less than two minutes later with his 35th of the year to restore the three-goal lead for the Tigers.

Hamblin added his second goal of the night midway through the third period to round out the scoring.

Michael Bullion made 32 saves for his 21st win of the season.

Clayton Kirichenko (3A), Hamblin (2G) and Butcher (1G-1A) helped pace the offense for the Tigers.

With everything all lined up in the Eastern Conference, the Tigers will host the Brandon Wheat Kings while the Hurricanes will host the Red Deer Rebels to open the 2017 WHL Playoffs.

Adam Brooks hauled in four points, including two goals, as the Regina Pats beat up the Brandon Wheat Kings 7-1 on WHL on Access Friday night.

The Pats’ captain opened the scoring with his 41st of the season only 34 seconds into the contest. Midway through the first period, Sam Steel hit the 50-goal plateau with a power-play snipe from the left circle.

Braydon Buziak converted a short-handed opportunity to give Regina a 3-0 lead 6:23 into the second period before Daniel Bukac got the Wheat Kings on the board to make it a 3-1 game. From there, the Pats rattled off three consecutive second period goals to take full control.

First, Austin Wagner notched his 29th of the season and then Brooks collected his second of the evening. Filip Ahl finished up the outburst by scoring his 27th of the season.

Tyler Brown made 21 saves for his 33rd win of the season.

With everything set in the Eastern Conference playoff picture, the Pats will host the Calgary Hitmen while the Wheat Kings travel to Medicine Hat for a first-round series with the Tigers.

Prior to that, these two clubs will close their regular season schedules Saturday night back in Brandon.

The Saskatoon Blades did their part to stay alive in the playoff race, scoring a 5-3 win over the Prince Albert Raiders Friday night, but a road win by the Calgary Hitmen officially killed any post-season dreams for the Bridge City boys.

After Cavin Leth opened the scoring 8:13 into the first period, the Blades responded with four consecutive goals as Jesse Shynkaruk, Braylon Shmyr, Michael Farren and Gage Ramsay all found the back of the net. Shmyr’s 35th of the season came with a man advantage while Ramsay’s ninth of the campaign came while down a skater.

Parker Kelly secured a short-handed goal of his own to open the third period and Spencer Moe followed up as the Raiders clawed back into the contest.

Josh Paterson eventually hit an empty net to ice the win for the Blades.

Logan Flodell made 36 saves for his 22nd win of the season.

Both the Blades and Raiders will miss the playoffs. The two teams finish their seasons Saturday night back in Prince Albert.

Aleksi Heponiemi scored with 2:25 to go in regulation, giving the Swift Current Broncos a 2-1 win over the Moose Jaw Warriors Friday night.

With the Eastern Conference playoff scene set, Friday served as the first game of a two-night advance screening as the Broncos and Warriors will go to blows in the first round of the WHL Playoffs next week. The two teams finish their regular season slate Saturday back in Moose Jaw.

As for Friday, Matt Sozanski opened the scoring midway through the first period before Glenn Gawdin provided the game-tying goal for the Broncos 5:58 into the second period.

Taz Burman made 34 saves for his 18th win of the season.

Morgan Geekie scored his second goal of the night 28 seconds into overtime as the Tri-City Americans escaped with a 5-4 win over the Spokane Chiefs Friday night.

Trailing 4-2 with less than two minutes to go in regulation, Kailer Yamamoto came to the rescue for Spokane, scoring his second and third goals of the night in a span of 26 seconds to tie the game and force overtime. The clutch performance gives Yamamoto 42 goals on the year, after his first of the night got him to the 40-goal plateau.

Evan Sarthou made 32 saves for his 11th win of the season.

While the Chiefs will miss the post-season, plenty remains to be decided for the Americans. Friday’s win gives Tri-City 81 points, leaving them one back of the Portland Winterhawks for third place in the U.S. Division. It also puts them one point ahead of the Victoria Royals for the first wild card in the Western Conference.

Each U.S. Division club has two games remaining and will play both Saturday and Sunday. For Tri-City, they travel Spokane Saturday night before returning home to host the Everett Silvertips Sunday evening.

The Winterhawks visit the Seattle Thunderbirds Saturday night before playing host to the Chiefs Sunday evening.

Up north, the Victoria Royals have only one game remaining and it comes Saturday night in Everett.

The Everett Silvertips made good use of their game in hand on the Seattle Thunderbirds, doubling up the Victoria Royals by a 4-2 tally to jump back into first place in the U.S. Division Friday night.

Jack Walker opened the scoring, notching his 30th of the season 5:56 into the first period. Kevin Davis replied and Fonteyne secured his first of the night to give Everett a 2-1 lead after 20 minutes of play.

Walker tied the game 22 seconds into the second period by Eetu Tuulola responded only 1:10 later to restore the Everett advantage. Fonteyne added the insurance marker 1:27 later and that was all the scoring fans were privy to.

Carter Hart made 25 saves for his 31st win of the season.

Patrick Bajkov (2A), Fonteyne (2G) and Dominic Zwerger (2A) sparked the Silvertips. Scott Walford contributed a pair of assists towards the Royals cause.

The Silvertips have two games remaining on their regular season schedule and remain in a tooth-and-nail scrap with the Seattle Thunderbirds for first place in the U.S. Division. Both teams have two games to go and Everett remains one point up on their regional rival.

The Silvertips host the Royals again Saturday before closing the season Sunday in Kennewick, Wash., against the Tri-City Americans. The Thunderbirds finish the campaign by hosting the Portland Winterhawks Saturday and Vancouver Giants Sunday.

As for the Royals, they continue to battle for wild card positioning. Victoria has one game to play against Everett and sits in the second wild card seed, one point back of the Americans.

97 points, back in 1st place. Victory in Victoria.