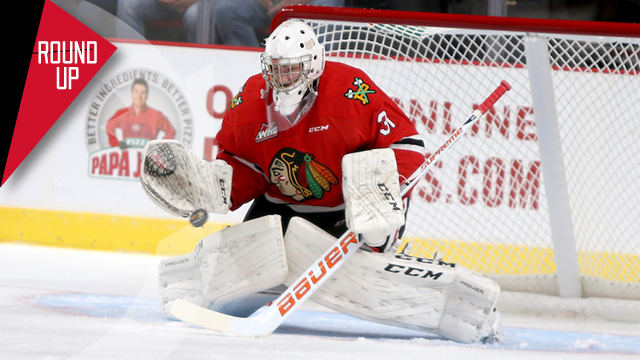 With British Columbia enjoying its Family Day long weekend, a four-pack of games found homes as Monday matinees in the Western Hockey League.

In Kamloops, Cole Kehler exacted revenge on his former club as the Portland Winterhawks shut out the Blazers. Down the highway, the Kelowna Rockets took advantage of the Blazers defeat by doubling up the high-flying Seattle Thunderbirds.

In northern B.C., the Spokane Chiefs edged the Cougars while down on the coast it was the Tri-City Americans getting past the Vancouver Giants.

Here’s how it all happened…

Cole Kehler kicked out 41 shots, backstopping the Portland Winterhawks to a 4-0 win over the Kamloops Blazers and collecting his first career WHL shutout Monday afternoon.

Kehler, the former Blazer and a product of Altona, MB, was particularly busy in the third period, making 18 saves as Kamloops pushed to erase a 3-0 deficit.

Keoni Texeira scored his 10th of the season midway through the first period to give the Winterhawks a 1-0 advantage.

Captain Keegan Iverson returned from injury Monday afternoon and notched his 15th goal of the campaign on a power play 4:02 into the second period, providing necessary insurance for Portland. Then, in the late stages of the middle period, Joachim Blichfeld remained hot, tallying his 24th goal of the season to give the Winterhawks a 3-0 lead after 40 minutes of play.

For Blichfeld, the dastardly Dane has scored in three consecutive games and in five of his last six outings, marking up seven goals in the process. In his first season in the WHL, the 18-year-old product of Frederikshavn, Denmark, has collected 50 points (24G-26A) in 48 games.

Evan Weinger hit an empty net with 13 seconds to go in regulation, rounding out the scoring.

For Kehler, the win goes into the books as his 23rd of the season. The 19-year-old goaltender landed in Portland this past July, shipped south of the border in exchange for a seventh round pick.

Cody Glass (2A), Henri Jokiharju (2A) and Blichfeld (1G-1A) collected multiple points for the Winterhawks.

The game at a glance is presented by @Toyota – congrats, @kehler298 on the shutout!! pic.twitter.com/xUqnsgEP2U

The Kelowna Rocket scored four times in the third period, en route to a 6-3 win over the Seattle Thunderbirds Monday afternoon.

All of Kelowna’s third period scoring came in the final eight minutes of play, with Calvin Thurkauf sparking the surge by hitting the back of the net for his second of the day and 27th of the season to tie the affair 3-3.

Reid Gardiner struck for the seventh time this season to put the Rockets ahead only 24 seconds later. Then it was Carsen Twarynski, another newcomer, adding some insurance with his 11th goal of the season. Nick Merkley rounded out the third period barrage with his 17th goal of the year only 27 seconds later.

Thurkauf opened the scoring 2:16 into the first period and Leif Mattson restore the Kelowna lead after Ethan Bear’s 22nd of the season had drawn Seattle even.

Keegan Kolesar kept his hot hand going by registering his 17th of the season to once again knot the festivities before the first period ended. A second period power-play goal from Kamloops, B.C., product Ryan Gropp – his 23rd of the season – gave the Thunderbirds the 3-2 lead they carried into the final 20 minutes of play.

Between the pipes, Michael Herringer made 31 saves for his 24th win of the season.

On the flip side, the Rockets extended their own run to three games and pulled within four points of the second-place Kamloops Blazers. Kelowna also carries two games in hand on their Interior rivals.

The Spokane Chiefs scored twice in the third period, executing a 4-3 come-from-behind victory over the Prince George Cougars Monday afternoon.

Keanu Yamamoto scored his 22nd of the season 1:32 into the final period to knot the affair 3-3 before Jaret Anderson-Dolan tallied his 31st of the year the give the Chiefs the lead. Both markers came on the man advantage.

Hudson Elynuik put up a third power-play goal for the Chiefs, notching his 20th of the season in the second period. By the end of the day, the Chiefs went 3-for-10 on the man advantage.

Dawson Weatherill made 39 saves to earn his 11th win of the season.

The Tri-City Americans and Vancouver Giants traded blows Monday afternoon, but ultimately it was a second period marker from Parker AuCoin that stood as the eventual winner as the Americans claimed a 5-3 triumph.

Morgan Geekie opened the scoring with a power-play goal 4:18 into the first period before Jordan Borstmayer drew Vancouver even. Dylan Coghlan restored the Americans lead late in the first period, only to see Brendan Semchuk square the affair 36 seconds later and the two teams headed into the first intermission knotted up 2-2.

Riley Sawchuk registered his second of the season to put the Americans ahead 3-2 with 4:03 to go in the second period and then it was AuCoin notching the winner 59 seconds later.

Owen Hardy pulled Vancouver back within one only 1:24 into the third period but Jordan Topping added some additional insurance to seal the win for Tri-City.

Rylan Parenteau made 18 saves for his 21st win of the season.

Topping (1G-1A), Tyler Sandhu (2A) and Geekie (1G-1A) all hit the scoresheet multiple times for the Ams, while Semchuk (1G-1A) was the lone Giants to achieve the same.

The win put the Americans two points ahead of the Portland Winterhawks for third place in the U.S. Division, though Portland holds one game in hand.