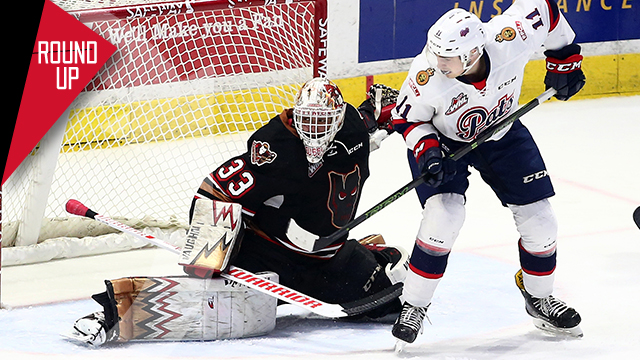 The Everett Silvertips reclaimed the U.S. Division lead with a 4-2 victory over the Seattle Thunderbirds Saturday night.

The Silvertips scored a 3-0 lead in the first period and never looked back. Connor Dewar, Devon Skoleski and Riley Sutter all found the back of the net in the opening 20 minutes of play.

Austin Strand got the Thunderbirds on the board late in the first period, but Patrick Bajkov restored the three-goal advantage 53 seconds into the third period.

Keegan Kolesar rounded out the scoring with his 25th goal of the season.

Carter Hart made 15 saves for his 28th win of the season.

The Silvertips now own a one-point lead atop the U.S. Division, with the Thunderbirds in second. Everett does own two games in hand.

The Kelowna Rockets won their fourth straight game with a 4-2 triumph over the Tri-City Americans Saturday night.

Dillon Dube logged two goals and one assist to fuel the Rockets.

The Americans took a 2-0 lead with first period goals from Jordan Topping and Brett Leason.

In the dying seconds of the second period, the Rockets comeback was kick-started as Dube scored his 14th goal of the season to make it a 2-1 game after 40 minutes.

Reid Gardiner registered his 14th of the campaign 4:06 into the third period to tie the affair before Nolan Foote notched the game-winner one minute later.

Dube hit an empty-net for his second of the night with 12 seconds to go in regulation.

Michael Herringer came on in relief of Brodan Salmond and turned aside all 15 pucks sent his way, collecting his 29th win of the season. At the other end of the rink, Evan Sarthou made 39 saves in defeat.

The Rockets are now within four points of the Prince George Cougars for first place in the B.C. Division. The Rockets also sit three points ahead of the third-place Kamloops Blazers. Kelowna has a game in hand on both the Cougars and Blazers.

Make it eight straight for the Moose Jaw Warriors.

The Warriors won their eighth game in row with a 5-3 triumph over the Medicine Hat Tigers Saturday night.

Trailing 3-2 after 40 minutes, the Warriors staged a third period comeback courtesy goals from Noah Gregor and Tanner Jeannot before Thomas Foster hit the 20-goal plateau by depositing his second of the evening into an empty net.

Yan Khomenko provided the other marker for the Warriors, while John Dahlstrom scored twice and Steven Owre added one more for Medicine Hat.

Zach Sawchenko steered aside 35 pucks for his 29th win of the season. Michael Bullion made 41 saves in defeat.

Owre (1G-1A) and Dahlstrom (2G) hit the scoresheet twice for the Tigers, while Jeannot (1G-1A), Brayden Burke (2A) and Foster (2G) did the same for the Warriors.

The Portland Winterhawks struck for their third consecutive victory with a 3-0 shutout of the Vancouver Giants Saturday night.

Cody Glass scored the game-winning marker on a power play 10:03 into the first period and Joachim Blichfeld provided insurance late in the second period. Ryan Hughes rounded out the scoring by collecting his 27th goal of the season 4:15 into the third period.

Cole Kehler made 12 saves for his 27th win and second shutout of the season.

The win keeps Portland within five points of both the Tri-City Americans and Victoria Royals as teams continue to jockey for playoff position. The Americans sit third in the U.S. Division, while the Royals own the first wild card seed in the conference. The Winterhawks carry one game in hand on Tri-City.

The #Winterhawks game at a glance is presented by @Toyota! Big ups to @kehler298 on the second career shutout! pic.twitter.com/1QvKZ28puV

Parker Kelly clicked for four points, including two goals, as the Prince Albert Raiders thrashed the Kootenay ICE by an 8-0 margin Saturday night.

Kolten Olynek and Cavin Leth scored in the first period before Simon Stransky, Vojtech Budik and Brayden Pachal piled on to make it 5-0 after 40 minutes.

Ian Scott made 25 saves for his 10th win and second shutout of the season.

Jansen Harkins recorded four points, including three assists, to lead the Prince George Cougars to a 6-1 win over the Kamloops Blazers Saturday night.

Garrett Pilon gave Kamloops a 1-0 lead 5:17 into the first period and it was all downhill from there for the Blazers.

Colby McAuley tied the game 54 seconds into the second period before giving his club a 2-1 lead 1:42 later. Shortly after the five-minute mark of the period, Jesse Gabrielle registered his 30th goal of the season and just like that, Prince George was out in front by a 3-1 count.

Nikita Popugaev made it 4-1 midway through the period and Jansen Harkins struck for his 20th goal of the season with 4:10 to go in the second period, giving the Cougars a commanding 5-1 advantage after 40 minutes.

Kody McDonald wrapped up the scoring 2:26 into the third period.

Ty Edmonds made 22 saves for his 29th win of the season. At the other end, Connor Ingram faced 57 shots, knocking away 51.

The win puts the Cougars four points ahead of the Kelowna Rockets for first place in the B.C. Division, while the third-place Blazers now trail Prince George by seven points and Kelowna by three points. Both the Cougars and Blazers have five games remaining in their respective regular season schedules.

4 pts each for Harkins and McAuley! 22 saves for Ty Edmonds and a SWEEP of the Kamloops Blazers! 6-1 the final score in PG!

Tyler Steenbergen scored 52 seconds into overtime as the Swift Current Broncos completed a come-from-behind 2-1 victory over the Red Deer Rebels Saturday night, clinching a berth into the 2017 WHL Playoffs in the process.

Dawson Martin gave the Rebels a 1-0 lead 10:33 into the second period, using a power-play opportunity to open the scoring.

With time winding down in the third period, rookie phenom Aleksi Heponiemi notched his 25th goal of the campaign to tie the game with 2:42 remaining in regulation, sending the game to extra time where Steenbergen ended it.

Taz Burman made 24 saves for his 14th win of the season, while Riley Lamb made 39 saves in defeat.

Heponiemi enjoyed a multipoint performance, tallying a goal and an assist.

With the win, the Broncos locked in a playoff position, currently sitting third in the East Division and trailing the second-place Moose Jaw Warriors by 12 points. The fourth-place Brandon Wheat Kings remain eight points back of the Broncos.

As for the Rebels, the single point keeps them three up on the Calgary Hitmen for third place in the Central Division.

Did somebody say #WHLPlayoffs?! That’s where #SCB are headed after 2-1 overtime win against @Rebelshockey

The Calgary Hitmen scored four times in the first period en route to a 6-3 win over the Regina Pats Saturday night.

Tristen Nielsen opened the scoring 5:24 into the proceedings only to have Braydon Buziak tie the game 1:36 later for the Pats. Then the Hitmen took control as Vladislav Yeryomenko, Matteo Gennaro and Beck Malenstyn scored to close out the first period, giving Calgary a 4-1 lead.

Adam Brooks notched his 34th of the season to get Regina back within two goals only 1:36 into the second period, but the Hitmen responded with goals from Jake Kryski and Luke Coleman to take a 6-2 lead into the third period.

Brooks found the back of the net for the second time on the night 8:28 into the third period, but it wasn’t enough to spark a comeback.

Kyle Dumba made 32 saves for his fifth win of the season.

The win moves the Hitmen within three points of the Red Deer Rebels for third place in the Central Division. Both Calgary and Red Deer have seven games remaining in their respective regular season schedules. The victory also gives the Hitmen a one-point edge on the Saskatoon Blades for the second and final wild card position in the Eastern Conference. Saskatoon also has seven games to play.

The Lethbridge Hurricanes won their sixth game in a row, edging the Saskatoon Blades 5-4 in overtime Saturday night.

The Blades actually carried a 4-2 lead into the third period before Zak Zborosky scored his 41st of the year and Giorgio Estephan notched his 30th of the campaign as the Hurricanes rallied to force overtime.

Braylon Shmyr struck three times – his 30th, 31st and 32nd of the season – to register the hat trick and Kirby Dach found the back of the net for the fifth time this season on behalf of the Blades.

Babenko also scored for the Hurricanes, while Estephan tallied his 29th of the season earlier in the contest.

Stuart Skinner made 30 saves for his 33rd win of the season.

The triumph moves the Hurricanes within two points of the Medicine Hat Tigers for first place in the Central Division. Both teams have six games left to play.

As for the Blades, they now sit one point out of the Eastern Conference playoff picture, trailing the Calgary Hitmen for the second and final wild card seed. Both teams have seven games to go.

What a comeback by the boys to complete an incredible road trip. The mood on the bus is summed up by @Homerhockey5, our awesome AT! #YQL pic.twitter.com/SlyeH4a0zB

Matthew Phillips scored his 46th goal of the season 2:42 into overtime, giving the Victoria Royals a 4-3 victory over the Spokane Chiefs and with it, a berth into the 2017 WHL Playoffs.

The Royals trailed 3-1 in the contest after Hudson Elynuik scored back-to-back goals 58 seconds apart in the second period. But Loch Morrison provided an almost-instant response for the Royals, tallying his third of the season 40 seconds later to get Victoria back within one. Regan Nagy then tied the affair with a power-play effort later in the period.

Hayden Ostir provided the other goal for Spokane, while Phillips hit the back of the net in the final minute of the first period for Victoria.

Griffen Outhouse made 37 saves for his 34th win of the season.

The win ensures the Royals of an appearance in the 2017 WHL Playoffs. As it stands, Victoria sits in the first wild card slot in the Western Conference, and only three points back of the Kamloops Blazers for third in the B.C. Division. The Royals have two games in hand on Kamloops.

The Royals clinch a playoff spot with a 4-3 victory in overtime over the Spokane Chiefs!