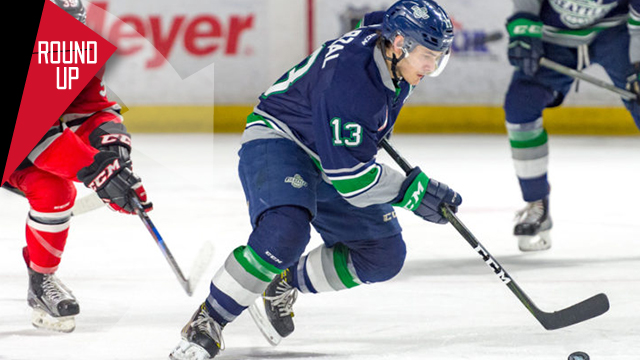 Another 10-gamer on Saturday’s WHL schedule and there were some delightful performances to speak of around the league.

For starters, Mathew Barzal continued his dominant play, posting up six points as the Seattle Thunderbirds maintained possession of first place in the U.S. Division.

The Medicine Hat Tigers and Michael Bullion blanked the Lethbridge Hurrricanes – bringing the ‘Cane Train to a screeching halt after a respectable run of 15 consecutive games without a regulation loss.

In Langley, Brodan Salmond and the Kelowna Rockets shut out the Vancouver Giants for the second night in a row.

In Moose Jaw, Carter Hart helped the Everett Silvertips back into the win column, stymieing the Moose Jaw Warriors.

The Regina Pats’ winning streak lives on, extended to 11 games after an overtime win in Red Deer.

Tristen Nielsen scored the winning goal in the eighth round of the shootout as the Calgary Hitmen edged the Swift Current Broncos 3-2 Saturday night.

The shootout was required after Brady Reagan scored his fourth of the season on a power play with 6:48 to go in regulation, tying the game 2-2 on behalf of the Hitmen.

Ryley Lindgren provided the regulation scoring for the Broncos, notching his 16th and 17th goals of the season.

Matteo Gennaro continued to batter the back of the net, tallying his 34th of the season in the second period. He also added an assist to complete a multipoint night.

Kyle Dumba made 21 saves, plus another seven in the skills competition, to claim his fourth win of the season.

Cole Fonstad scored the difference-maker as the Prince Albert Raiders secured a 4-3 shootout win over the Kootenay ICE Saturday night.

Fonstad’s marker ended an eight-round shootout as the two clubs duked it out for the bonus point.

Tied 1-1 heading into the third period, the final 20 minutes of regulation were busy for both sides. Vince Loschiavo hit the 20-goal plateau to give the ICE a 2-1 lead 1:07 into the third period before the Raiders scored twice in less than two minutes to turn the tables.

Parker Kelly made it a 2-2 game with 6:33 to go in regulation, then it was Curtis Miske striking 1:48 later to give the Raiders their first lead of the game.

With only 1:17 remaining in regulation, Colton Kroeker put his second of the night to the back of the net, tying the game 3-3 and forcing overtime.

Nicholas Sanders made 34 saves, plus another seven in the shootout, to earn his eighth win of the season.

Loschiavo (1G-2A) and Kroeker (2G-1A) helped pace the offense for the ICE, while Miske (1G-1A) was the lone Raider to collect a pair of points.

The Tigers victory put an end to a run of 15 straight games without a regulation loss for the Hurricanes.

Clayton Kirichenko notched his 10th of the season 3:47 into the first period on a power play to give Medicine Hat a 1-0 lead. James Hamblin’s 16th of the season came short-handed only 1:31 into the second period, providing some insurance for the Tigers.

Ryan Jevne, Fischer and Mason Shaw rounded out the scoring for the Tigers.

Bullion’s 19 saves helped him to his 14th win of the season and first career WHL shutout.

Kirichenko (1G-1A), Fischer (1G-2A) and Jordan Henderson (2A) served up multiple points for the Tigers.

That feeling when you get your first career shutout and snap the @WHLHurricanes streak. @Michael_Bullion pic.twitter.com/7EWgdvymtU

Carter Hart made 31 saves and Devon Skoleski had a goal and an assist to lead the Everett Silvertips to a 2-0 win over the Moose Jaw Warriors Saturday night.

Skoleski opened the scoring with his 11tth of the season 10:18 into the first period, before assisting on Eetu Tuulola’s insurance marker, which came 10:13 into the second period.

Hart’s 31 saves earned him his 21st victory and eighth shutout of the season. At the other end of the rink, Zach Sawchenko was also stellar, turning aside 32 of the 34 shots he faced.

The Regina Pats extended their winning streak to 11 games and reached the 40-win plateau, scoring a 4-3 overtime victory against the Red Deer Rebels Saturday night.

Josh Mahura tallied the game-winner, putting his 13th of the season to the back off the net 3:04 into overtime to give the Pats the win.

Austin Pratt and Connor Hobbs provided the only scoring through the first 40 minutes of play, as the Rebels and Pats entered the third period tied 1-1.

Adam Brooks scored his 31st goal of the campaign to give Regina a 2-1 lead only 26 seconds into the final period before Michael Spacek’s 24th of the year evened the score once again.

Red Deer took a 3-2 lead when Colton Bobyk sent a second consecutive power-play goal into the cage but Austin Wagner replied with his 25th of the season only 17 seconds later to knot things up once again.

Tyler Brown made 23 saves for his 25th win of the season. At the other end, Riley Lamb battled to turn aside 47 pucks in defeat.

For Shynkaruk, the goal was his second of the night and 26th of the season.

Outside of Shynkaruk’s overtime heroics, all the scoring occurred in the second period of play.

The veteran opened the festivities 9:35 into the middle period with a power-play effort before Ty Lewis’ 25th of the year – also on a power play – tied the game for Brandon. Josh Paterson restored the Saskatoon lead with an even strength tally but Stelio Mattheos was there to tie the game yet again, tickling twine with his 21st of the season.

Logan Flodell made 21 saves for his 17th win of the season.

Kale Clague (2A) and Nolan Patrick (2A) hit the scoresheet twice for Brandon, while Shynkaruk (2G) was the lone Blade to do so.

The win gave Saskatoon a three-point lead on the Calgary Hitmen for the second and final wild card position in the Eastern Conference.

Mathew Barzal collected an eye-popping six points, guiding the Seattle Thunderbirds to an 8-5 win over the Portland Winterhawks Saturday night.

The veteran prospect of the NHL’s New York Islanders scored once and continues to dish like a madman, adding five assists as the Thunderbirds remained undefeated in 12 consecutive games and held onto first place in the U.S. Division – one point ahead of the Everett Silvertips, who own one game in hand.

With 1:12 to go in the opening period, Barzal set up Reece Harsch for his third goal of the campaign as Seattle claimed a 3-2 lead after 20 minutes of play.

Alexander True scored an unassisted tally while short-handed to give the Thunderbirds a 4-2 lead 3:27 into the second period. Then it was Keegan Kolesar notching his 16th goal of the season 4:20 later on a power play, with an assist coming from – guess who? – none other than Barzal.

If the game wasn’t wild enough already, not to mention a goaltender’s nightmare, Joachim Blichfeld struck twice for his 22nd and 23rd goals of the season to pull Portland back within one before the buzzer sounded to end the second period.

Ethan Bear restored Seattle’s two-goal advantage with his 21st goal of the season – a power-play effort featuring an assist from Barzal – with 9:30 to go in regulation. But the Winterhawks didn’t wilt as Skyler McKenzie responded 46 seconds later to once again get Portland within one goal, trailing 6-5 with 8:44 to go in the third period.

But after McKenzie’s 46-second response, it was Ryan Gropp answering 33 seconds later to put Seattle back in a two-goal driver’s seat.

Rylan Toth made 29 saves for his 29th win of the season.

Glass (1G-2A) and Blichfeld (2G) did some damage on behalf of the Winterhawks, while the Thunderbirds received some widespread scoring. In addition to Barzal’s astounding six-point night, Gropp (2G-1A), Bear (1G-3A) and Kolesar (1G-2A) contributed in multiple ways as well.

Through 29 games since returning from the NHL’s Islanders, the 19-year-old Barzal now has 54 points (8G-46A) to his name.

Barzal talking about team win and how whole team bought in tonight with a short bench. pic.twitter.com/ewJWKlK5jR

The Spokane Chiefs got a pair of goals from Ethan McIndoe and managed to hold off a frenetic comeback attempt from the Tri-City Americans, securing a 4-3 victory Saturday night.

The Yamamoto brothers – Kailer and Keanu – combined to give the Chiefs a 2-0 advantage over a span of 41 seconds only 3:09 into the first period. Then, in the second period, it was McIndoe notching his 13th and 14th goals of the season as Spokane built a 4-0 lead through 40 minutes of play.

Brett Leason got the Americans on the scoreboard 1:40 into the third period before Tyler Sandhu made it a 4-2 game with 9:36 remaining in regulation. Juuso Valimaki’s 16th of the year pulled Tri-City back to within one, but that’s all the visits were able to muster as Spokane held on to claim two points.

Jayden Sittler made 16 saves to earn his 13th win of the season, though Dawson Weatherill was called upon in relief, making five saves late in the third period.

.@kailer_yamamoto shares his thoughts on the last minutes of tonight’s win against Tri-City! pic.twitter.com/yIvP2jmM1s

Brodan Salmond made 19 saves for his second consecutive shutout of the Vancouver Giants, as the Kelowna Rockets scored a 5-0 triumph Saturday night.

Salmond, an 18-year-old rookie from Calgary, pitched a 22-save shutout Friday night in a 6-0 win over the Giants back in Kelowna. Saturday’s goose egg in Langley was the third of the season for Salmond.

Calvin Thurkauf and James Hilsendager scored in the first period while Erik Gardiner, Lucas Johansen and Kole Lind struck in the second period to round out the Rockets’ scoring.

The victory served as Salmond’s ninth this season.

The win propelled the Rockets into third place in the B.C. Division – two points up on the Victoria Royals and with a game to spare.

The Kamloops Blazers scored three times on the power play en route to a 3-1 win over the Victoria Royals Saturday night.

Collin Shirley opened the scoring with his 23rd of the season, which came on the man advantage with only seven seconds to go in the first period.

Eric Florchuk tied the game with his third of the season only 1:37 into the second period but once again, a late power play stung the Royals as Deven Sideroff tallied his 31st of the campaign with only 53 seconds to go in the middle period.

For the third and final time, the Blazers struck on a power play in the final minute of a period as Rudolfs Balcers collected his 31st of the season with only 21 seconds remaining in regulation.

Dylan Ferguson made 36 saves for his 14th win of the season.

The victory boosted the Blazers to within four points of the idle Prince George Cougars, sitting atop the B.C. Division with 78 points and carrying a game in hand on Kamloops.

Blazers prevail with a 3-1 win in Victoria!!! Rudolfs Balcers with a late powrplay goal!