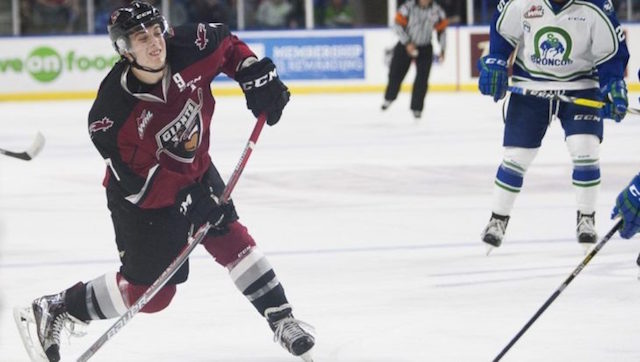 Another busy Saturday in the Western Hockey League saw the B.C. Division tighten up, while the two highest scoring teams in the WHL combined for a barn-burner in Medicine Hat.

We’ve got all the details…

Deven Sideroff scored the overtime winner to collect his second goal of the night as the Kamloops Blazers defeated the Tri-City Americans by a 4-3 margin Saturday night.

On the other side of the puck, Morgan Geekie registered a goal and two assists for the Americans, while Tyler Sandhu had a pair of assists as well.

Dylan Ferguson made 21 saves for his second win of the season.

Brad Morrison took care of all the offense while Ty Edmonds made 29 saves as the Prince George Cougars edged the Saskatoon Blades 2-1 on Saturday.

For Edmonds, the victory served as his league-leading eighth win.

Kyle Topping kick-started the Kelowna Rockets with a hat-trick performance in Seattle while Michael Herringer made 36 saves in a 5-1 win over the Thunderbirds.

Lucas Johansen and Jordan Borstmayer each had two assists, while Kole Lind provided a goal and an assist.

Outside of the division leading Cougars, only two points now separate the other four teams in the B.C. Division. Kamloops and Victoria sit in a tie for second place with 14 points, while the Rockets and Vancouver Giants, with 12 points, are hot on the heels of the Blazers and Royals.

Ty Ronning scored 2:31 into overtime, giving the Vancouver Giants a 2-1 victory over the Swift Current Broncos, maintaining pace in the ever-tightening B.C. Division.

Lane Pederson provided the lone goal for the Broncos, while Matt Barbers provided the game-tying tally in the first period.

Reigning Vaughn CHL Goaltender of the Week Ryan Kubic continued his strong play, making 28 saves for his six win of the campaign.

Noah Juulsen scored twice, Carter Hart made 37 saves and the Everett Silvertips knocked off the Victoria Royals 3-1 on a night in which only 12 shots were sent in on goaltender Griffen Outhouse.

Juulsen opened the scoring and then proceeded to close it with a shorthanded empty-netter.

Everett scored once in each period, while the Royals pounded 38 shots in on Hart over the course of the night, only solving him once. Regan Nagy was the only player to find a hole in the reigning CHL Goaltender of the Year.

Sophomore Ty Lewis had an impressive first-star night with a hat trick and an assist as Brandon routed Spokane at home. Lewis, a Brandon native, now has eight goals on the season – just two away from his rookie total last year. Despite not having the potential first overall 2017 NHL Draft pick in Nolan Patrick Saturday, the Wheat Kings got an extra pair of goals from Connor Gutenberg and another single from Reid Duke en route to the win. Dawson Weatherill and Jayden Sittler combined for 28 saves in a losing effort for the Chiefs.

Despite missing much of last year due to injury, Josh Mahura was selected in the third round by the Anaheim Ducks. The St. Albert, AB native seems to be rounding into form with a first-star effort on Saturday that included the primary assist on the game-winning goal before adding the insurance marker late in the third period. Winnipeg Jets prospect Michael Spacek added the Rebels’ first goal, while overager Tim Vanstone popped the Raiders’ lone marker.

The WHL’s two highest-scoring teams didn’t disappoint on Saturday night as Regina (62 GF) overcame Medicine Hat (59 GF) by an 8-5 score. Lane Zablocki picked up a hat trick and added an assist for the Pats while Austin Wagner notched a goal and three helpers in addition to posting a plus-6 rating en route to being named the game’s first star.

On the home side, Mark Rassell was named the game’s third star with a pair of goals in the loss while Texas product Max Gerlach potted a goal and an assist. Mason Shaw (4g-19a-23pts) had an assist and is now three points clear of Regina’s Sam Steel (9g-11a-20a) for the WHL scoring lead.