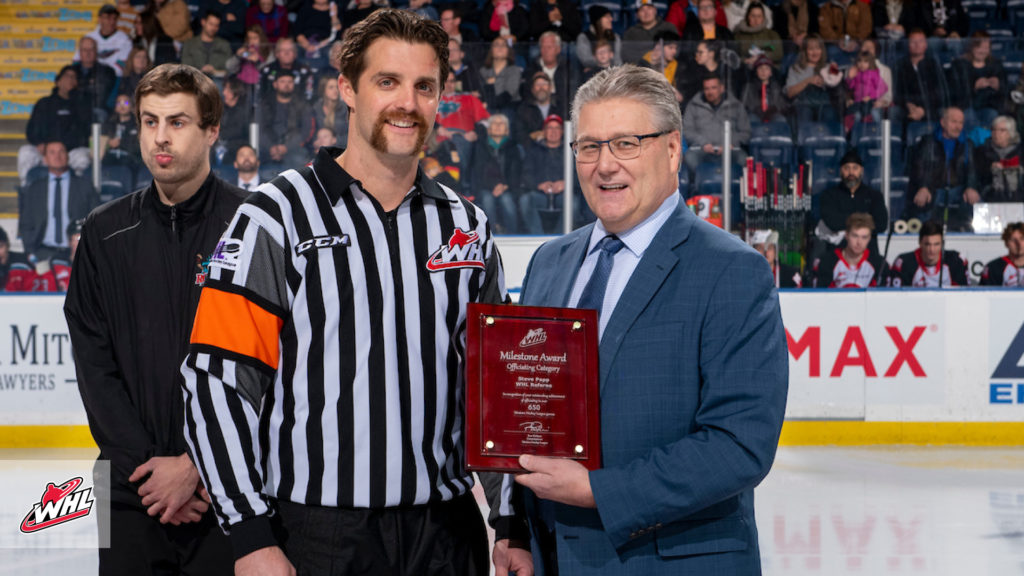 Kelowna, B.C. – The Western Hockey League announced today WHL Referee Steve Papp has been honoured with the WHL Milestone Award. Papp was recognized by WHL Senior Director, Officiating Kevin Muench in a special ceremony prior to tonight’s game between the Kelowna Rockets and Prince George Cougars.

The WHL Milestone Award is presented to WHL players, coaches, trainers, officials and WHL Championship teams for their outstanding achievements and service to the WHL.

“On behalf of the WHL and our member Clubs, we would like to extend our sincere congratulations to Steve on receiving this prestigious WHL Milestone Award,” commented WHL Commissioner Ron Robison. “Officiating in the WHL requires a tremendous commitment and we very much appreciate the extraordinary service Steve has provided to the WHL over the past 16 seasons.”

Papp, in his 16th season with the WHL and 14th as a Referee, began his WHL Officiating career in 2004 and has worked more than 650 regular season games. The native of Kelowna has skated in 10 WHL Conference Championships and six WHL Championship Series. In 2017 and 2018, Papp was part of the officiating crews for the Memorial Cup in Windsor and Regina, respectively.

Away from the rink, Papp has enjoyed a successful career with FedEx the past five years. Papp would like to express his thanks to Kristen, as well as his children, Hunter and Allie, for allowing him to pursue his career in officiating throughout the years.