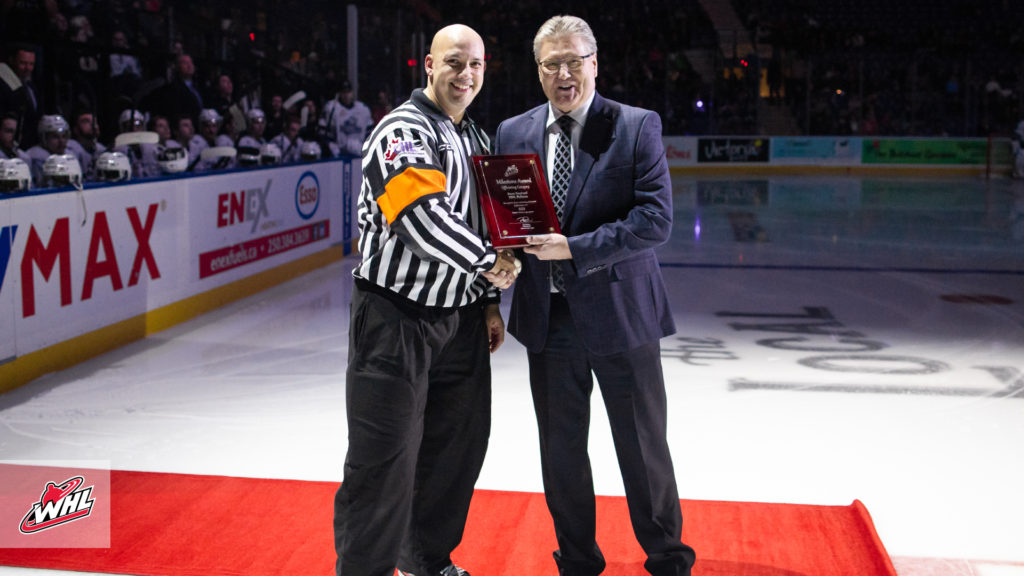 Victoria, B.C. – The Western Hockey League announced today WHL Referee Sean Raphael has been honored with the WHL Milestone Award. Raphael was recognized by WHL Senior Director, Officiating Kevin Muench in a special ceremony prior to tonight’s game between the Victoria Royals and Kamloops Blazers.

The WHL Milestone Award is presented to WHL players, coaches, trainers, officials and WHL Championship teams for their outstanding achievements.

“On behalf of the WHL and our member Clubs, we would like to extend our congratulations to Sean on being a recipient this year of the WHL Milestone Award,” commented WHL Commissioner Ron Robison. “A considerable commitment is required to be an official in the WHL, and Sean is deserving of this prestigious award after 16 seasons in our League.”

Raphael, in his 16th season with the WHL as a Referee, began his WHL Officiating career in 2004 and has worked more than 650 regular season games. The native of Surrey, B.C., has skated in four WHL Conference Championships Series and refereed the WHL Championship Series in 2013.

In addition to his work as a WHL Referee, Raphael has enjoyed extensive opportunities through officiating, having officiated the U SPORTS men’s hockey championship, the Allan Cup, as well as the World Junior A Challenge.

Away from the rink, Raphael has enjoyed a successful career as the Vice President of Programs – Referee in Chief for BC Hockey the past eight years. He is supported by his son Tennyson, and his wife Sarah.