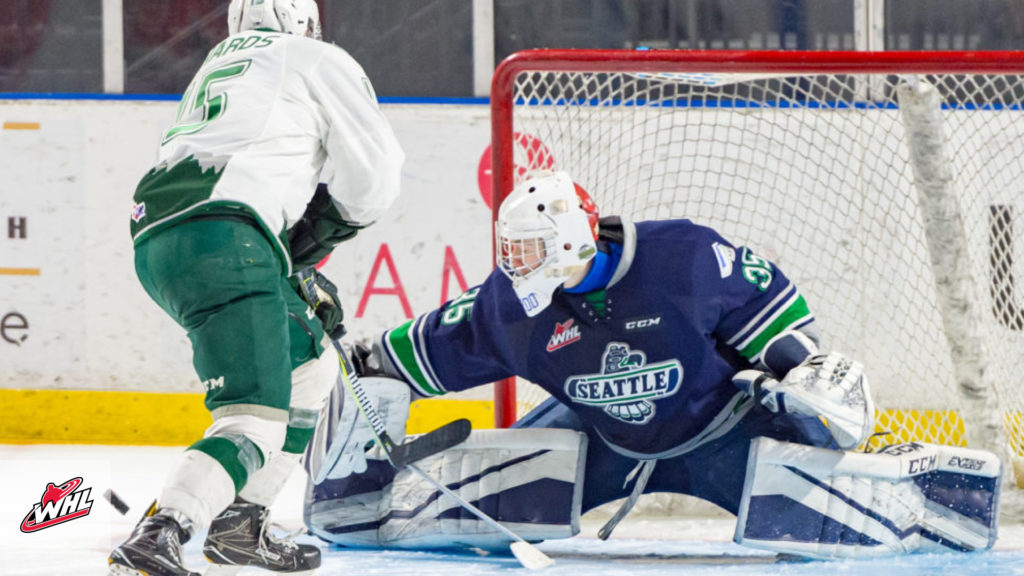 After a full 60 minutes of action and a scoreless overtime on Tuesday, the Seattle Thunderbirds and Everett Silvertips battled in nine shootout rounds to find a winner. Eventually, it was Seattle’s rookie forward Payton Mount notching the shootout-winner past Everett’s Blake Lyda.

While Lyda made 40 saves in the 65 minutes of action, it was Seattle’s Nolan Volcan and Graeme Bryks who led the initial charge by scoring power-play goals to put Seattle up 2-0. However, the 2-0 lead was quickly cut short by Sean Richards, who cashed Luke Ormsby’s feed to the net off a turnover at 13:41 in the first. Bryce Kindopp’s two-man advantage one-timer then led to an even score between the Thunderbirds and Silvertips after the first 20 minutes.

Seattle gained an edge over Everett again in the second period with a goal from Samuel Huo who was able to convert Dillon Hamaliuk’s post-to-post feed to make it 3-2 Thunderbirds a 7:33 in the period.

Facing a one-goal deficit heading into the third, Everett turned up the gas to push towards a tying score. Once again, sophomore forward Kindopp tied the game at 11:46 in the third after emerging out of a battle with the puck, walking out from the left circle and firing a snapshot past Seattle’s Eric Ward.

After a scoreless overtime, Kindopp found the back of the net once again in the first round of the shootout, but Richards couldn’t put away the game for Everett in the second round of attempts. In the third round, Seattle’s Zach Andrusiak kept the game alive with a blocker side wrister goal, and after a Matthew Wedman goal in the sixth round, it was Ormsby who kept Everett in the game with his successful five-hole bid. After two more unsuccessful rounds for each team, it was Mount who snuck in a backhand deke for the Thunderbirds in the ninth round. In an attempt to tie the ninth round, Everett’s Martin Fasko-Rudas fell short after the puck slipped off his tape on a forehand shot giving the Seattle Thunderbirds a 4-3 shootout win.

This moves Seattle’s pre-season record to 4-2-0-0 and Everett’s record to 2-1-1-2. The Silvertips will complete their pre-season “home-and-home” series with the Thunderbirds on Saturday, September 15 (7:05 p.m. PT).