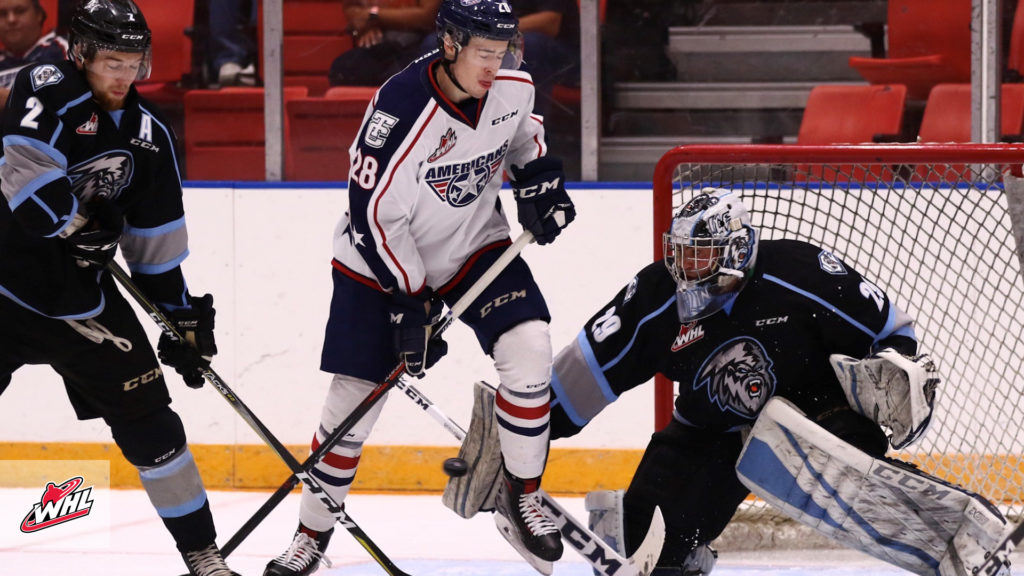 With a trio of games on the Western Hockey League Pre-season schedule Thursday, the road teams rose to the occasions, taking down their respective hosts as they moved within two weeks of the start of the 2018-19 WHL Regular Season.

The Seattle Thunderbirds took down the Spokane Chiefs by a 3-2 score to open a pre-season tournament at the Toyota Centre in Kennewick, Wash. Thursday afternoon.

After Adam Beckman’s league-leading fifth goal of the pre-season restored the Chiefs’ one-goal lead, the Thunderbirds found a response in the final minute of the middle period with Matthew Wedman recording his first of the pre-season. Entering the third period tied at two goals each, the Thunderbirds were the only team to find the back of the net in the frame as Wedman got his second of the contest.

Factoring in on all three goals was Nolan Volcan, who had a pair of primary assists and one secondary helper. Chorney added an assist on Spokane’s second goal for the multi-point effort.

Jake Lee and Noah Philp each added assists for the Thunderbirds while Nolan Reid and Riley Woods drew helpers for Spokane.

In net, Liam Hughes turned aside 24 of 26 shots for the victory. Campbell Arnold stopped 33 of 36 shots for Spokane in the narrow loss.

Three-goal outbursts in the second and third period powered the Saskatoon Blades to their fourth win of the 2018 WHL Pre-season Thursday at the Art Hauser Centre in Prince Albert, Sask.

Three-point games from Bradly Goethals and Kirby Dach led the way while Aliaksei Protas responded with a pair of assists for the Raiders.

After a scoreless first, goals from Josh Paterson, Goethals and Dach featured in the second for the Blades. Responding for the Raiders were Max Martin and Carson Miller who kept the deficit at a single goal heading to the third.

Goals from Michael Farren, Braden Plaschewsky, and Goethals burst the game wide open in the first half of the third period, giving the Blades a four-goal advantage. Brett Leason would find the back of the net for the Raiders later in the third, but that’s as close as the Raiders were come for the rest of the contest.

In his second pre-season appearance, Dorrin Luding stopped 16 of 19 shots for the victory. In his pre-season debut with the Raiders, Donovan Buskey stopped 17 of 23 shots.

A back-and-forth affair at the Toyota Centre saw the Kootenay ICE earn their first win of the pre-season Thursday, doubling up their hosts in the Tri-City Americans.

Led by a pair of goals from Cam Hausinger, the ICE managed to stay ahead or even with the Americans throughout the game. Hausinger opened the scoring 9:01 into the first, but Riley Sawchuk responded for the Americans to keep the game tied after 20 minutes.

Dallas Hines recorded his first goal of the pre-season, giving the ICE a one-goal lead heading to the third.

That lead would last until just 2:54 into the third when Paycen Bjorklund notched his third of the pre-season. With the game tied, Hausinger broke the deadlock with his second of the game.

Peyton Krebs would add an empty-netter to secure the victory.

Jonathan Smart and Matt Dorsey each had a pair of assists for the ICE and Americans respectively.

In addition to earning a primary assist on the ICE’s second goal of the game, Matt Berlin stopped 29 of 31 shots for the victory. Beck Warm stopped 37 of 40 shots in the loss.