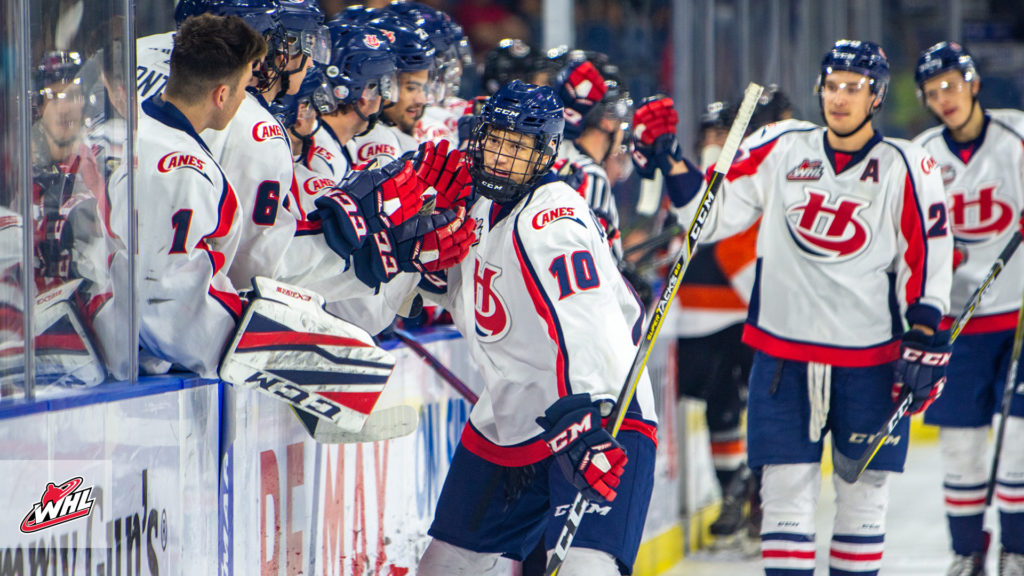 The first full weekend of the 2018 Western Hockey League pre-season is in the books with 24 of the 61 games taking place over the past four days.

After opening the entire pre-season Thursday, the Saskatoon Blades continued to roll along with wins over the Moose Jaw Warriors and Swift Current Broncos to remain undefeated. A three-goal second period powered the Blades to a 4-2 win over the Warriors Friday while a balanced attack of one goal per period was enough to sink the Broncos by a 3-1 score Saturday. A pair of rookies in Tristen Robins and Majid Kaddoura lead the Blades in scoring with three points each through a similar amount of games.

After beginning their pre-season with a 4-2 win over the Seattle Thunderbirds, the Giants topped the Chiefs in overtime Saturday before taking a shootout loss at the hands of the Tri-City Americans Sunday. Milos Roman (Calgary Flames) and Brayden Watts are leading the team with three points (2G-1A) each through the first three games.

For the Chiefs, they opened their pre-season with a 7-1 win over the Portland Winterhawks followed by two 3-2 decisions, the aformentioned loss in overtime to the Giants and a regulation 3-2 win against the Thunderbirds. Adam Beckman’s four goals through the first three games leads all Chiefs skaters while Luke Gallagher is tied for the scoring lead as well with four points (1G-3A).

While the Blades are the only squad sitting at 3-0-0-0, both the Calgary Hitmen and Victoria Royals are close behind with 2-0-0-0 records to remain perfect as well.

The Hitmen topped the Kootenay ICE by a 4-1 score before downing the Red Deer Rebels 3-2 in overtime Saturday. Zach Huber leads the way with a pair of goals while Mark Kastelic’s two points (1G-1A) also have him tied for the team scoring lead.

Playing twice in the Okanagan this weekend, the Royals downed the Kelowna Rockets 6-5 in a shootout before doubling up the Kamloops Blazers by a 4-2 score Saturday. Import forward Phillip Schultz leads the team so far in goals as part of a four-point effort (3G-1A). He’s tied with D-Jay Jerome’s four points (2G-2A) for the team lead.

Also earning four points in the standings through their first weekend of action were the Tri-City Americans (2-1-0-0) and Everett Silvertips (1-0-1-1). The Americans earned a 4-3 shootout win against the Silvertips to begin the season, took a 2-1 loss at the hands of the Winterhawks, but rebounded to down the Giants in a shootout Sunday. Isaac Johnson’s four points (2G-2A) leads the team so far. Goaltender Talyn Boyko is 2-0-0-0 on the preseason, stopping 70 of 75 shots sent his way in 120 minutes of action.

The Silvertips played to three different results this weekend while hosting their pre-season tournament. Taking a 4-3 shootout loss Friday at the hands of the Americans, they were downed 5-4 in overtime the following night by the Thunderbirds. The Silvertips were triumphant in their final game of the weekend, downing the Winterhawks by a 3-0 score for their first victory of the pre-season. With five points (1G-4A) through the three games, captain Connor Dewar (Minnesota Wild) is tied for the scoring lead among all WHL skaters in the pre-season.

Friday, the Tigers were topped by the Hurricanes 5-4 in overtime in Lethbridge. When the two teams met in Taber, Alta. the following night, it was the Tigers who had the last laugh, doubling up their rivals by a 6-3 score. Cole Sillinger, Josh Williams, and Dawson Heathcote lead the team through its first two games with three points each.

The Rebels played their opponents to the north and south of the Queen Elizabeth II Highway. Friday, they opened their pre-season with a 6-5 win over the Edmonton Oil Kings before falling in overtime to the Hitmen Saturday. Dawson Barteaux (Dallas Stars) led the Rebels through their first weekend of pre-season action with three points (1G-2A).

A logjam of six teams split their first two games of the pre-season as the Oil Kings, Blazers, Hurricanes, Warriors, Prince George Cougars, and Regina Pats all held steady at 1-1-0-0.

The Oil Kings were downed by the aforementioned Rebels, but responded with a 4-2 win over the Kootenay ICE. Vladimir Alistrov, the second overall selection from the 2018 Canadian Hockey League Import Draft, is one of four Oil Kings players tied for the team scoring lead with a pair of points.

A strong start for the Blazers saw them blank the Cougars by a 5-0 score Friday before their 4-2 loss to the Royals. Logan Stankoven, the fifth overall selection from the 2018 WHL Bantam Draft, is one of five Blazers skaters tied for the team lead with two points.

The Hurricanes split their home-and-home series with the Tigers, winning at home before losing as the away team in Taber, Alta. the following night. Keltie Jeri-Leon leads the Hurricanes with three points (1G-2A) in pre-season play.

After taking a 4-2 loss to the Blades in their opening game of the pre-season, the Warriors rebounded to beat the Pats by the same score. Justin Almeida (Pittsburgh Penguins) is one of three Warriors tied for the team lead with two points each.

Taking a 5-0 shutout at the hands of the Blazers, the Cougars rebounded to win their second pre-season game, a 4-2 victory over the Rockets. Tyson Upper leads the Cougars in pre-season scoring so far with three points (2G-1A).

Beginning the second century of their franchise, the Regina Pats earned a 4-1 win over the Broncos before losing a 4-2 result to the Warriors. Marco Creta led the Pats in scoring through the first weekend with three assists.

The Winterhawks and Thunderbirds were the two remaining teams to take a victory from their opening weekend of pre-season play. A 2-1 win over the Americans was coupled with losses of 7-1 and 3-0 to the Chiefs and Silvertips respectively. Ty Kolle led the Winterhawks with a pair of points (1G-1A).

In addition to a 5-4 overtime win over the Silvertips, the Thunderbirds lost 4-2 and 3-2 games to the Giants and Chiefs respectively. Import forward Andrej Kukuca has provided an immediate impact for the Thunderbirds with five points (1G-4A) to tie for the scoring lead among all WHL skaters in pre-season play.

The Rockets picked up a single point this weekend, taking a loss in the shootout to the Royals before getting doubled up by the Cougars. Liam Kindree leads the Rockets with three points (1G-2A) in pre-season play.

The Brandon Wheat Kings remained idle as their first of four pre-season games is scheduled to take place Friday, September 7 (7:30 p.m. CT) when they play host to the Pats.

Still searching for their first win of the WHL pre-season are the ICE and Broncos, who each took a pair of losses this weekend.

Ethan Regnier and MacKenzie Wight accounted for the Broncos’ offence as they lost by 4-1 and 3-1 scores.

For the ICE, a 4-1 loss to the Hitmen and 4-2 defeat at the hands of the Oil Kings made up their weekend. Cole Muir led the ICE in scoring with a pair of assists.