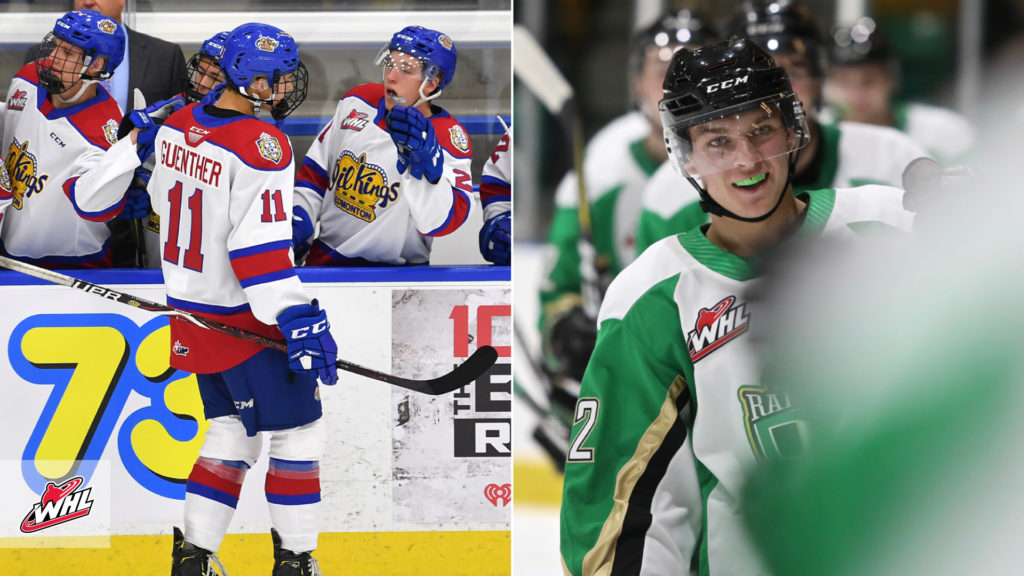 The Eastern Conference’s two division champions from the 2018-19 Western Hockey League Regular Season, the Prince Albert Raiders and Edmonton Oil Kings, are in the win column for the 2019 WHL Pre-season.

In total, five mid-week games have brought team and fans further into the 2019 WHL Pre-season as the new regular season fast approaches.

Tuesday’s contest at the Downtown Community Rink in Edmonton, Alta. featured a pair of goals from Dylan Guenther, the first-overall selection from the 2018 WHL Bantam Draft, as well as a goal and an assist from New York Rangers defensive prospect Matthew Robertson. Splitting the goaltending duties three ways, Sebastian Cossa, Kolby Hay, and Colby Knight combined to stop 30 of 32 shots. Mason Ward and Jace Weir scored for the Rebels in the loss.

Wednesday’s action saw both the Raiders and Swift Current Broncos claim 4-2 victories. The Raiders’ win came in the friendly confines of the Art Hauser Centre as a pair of goals from Evan Herman and 29 saves from Boston Bilous powered them to the victory. Eric Alarie continued to impress with his fourth goal of the pre-season while Tate Popple also scored for the Warriors.

At the Irvine Sports Complex in Irvine, Alta., the Broncos doubled up the Medicine Hat Tigers by a similar score. Josh Davies’ fifth goal of the pre-season came 6:15 into the third period and counted as the game-winning goal. In net, Jordan Fairlie and Reid Dyck combined to stop 19 of 21 shots in the contest. Jaxon Steele and Noah Danielson scored for the Tigers in response.

Thursday’s action was favourable to teams sporting red, white, and blue on their uniforms.

In Swift Current, the Regina Pats earned a 3-2 shootout victory against the Broncos with Ty Kolle notching the lone goal of the shootout. Max Paddock stopped 25 of 27 shots through 65 minutes, then made three more in the shootout to earn the win. Ethan O’Rourke had a goal and an assist for the Broncos in the loss.

South of the 49th parallel, the Tri-City Americans opened hosting duties of their pre-season tournament with a 5-3 win against the Portland Winterhawks. Connor Bouchard scored twice, including the game-winning goal, while Talyn Boyko kicked out 33 of 36 shots sent his way. Seth Jarvis led the offensive performances for Portland with a goal and an assist.