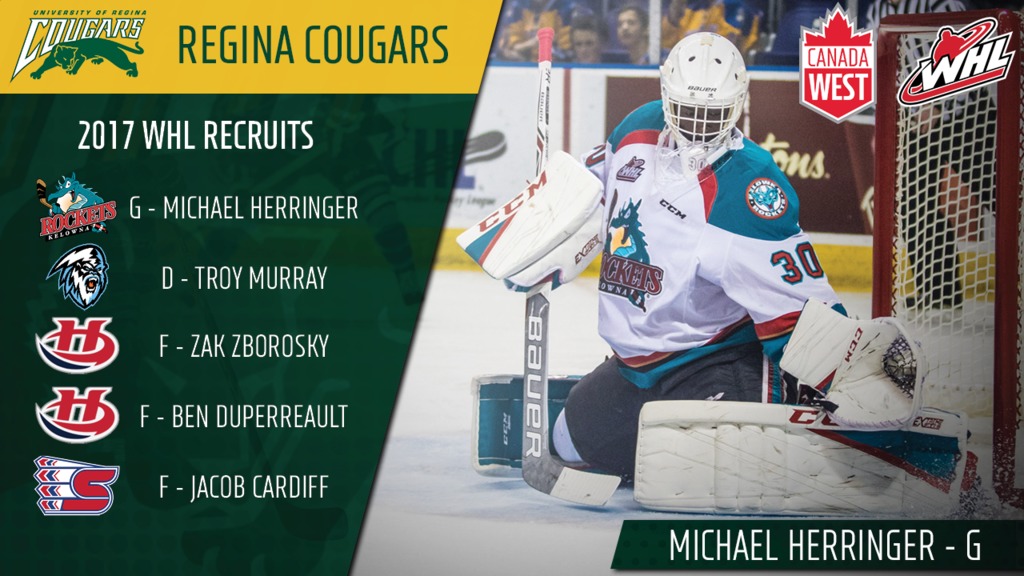 If the Regina Cougars are going to claw their way back into the Canada West playoffs this season after a four-year absence, Todd Johnson’s latest recruiting class will surely play a major role.

Johnson, who’s entering his sixth season behind the Regina bench, will once again welcome a handful of former Western Leaguers he hopes can spark a resurgence in the Queen City.

And when it comes to the pieces that make up Johnson’s latest recruiting puzzle, the biggest ones are clear – forward Zak Zborosky and goaltender Michael Herringer.

Together, the pair represent two of Johnson’s best recruits since taking the reins of the Cougars prior to the 2012-13 season.

Zborosky, a Regina native, heads home following an outstanding four-year career in the WHL, where he recorded 203 points in 262 regular season games. The 6-foot-0 forward had a career season as a 20-year-old in 2016-17, registering 74 points combined between Kootenay and Lethbridge. That scoring touch will be a welcome addition to a Regina team that scored a conference low 60 goals last season.

“He scored goals (in junior) and he’s going to score for us this year, but I think more importantly as we move forward, he’s going to be a guy that hopefully will bring a few more of these local guys and they’re going to want to stay here,” added Johnson of Zborosky, who was a standout at the midget AAA level with the Regina Pat Canadians before going onto the WHL.

The former Kelowna Rocket enters the goaltending fold in Regina with the No. 1 job within grasp after Regina struggled last year in between the pipes, posting a combined 4.47 GAA and .872 SV%.

Herringer joins the Cougars with a proven WHL track record, which saw him hold down the starting job each of the last two seasons for Kelowna, following in the footsteps of former Rocket netminders like current Saskatchewan Huskies standout Jordon Cooke (Kelowna – 2010-2014).

“Something I’ve felt we’ve really needed to improve upon from the last couple of years has been our goaltending. When I think of all the starting goaltenders in our league, they’re all graduates of the Western League,” said Johnson. “It was very important for us to get a 20-year-old graduate from the WHL and I think Michael is going to do a great job for us.”

If Herringer and the rest of his recruiting classmates take Regina back to the post-season, the 2014-15 WHL champion will have no shortage of WHL playoff experience to lean on, after playing a combined 25 playoff games over the last two seasons.

“He’s a very competitive guy and he knows how to win. He’s been in an organization that has produced teams that have won. When you look at our league where we play two games a weekend, it’s almost like every game is a playoff game and with his experience I really think he’s going to shine for us.”